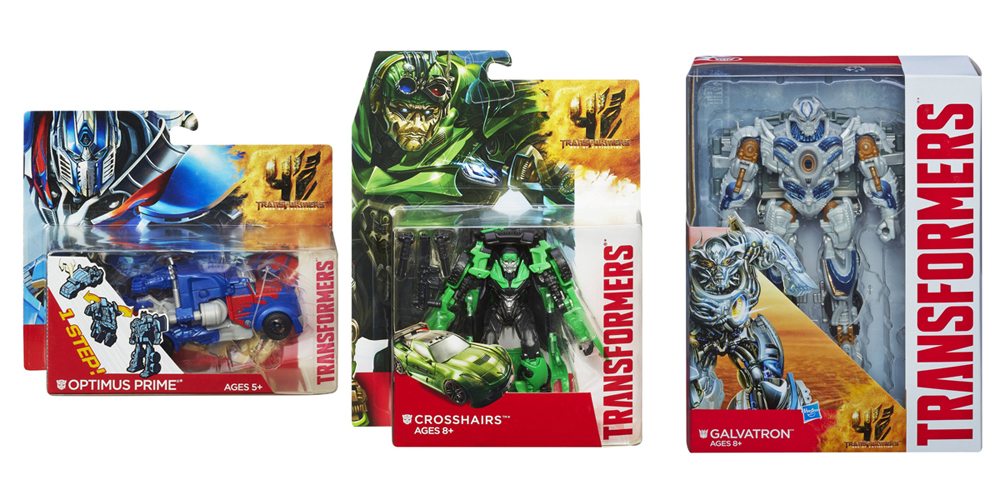 While Michael Bay’s Transformers certainly aren’t my favorite incarnation and the latest film in the franchise, Age of Extinction, seems to have been the worst reviewed to date, it’s hard to deny the cultural impact of this particular flavor of our beloved “Robots in Disguise.” Between a $967 million worldwide gross and the landmark 30th anniversary of the property as a whole, it’s no surprise that Hasbro has rolled out a robust line of movie tie-in toys and action figures. Let’s take a look at how they stack up. 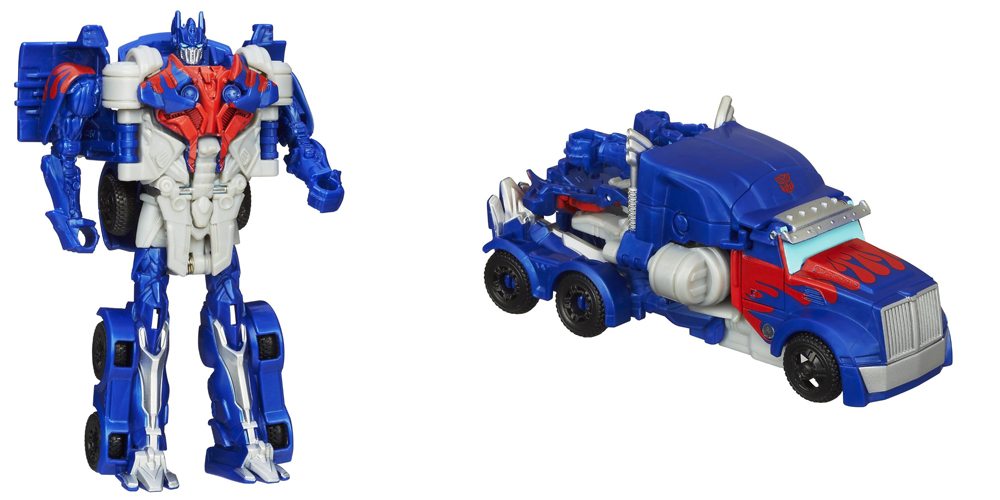 Transformers: Age of Extinction One-Step Changers
The Good: This isn’t Hasbro’s first attempt at an incredibly kid-friendly Transformer design, but, unlike many of its predecessors, the One-Step Optimus Prime figure I was provided for review actually succeeds on the two most fundamental levels. First, the little guy actually looks like the movie Optimus – obviously it’s slightly bulky around the torso because of its hyper-functional design leanings, but a smart variation in plastics and delicately applied paint serve to give it some eye-catching details. More importantly, the transformation mechanism, a cleverly concealed button above the windshield, does a fine job of effortlessly converting the Big Bot to his true form. To return to alt-mode you just pull up the cab compartment on his back and everything else slides into place, which, again, works very well.
The Bad: I’ve noticed some complaints regarding the fragility of this toy, but the kids and I have been playing with ours for weeks without incident. My only real knock is the lack of articulation, but given the quick-change design I’m inclined to say the fact that you can move the head and arms at all is a win.
The Ugly: While robot Optimus looks pretty good, the massive pile of limbs and chest components sitting there on the fifth-wheel coupling in truck form looks a little silly. 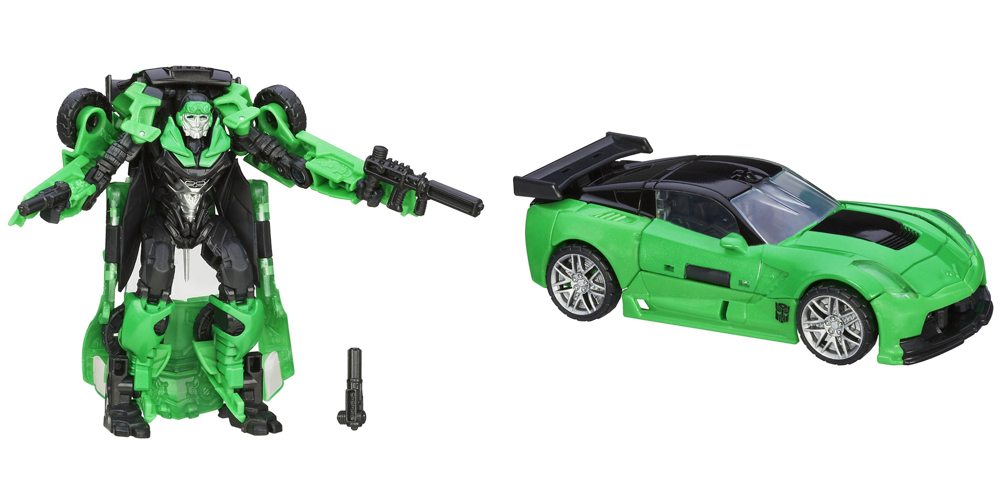 Transformers: Age of Extinction Generations Deluxe Class
The Good: The Deluxe Class figures are sort of the noble middle class of the continuing Transformers Generations line; they bring a lot of value at a mid-grade price point, and the Crosshairs fig I received is no exception. This Autobot from the G1 Targetmaster era has been re-imagined as an ultra-modern Corvette Stingray, and this alt-mode is flawless, boasting vibrant two-tone paint and some really sharp styling.
The Bad: With an eight-step transformation process, Crosshairs seems like a pretty straightforward figure, but elements like the prominent multi-hinged shoulder joints can prove problematic in both posing and play. Also, for an Autobot weapons specialist, Crosshairs bundled firearms, two-minimalist pistols and an SMG, seem a tad uninspired.
The Ugly: Poor Crosshairs; so sleek on the screen, but not so much in toy form. His robot mode is, sadly, hampered a bit by the detail of his alt, with the Stingray frame hanging loosely of his back. I do, however, have to give Hasbro props on the inclusion of flexible, rubberized side panels that actually add some much needed visual appeal to this “trench coat” effect. 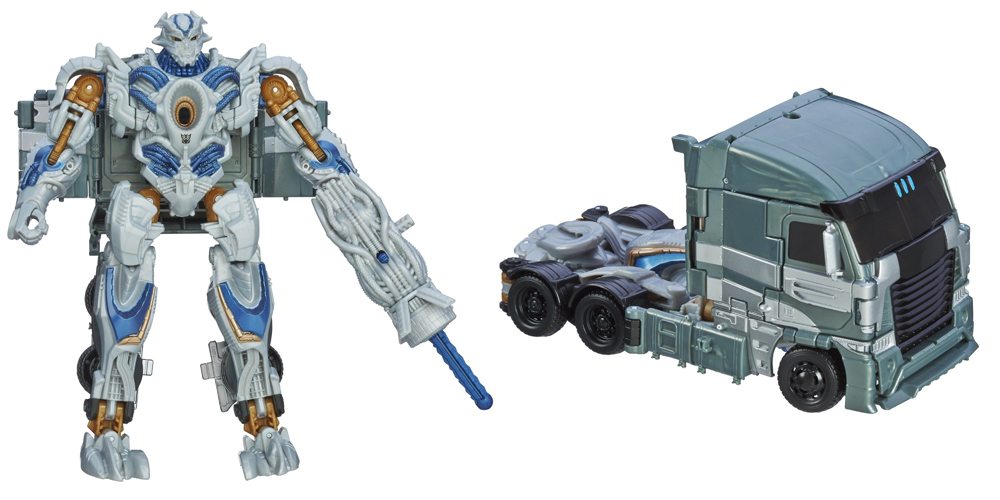 Transformers: Age of Extinction Generations Voyager Class
The Good: With a bigger size and a more ambitious conversion process, the Voyager Class is a step up from Deluxe. Further, with most of his robotic appendages folding into the cab of his (very G1 Motormaster-esque) alt-mode, the Voyager Class Galvatron is also what is commonly referred to in fan circles as a “shellformer.” While this means the robot mode of this particular version of the second coming of Megatron has to contend with a lot of back bulk, the overall figure sculp is impressive – even to those of us who aren’t crazy about the techno-organic, sinewy lines of the movie bots.
The Bad: With twice the number of steps as Crosshairs, Galvatron’s transformation can be a little daunting to younger fans. But isn’t that what GeekDads are for?
The Ugly: While the winglike protrusion of the collapsed truck cab on his back is a little distracting, Galvatron looks almost as good in robot mode as he does in his throwback alternate form. 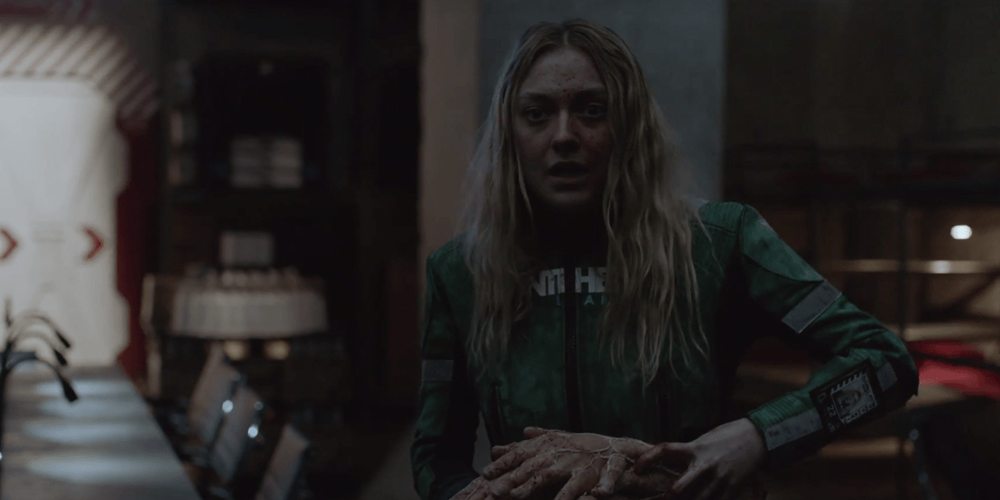