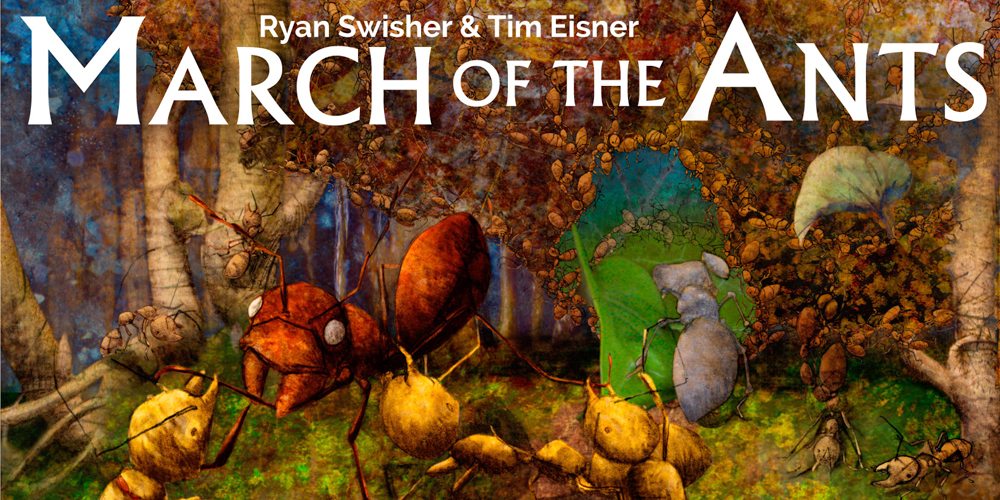 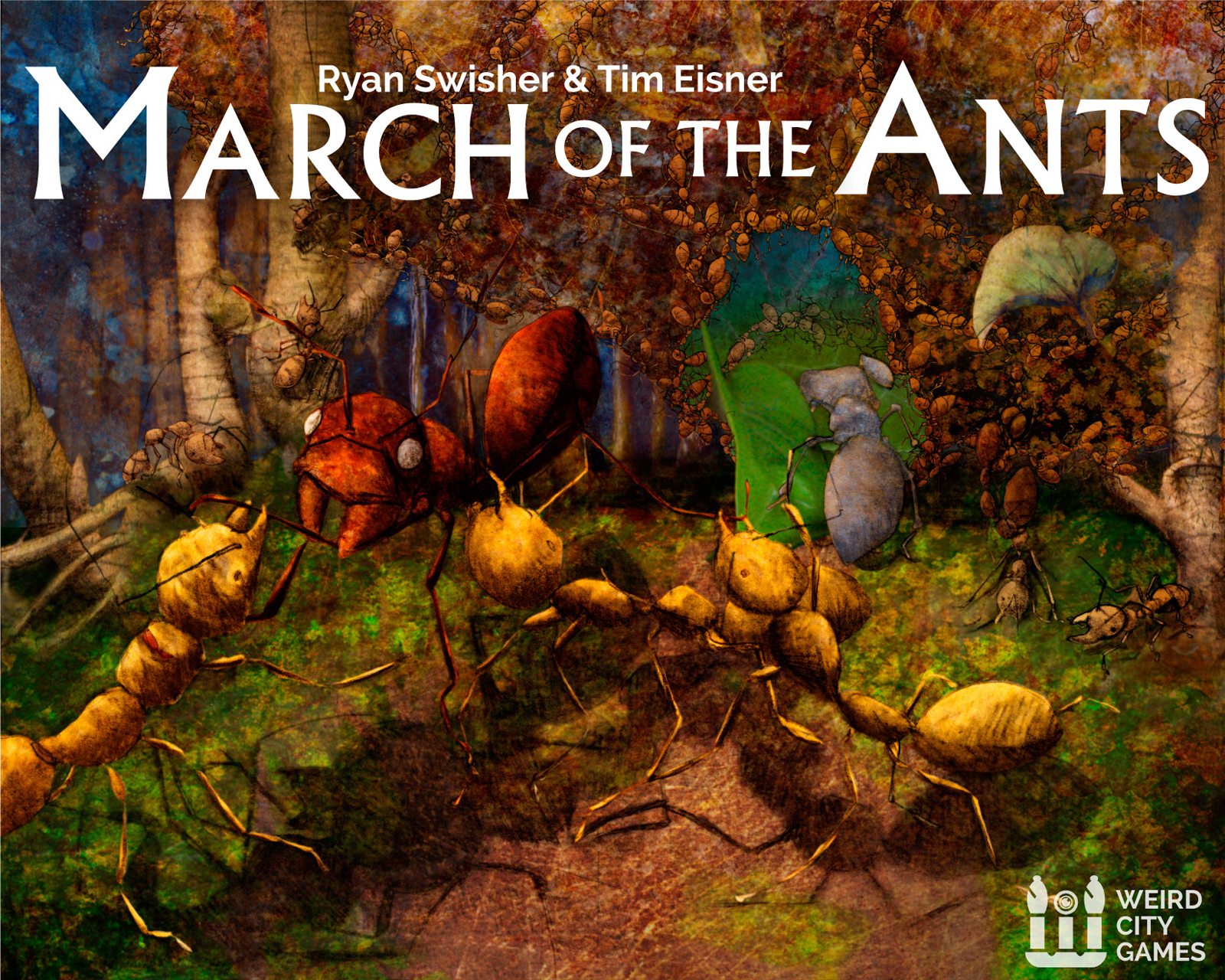 Remember that game Sim Ant? It never quite got as popular as its predecessor, Sim City, but I thought it was pretty cool controlling a colony of ants. In March of the Ants, an upcoming board game from Weird City Games, you get to take charge of an ant nest, looking for spots to gather resources and breed new larvae, while evolving to become better soldiers, workers, and queens.

At a glance: March of the Ants is for 2 to 4 players, ages 13 and up, and takes a little over an hour to play. It is currently on Kickstarter, and the pledge level for a copy of the game is $35. Based on a couple plays, I would say you could potentially play it with younger players if they’re fairly experienced gamers, but otherwise 12 or 13 is probably a good suggestion. Thematically there isn’t really anything objectionable, so it’s mostly the game’s complexity and depth that makes the game unsuitable for very young players.

As you can see from the image above, there are a lot of components in this game:

I’ve played with a prototype and I’ve seen the game evolve based on playtesting. I don’t know if the artwork or layout will change any more from what’s pictured above, but the designers are pretty responsive based on what makes the gameplay easier to learn and understand.

The player nest mat has spaces for the larvae and food, as well as your ant evolution cards. It also serves as a turn order reminder, explaining the different actions you may take on your turn and how various bonuses work. There’s a separate player aid card that has more information about end-game scoring and how battles are resolved.

The wooden cubes are used as ants when they’re on the board, larva when they’re on your player mat (in the larvae chamber), and eggs when they’re in the supply. I’ve seen people in the Kickstarter comments asking for ant meeples or miniatures, but I think the cubes work pretty well, particularly because there are so many of them. It starts getting messy (and thematically weird) if you have a bunch of ants in your larvae chamber, I think.

The artwork that I’ve seen is not your typical fantasy style painting, nor is it photorealistic, though the ant parts are based on actual types of ants, including their scientific names. There is some humor involved (like the Wormhole, a tunnel made by an actual earthworm) but it’s mostly a serious game, with some cards including fun facts about the specific ant species represented.

The object of the game is to have the most points at the end of 4 or 5 rounds (depending on number of players). You get points for evolving your ant, winning battles, and for occupying certain locations in the meadow. You also gain points for meeting the requirements on Colony Goal cards that you play, as well as having the most larvae, food, or remaining cards at the end of the game.

To set up, each player gets a player mat and all the cubes of their color. The Great Tunnel is placed in the center of the table, and the rest of the Meadow hexes are shuffled and placed face-down in a stack. (There are some starting hexes which get shuffled and placed on top.) Each player puts five cubes of their color in their larvae chamber, one cube in the Great Tunnel, and one cube on the scoring track. The rest of the cubes go into a supply next to the player mats. The cards are shuffled and placed in a stack, and all the food and tokens are placed in a supply. Everyone starts with some food (based on number of players), and a marker in the Great Tunnel also tracks the current round.

Each round consists of a few phases: Worker, Soldier, Queen, and Slumber.

The Worker phase is the bulk of the round: players take turns choosing actions—for some actions, the other players may choose to perform the accompanying secondary action for free. Here are the choices:

Explore: Pay one food, and then draw and place a new hex. (Secondary action: place a larva from your larvae chamber onto a hex you inhabit or the Great Tunnel.)

March: Pay one food, and then make up to five moves, either placing larva from your larvae chamber onto the board (turning it into an ant), or moving ants into adjacent hexes. (Secondary action: move one ant one step.)

Forage: Pay one food, and then draw two cards from the deck. (Secondary action: Gain one larva—take a cube from the supply and put it in your larvae chamber.)

Card: Play a card from your hand, paying the ant cost by discarding ants from the board or larva from your chamber. Events are one-time effects; Evolution cards are placed on the ant body on your player mat; Colony Goals have effects and then a victory point condition if you can fulfill them. (Secondary action: discard a card and draw a new one.)

Colony Goals include things like having more larvae or food than your neighbors, inhabiting specific types of hexes or the Great Tunnel, or even peacefully coexisting with other players. Event cards may let you steal evolution cards from other players, take extra moves, or even wipe out a lot of ants with a Sparrow Attack. The body parts all have specific bonuses, and the card you have at the top of each stack is the one that is active. However, the number of body parts in each stack also gives you bonuses: Heads give you extra power during battles; Thoraxes reduce the cost of Event cards; Abdomens let your ants eat less food during the Queen phase.

Rest: Resting is basically passing and being done for the round. The first time you rest in a round, you gain a larva. On subsequent turns, you must continue to rest but then you’ll get food instead. You can’t perform any other actions in this Worker phase but you’ll still get free secondary actions. (No secondary action.)

Once two nests have chosen the Rest action, the Worker phase ends, and it’s on to the Soldier phase. During the Soldier phase, you resolve battles. Each hex has a certain number of collection spaces, which can hold one ant each. If there are more ants than spaces in any hex, then a battle takes place. Each hex has one space that’s marked as a “defender” space, and so then the battles take place between the defender and the invader with the most ants. Some hexes may also have centipedes present, in which case the defender must battle the centipede (perhaps in addition to fighting an invader).

Your attack value is the total number of ants, plus the number of Head evolution cards you have on your player mat. You may also choose to play a card face-down from your hand—each one has a “Pow” value between 1 and 4, which is added to your attack. Whoever has a higher number wins, and the defender wins ties. The winner destroys enemy ants equal to the number of ants they have in the hex, but the loser also destroys some ants as well (half of their starting number of ants). Finally the winner gets a point, and may move their ants into empty collection sites.

Some hexes also have centipedes on them, in which case the defender has to battle the centipede. Basically the centipede will get the attack value of the top two cards from the deck—if you win, you get a point and a food; if the centipede wins, it destroys a number of ants equal to its total attack value. So centipedes can be as weak as 2 power or as strong as 8 power.

Queen phase: First, everyone harvests—you gain whatever resources are associated with the collection sites that you occupy: food, larva, cards, or points. Then you must feed your ants: 1 food feeds 4 ants on the board. For any unfed ants, you discard one larva each from your larvae chamber. After feeding, everyone gains either 2 food or 5 larvae (except in the last round).

Finally, there’s the Slumber phase. Each player gets a point for every meadow hex they’re defending that is adjacent to the Great Tunnel. You also get points for any of the Colony Goal cards that you currently fulfill. The round marker is advanced, and then it’s the next turn.

I met Tim Eisner, one of the game designers, last summer through a mutual friend, and I’ve gotten to see March of the Ants evolve over the course of the year, but even from the start it was a fascinating game. It has a little bit of everything: area control, resource management, action cards, battles, exploration and tile-laying. And yet it still plays pretty smoothly.

I really like the way that when you select an action in the Worker phase, the other players get a secondary action. It keeps everyone in the game even when it’s not their turn. Another thing I like is that there are multiple paths to victory. Just because you manage to put a lot of ants out on the board doesn’t mean you’re going to win—all of those ants will need to be fed, which means you have to find ways of getting food, rather than being able to spend your food on cards. Because there are various ways to get points, you can decide whether to go for area control, military victory, or focusing on your own evolution. Or maybe you go exploring to find those valuable point-collection sites.

With the modular board and the different combinations of ant body parts, there’s a lot of replay value. Your strategies will change based on the types of cards you get, the locations that appear in the meadow, and the actions of your opponents. Some of the meadow hexes have special effects: for instance, the Centipede Nest keeps generating new centipedes, which can spread to surrounding hexes. Last night Eisner and his fellow game designer Ryan Swisher had a Kickstarter launch party at Guardian Games, and I went out and played it again (and won!).

Basically, if the phrase “a strategy game about ants” makes you perk up your ears, then you’ll probably enjoy this game. It’s pretty much exactly what you’d expect and want from a game called March of the Ants. I also think the price point is really great for the amount of game you’re getting, with so many heavier games these days going for $50 and up.

For more information, visit the March of the Ants Kickstarter page.