Today’s Word Nerd starts with an abbreviation. Just for the sake of symmetry, we’ll also end with one. We’ll look at the difference between cue and queue, and we’ll throw in que and kew for good measure.

Cue: 1. a signal indicating when an action is to occur or that triggers a response, or the act of providing such a signal.
2. a long, tapering rod used to strike a ball in games such as pool or billiards, or a stick used to propel the disks in shuffleboard.

The first definition comes from the letter q, which was written into the margin of acting scripts to indicate when the actor was supposed to do something; the q stood for quando, the Latin word for when. Eventually, around the mid-1500s, somebody started spelling out the phonetic pronunciation of the letter, creating the word. 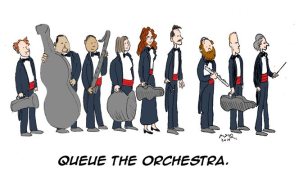 Queue: a braid of hair worn hanging down in back, or a line of people waiting their turn, or an organized sequence of data, messages, jobs or other such items awaiting action, or the process of arranging people or items in sequence.

This usage of queue predates cue by about 200 years, originating in Middle French.

Kew: a part of the Greater London borough of Richmond-upon-Thames, on the River Thames: famous for Kew Gardens  (the Royal Botanic Gardens), established in 1759.

Que: California slang for barbecue, or the abbreviation for Quebec.

If you say an actor is waiting for his que, you’re saying he ordered barbecue.
If you say that messages are in a kew, they are in London.
If you talk about a pool queue, you’re referring to a line of people waiting to play.

Everything You Ever Wanted to Know About Soap Bubbles

1 thought on “Word Nerd: Listen for Your Queue”