After 20 years as a videogame franchise from EA, Need for Speed has now made the leap to film; the result is pretty much what one would expect: exciting action scenes involving cars doing semi-impossible things, punctuated by earnest scenes of drivers challenging rivals and enjoying their friends. It’s not a deep and thoughtful film, but it isn’t meant to be.

1. What’s it about?
Aaron Paul plays Tobey Marshall, a mechanic and racer who recently inherited his late father’s high-performance auto shop. Marshall is big on the illegal street racing circuit, but he’s behind on his loan and may lose the business. A creepy rival, Dino Brewster (Dominic Cooper), hires him to complete restoration on a very valuable car, a job that will pay about $500,000; later, they get into an argument about their relative driving abilities, resulting in a race (involving the absurdly-expensive Koenigsegg Agera); Marshall’s buddy, Pete (who happens to also be the little brother of Brewster’s girlfriend, who happens to be Marshall’s ex; drama!), wants to join the race, and it happens that Brewster has a third Koenigsegg lying around, so they’re off. As expected, Pete dies in flames, Brewster frames Marshall for the accident and successfully hides his own involvement, and Marshall goes to prison for manslaughter. Two years later, Marshall is out of prison and out for revenge, which he will pursue via a high-stakes road race sponsored by “The Monarch,” a fabulously wealthy and mysterious retired racer (Michael Keaton) who rants and pontificates via an online call-in program dedicated to the wildly irresponsible races he puts on, which gives the producers an excuse to use a lot of video game imagery. Of course, Marshall has to get to the race first, which involves breaking parole and making a 45-hour cross-country drive in another borrowed multi-million dollar car, along with the hot blonde English girl (Imogen Poots) who tags along on behalf of her employer, the car’s owner. The cross-country drive attracts the attention of the police, state troopers, and a collection of thugs seeking the bounty Brewster has offered to anyone who can stop the pair. Cars blow up, crash into each other, and plow through a variety of structures. 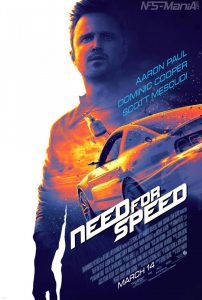 2. Will I like it?
That depends; Need for Speed is something of a Rorschach test. For those who can turn off their brains and enjoy a video game-as-movie, it’s better than most such productions. The action is solid and exciting, the story believable enough and compelling enough to keep us watching, the characters likeable and engaging (or monstrous). For those who aren’t devotees of racing games or racing in general, and who tend to overthink everything, the film is kind of appalling; at its heart, there is a socio-political subtext that embodies the complaints about “the 1%”; for those who can afford multi-million-dollar cars, the law does not apply and driving in excess of 120 MPH through busy city streets leaving destruction in one’s wake is just a routine day of fun. We may need a new movie rating category, “PG-40”, which identifies films nobody over 40 should see.

3. Will my kids like it?
Probably; it’s loud, fast-paced and full of improbable action sequences, with a pretty straightforward love-and-revenge plot that isn’t hard to follow. If your kids are near driving age, you may hate the idea of letting them watch this, though my recently-licensed daughter said that it absolutely did not encourage her to drive faster.

4. It’s rated PG-13; is there anything to be concerned about?
The rating is for “sequences of reckless street racing, disturbing crash scenes, nudity and crude language.” I don’t remember any nudity, so it must be pretty minor if it wasn’t cut. I don’t remember the language being especially crude, so we’re not talking about Tarantino-level F-bomb-dropping. The rating is really for the non-stop wanton destruction of property. There’s very little blood, but surprisingly, some people are actually injured in these car wrecks, and we actually see them recovering in the hospital. A couple of people actually go to prison for their insanely self-indulgent and reckless behavior, so there is an opportunity to talk to your kids about actions and consequences and being held responsible for what one does.

5. Is it worth paying extra for the 3-D?
Not really. Apart from some spectacular close-up slo-mo crashes involving debris flying into your face, and a lot of shaky-cam POV scenes of cars racing, most of the film has a fairly shallow depth-of-field, so you hardly notice the 3D effect for much of the movie.

6. When is the best time for a bathroom break?
Pretty much whenever you want to; there’s not a lot of exposition or character development going on here, and most of the film is cars roaring across the screen, so it’s a safe bet that if you have to pop out for a minute you won’t miss much. Try not to go out around the 1:20 mark during the chase sequence in the desert; you’ll want to see that.

7. How is the acting?
Better than it needs to be. The filmmakers have actually crafted some interesting characters, and the performers bring them to life very well. Aaron Paul never reminds you of Jesse Pinkman, and his crew (Scott Mescudi, Rami Malek, Ramon Rodriguez, Joe Peck, and Harrison Gilbertson) create a believable circle of friends and inject some comedy into the proceedings. In fact, the acting is one of the film’s problems; it’s a lot harder to sit back and enjoy the car crashes if you actually care about the people involved.