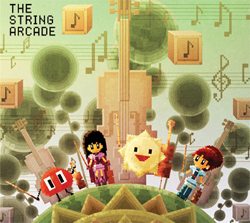 I can’t tell you how many times I’ve had music from Tetris stuck in my head. One group considers that type of earworm to be a good thing—and a thing that may be able to fund a certain after-school program.

The CD began as a Kickstarter project, back in August. Composer Dren McDonald successfully reached his $6,000 goal and has since delivered the finished recording to all of his backers. Now, he is offering it up to others, in an effort to help fund the Alameda Music Project, a tuition-free K-5 after-school program launching this September in Alameda, California.

All of the music was arranged for string quartet by McDonald and Jason Poss, who has worked on the Lord of the Rings film trilogy and World of Warcraft: Wrath of the Lich King. Besides helping to fund the after-school project, McDonald hopes that the CD will actually inspire young musicians to pick up a violin, viola, or cello.

The String Arcade CD features 15 original arrangements, as well as two bonus tracks for CD buyers. Performed by local musicians (with a special appearance by the Boston-based Videri String Quartet), the CD includes familiar tracks from Galaga, Legend of Zelda, Sonic the Hedgehog, Minecraft, and more.

“It’s odd how familiar melodies in surprising circumstances can make you grin. But it’s less strange how to realize that beautifully arranged, spectacularly played music can transcend even its original medium and become something to be savored standalone,” says video game historian  Simon Carless, in the CD’s liner notes. “And, thanks to the String Arcade Players, we get a soundtrack album to remember—one that soars around the history of video games and creates a cohesive whole from spectacularly diverse sources.”

Interested music (and game) lovers can listen to a preview track of Plants Vs. Zombies‘ “Grasswalk.” A full digital version of The String Arcade is available for pre-order via iTunes and BandCamp. The digital and CD versions will drop on February 11, 2014.

All of the proceeds for both the $7.99 digital download and the $9.99 CD will be used to fund the aforementioned Alameda Music Project.

Disney Infinity 3.0: Return of the Hoarder