Today we come to the one word that was the cause of the Word Nerd feature coming into existence in the first place. A friend on Facebook had posted a comment about a comic book story plot point and said “that’s not cannon.” I responded “people who talk about the Marvel cannon should be fired out of one.”

The word is canon.

Canon: a rule, code or law or collection of rules, codes or laws, or a collection of writings regarded as authentic, authoritative, sacred or definitive.

Both words have a variety of alternative meanings; a canon can also be a musical composition, part of a worship service, or a member of a priesthood, while a cannon can be part of a bell, a horse’s bit, or part of a hoofed mammal’s lower leg. 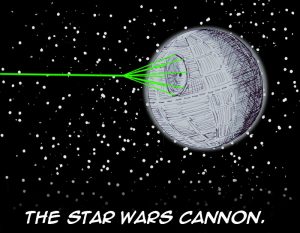 Canon comes from the Latin word for rule. It appears in Medieval English around 1100 as canonic, meaning living under one rule.

Cannon originates around 1400, from the Old Italian cannone, which comes from the Latin word for a reed or tube.

If you talk about firing a canon, you’re probably planning a book-burning or expelling an Anglican priest.

If you talk about the Spider-Man cannon, you’re probably referring to a toy, probably one that shoots water.