Two of today’s words are homophones (or heterographs if you prefer); the third is a common contribution from stupid autocorrect. The fourth is only barely a word.

Threw: the past tense of throw.
Through: to enter on one end and exit on the other or go from beginning to end.
Thorough: to do everything that needs doing, completely and with attention to detail.
Thru: a semi-literate shortened version of through, only permissible at businesses with a drive-up window.

Threw first appears before 1000, from the Middle English throwen, thrawen; it comes from the Old English thr?wan, meaning “to twist, turn”; you can trace it back through the Dutch draaien and German drehen, meaning “to turn, spin, twirl, whirl.” Somehow this comes from to the Latin terere and Greek teírein, which mean “to rub away.”

Thorough is also from before 900, from the Old English thuruh, which is a variant of thurh through. 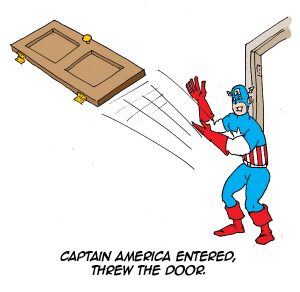 If you say “he through a pumpkin at me,” you’re saying he either spied on you by looking through a jack-o-lantern or he crawled through one.

If you say “we went threw the costume box,” you’re saying you flung the costumes all over the attic.