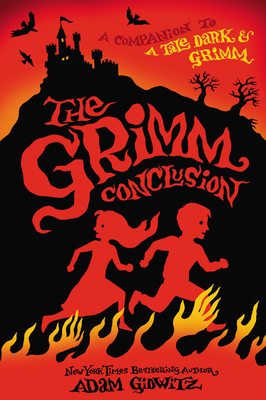 With Halloween fast approaching, boys and ghouls who like their books to pack a gory wallop will be looking for a seasonal treat. And Adam Gidwitz, author of the best-selling A Tale Dark and Grimm (2010) and In a Glass Grimmly (2012), comes through again with the third in his series with Dutton, The Grimm Conclusion, published this month.

Gidwitz knows fairy tales, and he’s mined both the well-known tellings and the lesser-known for his stories, which are great for fearless readers who want to know what “real” fairy tales were like. His amusing and sometimes irritable narrator reminds that “Once upon a time, fairy tales were awesome.” These tales weren’t the watered-down, sugar-coated stuff we’ve come to know. Instead, they were filled with cruelty, heartache, and lots of severed appendages.

While this sounds completely inappropriate for young readers, Gidwitz has confidence they can handle it. His narrator even takes a break in the action to check in periodically with the reader and make sure the little ones are out of the room. With my kids, these stories were an enormous hit for the 10-and-older crowd. My 8-year-old, however, found them scary in a can’t-go-to-sleep-now kind of way.

As Gidwitz did with the previous two books, he sets a boy and a girl out into the harsh, unforgiving world. Where first it was Hansel and Gretel, then Jack and Jill, in The Grimm Conclusion it is Joringel and Jorinda, who Gidwitz says “have perhaps the most harrowing journey of any of my Grimm protagonists.”

Amid the page-turning suspense and shocking ruthlessness (the stepsisters in Cinderella cut off their own heels and toes to make the shoe fit), there is warmth and wisdom. Gidwitz takes his readers on a dark and memorable journey, and once he’s certain he has their full attention, he drives home an important lesson all children should know: the power they possess in telling their own stories. GeekMom reached out to Gidwitz to find out more about his books.

GeekMom: What do you have against children? And where do you get off trying to scare them half to death?

Adam Gidwitz: Oh, please. They love it. You should see them at my events, screaming and clapping and crying for their mommies and then crying for more bloody stories. Not only do they love it, they need it. Children know what they need. When they’re toddlers, they demand the same book over and over again – until suddenly, they don’t want it any more. Their brains have decided that they’ve gotten what they need from the book, and now they can cast it away. Likewise, children aged 8 to 13 crave the dark, the scary. They want to test themselves against it, to explore it in a safe way. More than that, these dark fairy tales address fears that every child has, desires that grip all people, no matter their age. These tales let kids work out feelings that are deeper than words. I’ve written more on this, if you GeekMoms are really geeks: check out my essay Tears Into Blood.

GM: Now that we’ve established that you have a thing against children, why are you trying to destroy their childhood? Everybody knows that fairy tales involve fancy ball gowns and friendly bunnies. What’s up with yours?

AG: What’s up with my fairy tales? Or my childhood? My childhood was just as wonderful as you could hope for. But everyone, no matter how rosy their childhood, has feelings that are complicated that could use some working out through fairy tales. As for my fairy tales, these are the real ones, my friend. Cinderella’s stepsisters cut off their toes and heels to get the shoe to fit in Cinderella. Snow White’s mother tries to boil her daughter’s lungs and liver in salt and eat them. What’s up with your fairy tales?

GM: When you began A Tale Dark and Grimm, did you envision a three-book series? What has it been like to take readers on this journey?

AG: This was a surprisingly attitude-less question. Backing off a bit, are we? Even while writing the first book, I knew there were so many incredible Grimm fairy tales that I wasn’t getting to, and that I wanted to use – plus some from Andersen and the English tradition, too. Also, the first book deals with issues of parents and children. I knew there were other issues I wanted to tackle, too. Peers and image, in In a Glass Grimmly, and the power of story-telling, in The Grimm Conclusion.

GM: Your stories are clearly well-researched, and your knowledge of traditional folk and fairy tales runs deep. Can you talk about the research for these projects and your creative process?

AG: The first thing I do is read and re-read my big old volume of Grimm’s fairy tales. I primarily rely on Ralph Manheim’s translation, though I cross-reference with editions collected by Jack Zipes and Maria Tatar. I choose my favorite tales, and I list them. Then I start to look at that list and think of how these stories might fit together. I start to re-imagine the stories, and then -and this is the most crucial part, I start to retell them. Each chapter of each of my books is told aloud again and again – often to students, sometimes to my resentful wife, sometimes to inebriated friends who have lost the power to stop me. Once I’ve told a tale enough that I feel confident in it, I write it down, weaving it together with whatever stories I’ve written down before it, changing it as I see fit. As I write, I’m thinking both of the psychological and theoretical underpinnings of the stories, while at the same time imagining my former students – fifth graders, mostly – sitting before me, listening to me tell the tale.

GM: With The Grimm Conclusion, children everywhere are going to be heard using the term “metafiction.” Why did you bring yourself, the author as narrator, into the story?

AG: Don’t give it away!!! I refuse to answer this question.

GM: My kids love your books, but they are a bit squeamish when it comes to gore. What kind of child were you? Could your younger self have handled the blood in your Grimm books?

AG: I think my books would have scared the bejeezus out of me. I don’t even like reading scary stories now, except for fairy tales. You see, it’s much more fun to scare other people.

GM: With Halloween right around the corner, The Grimm Conclusion makes a great read-aloud to get students in just the right creepy spirit. As a former teacher, can you talk about reading aloud to a classroom and the power of students sharing the experience together vs. reading the book independently?

AG: I can. Better than that, I can share a story with you. This story might also appear in the pages of one of my books:

In the beginning, I was not a very good teacher. You see, to be a teacher, the first thing you have to do, before you can teach the kids anything, is get the kids to shut their mouths for one second. I was not very good at doing that. In fact, I was miserable at it. I had this one boy in my class – let’s call him Jeff. Jeff used to like to play in the block corner. But unlike the other kids in the block corner, who were building castles and towers and cities, Jeff used to like to take the longest, heaviest blocks he could find and smack other kids on the head with them. I would chase Jeff around the room, begging him not to do this, but to no avail. I had another boy in my class, named Matt. While I was chasing Jeff around, Matt used to like to jump up on a table and dance. On the table. I would scream for him to get down, when I would notice a boy named Ryan. Ryan would be over in the arts and crafts. But unlike the other kids in the arts and crafts, who would be painting or making collages, Ryan would be gluing cotton balls to his face. And singing Christmas carols. In September.

Well, one day, I decided I couldn’t take it anymore. I sat down in the middle of the rug, as Jeff smacked kids with his block, Matt danced on the table, and Ryan glued cotton balls to his face. And four kids came up and sat beside me on the rug. Because if you’ve ever taught, you know that in every classroom there are always three or four nice kids, who will help you out, no matter how bad the rest of the kids are. So I thought, “You know what, forget these other kids. I’m just going to tell these nice ones a story.” So I said four simple words: “Once upon a time.” And as soon as I did, the strangest thing happened. Jeff, over in the block corner, turns and looks at me – his block dangling inches from an unsuspecting child’s head. Matt, up on the table, stopped dancing – in the middle of his favorite Michael Jackson routine. And Ryan – well, Ryan kept gluing things to his face.

As I told the story, Jeff, very slowly, dropped his block and came over to the rug. And Matt got down on the edge of the table, and listened. And Ryan – well, Ryan kept gluing things to his face. And by the end of the story I realized that I had one way of getting kids to listen to me – and that was telling stories. So I started doing that, all the time, and it turned out to be a pretty good class. Jeff turned out to be a brilliant student. Matt was a wonderful kid. And Ryan – well, Ryan got a skin condition. ‘Cause you can’t save them all.

GM: The Grimm Conclusion is ultimately a book about empowerment for children. What are you hoping to accomplish with your writing and say to young readers?

AG: All of my books, I think, are about the empowerment of children. Children are little balls of potential and optimism. That’s why I don’t write books with sad endings. Because no matter how hard things will be for children as they grow up, they will, in almost every case, grow up. They will gain in ability, in confidence, in power. That is the story of childhood. And the happiest, healthiest adults, in my estimation, are those that believe the process of growing-up never ends. The happiest adults remain children, in that we believe that things will get better, and that we can make them so, if only we believe. I write books so children will believe; and so that, perhaps, adults will, too. 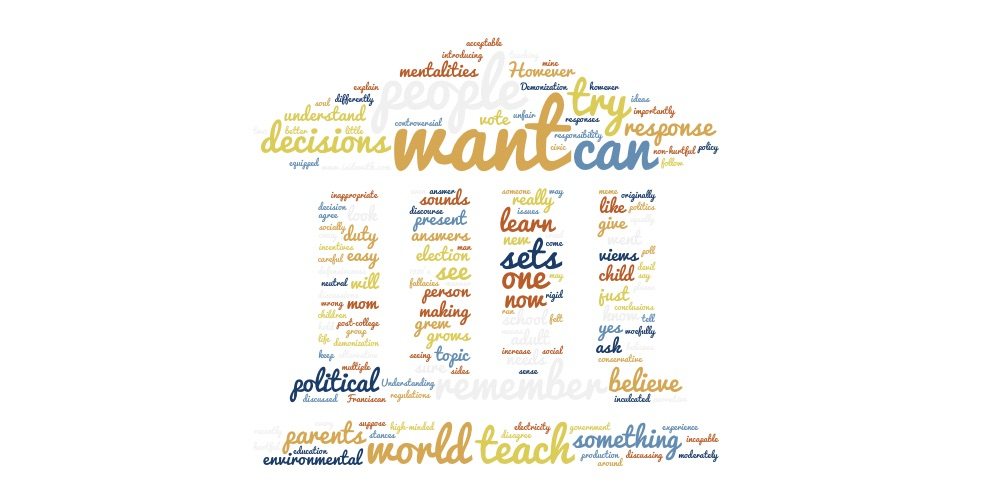 Politics and Parenting: A Civic Duty