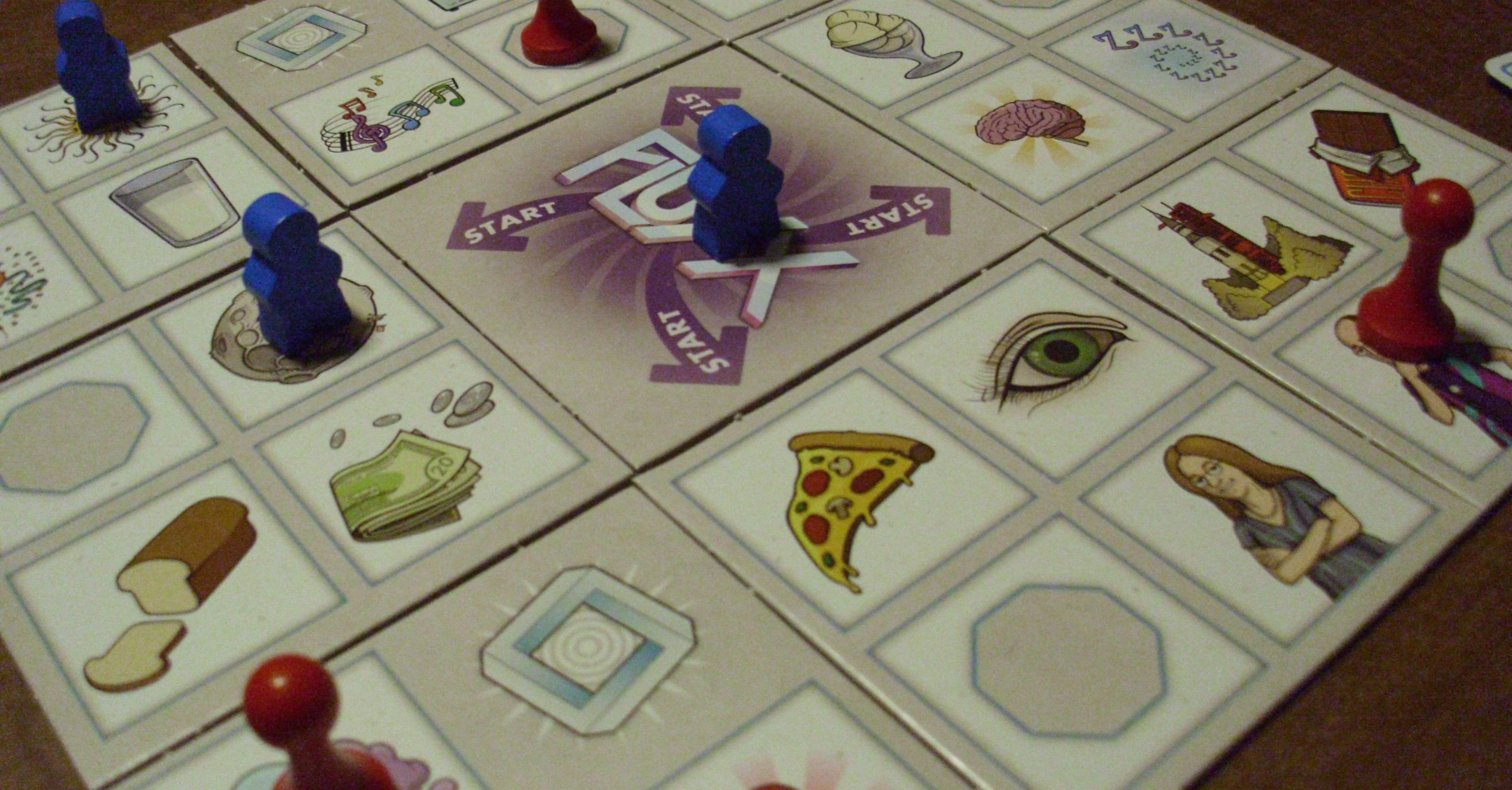 in our house since discovering it over a decade ago. We have played all of its iterations: Zombie

, and we have enjoyed every single one. To say that there was excitement in our family upon learning that Fluxx had become a board game

would be an understatement. If you have never played Fluxx: The Card Game before, I suggest you start there. It’s a great game. For those who have already experienced the awesome that is Fluxx, get ready for the rules to be changed yet again.

The basic premise of Fluxx, the notion that has made it so popular, is that the rules are not static. You start with a set of basic rules–pick a card, use a card–and from there the cards that you lay down in the game play allow you to alter the aim of the game, and the rules by which you play.

Fluxx: The Board Game

has a familiar feel to it. The same rules begin the game, only this time you have the chance to change a rule pre-game, just because. The Goal cards, New Rule cards, and Action cards all look the same, but gone are the Keepers that we have hoarded in the past. Instead you use a game piece to mark squares on the board. These squares do have a card counterpart. The Leaper cards each represent squares on the board, and allow you to leap your piece to that square. While in the card game much time was spent trying to match your Keepers to a goal card, in Fluxx: The Board Game

, you are trying to accumulate Goal cards that match the positioning of your game pieces.

The other major change is that instead of tracking the rule changes with played cards, you track on a peg board. This will tell you how many cards to draw and play, what the hand limit is, and even how many moves you get. It also tells you of the new elements of the board game, the ability to use certain cards, and to jump from one side of the game to the other. The peg board does feel like it was only used to get away from the notion of using cards to change the rules, to take it another step closer to a board game. At the same time, it was nice to have one place to refer to instead of reading the cards for every turn. The peg board is made of cardboard, and not quite of the high quality I have come to expect from Looney Labs.

The card game can last from thirty seconds to an hour, with 45 minutes as our longest round. With Fluxx: The Board Game

, you gain a little more ability to plan ahead which puts the game play in the 15-30 minute bracket. Almost every round we played lasted around 15 minutes, though I continued to play more with the card game rules in mind, and I suspect this hampered my ability to win, therefore shortening the game.

Looney Labs has done well in reaching out to the classics of board gaming to create this new game. The portals that you use to jump from one side of the board to another are very reminiscent of Clue

, while the ability to bump a player from one space to another, or even to send them back to start, had me flashing back to the Sorry

games of my childhood. These are both aspects of the game that I feel will endear it to my friend’s sixth grader, who loves both of these classic games.

While I still prefer the original version of Fluxx, this is a decent game to put into the rotation on family night. It feels as though it would be easier for younger/tired minds to track what was going on! It has a more finite play space, so you don’t need up to an acre of table to lay down new rules. At the end of the day, when the rules change this often, it keeps everyone on their toes and provides a giggle along the way.

To find out which Fluxx is the best fit for your family, you can check out previous reviews on GeekMom:

Lisa’s review of Monster Fluxx for something a little spooky.
Sophie takes a look at the Fluxx app, if you are more of a point and slide gamer.
My own take on Oz, Star, and Pirate.

Though, every version has its own merits, so I would have to advise having one in the house for every occasion!

GeekMom received a copy of this game for review purposes.

Take a Glimpse into the Anthropology of Lego

Star Trek: The Next Generation Remastered And Finally Arriving Jan. 2012

Between the Bookends: July 2015