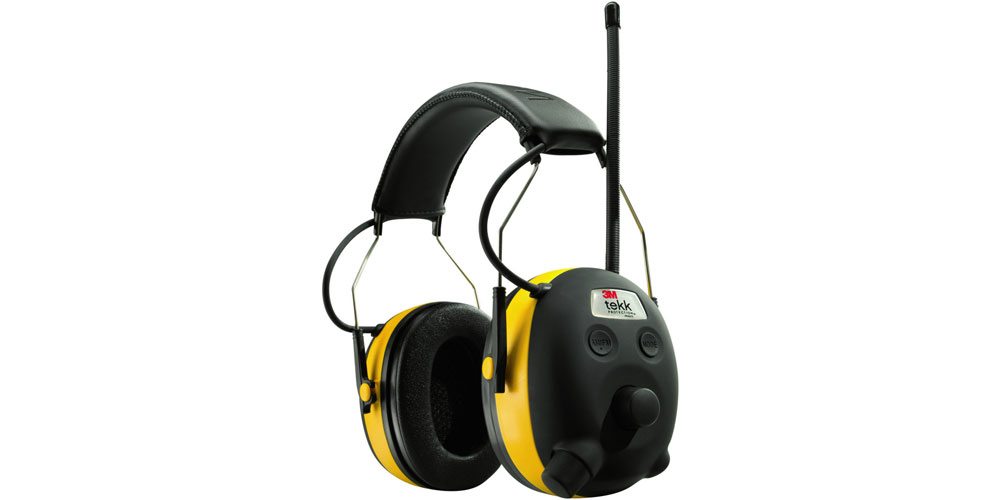 My youth was punctuated by too many loud concerts in small venues and a nearly-constant companion in a Sony Walkman, leaving the middle-aged me with some hearing loss and tinnitus. Those aren’t choices I would make now and, resultantly, I’m protective to a fault these days. I wear ear plugs to concerts and anywhere else that noise is an issue. Plus, any time I fire up a power tool, I always reach for ear muffs first.

So when 3M asked me if I wanted to try out their Tekk Protection WorkTunes Hearing Protectors, I was very interested. The big, yellow muffs fit snugly around my ears and offered an immediate noise reduction rating of 24 decibels, on par with most other foam-type ear plugs and over the ear protectors.

However, the 3M WorkTunes, as the name suggests, go a step further, allowing you to listen to music while keeping out loud noise. Pop in two AA batteries and the hearing protectors will also play music or talk from FM and AM stations. The headphones will auto-program the stations it finds or you can store your favorites using the 25 AM and 25 FM presets. Tuning and volume control are easy, as the two knobs to perform these primary functions are big and easily accessible. Two secondary buttons allow the user to give music one of three bass boost settings (1, 2, and off) and you can skip from station to station using the recall function.

Before you say “Far out, dude, my old man had a pair of AM/FM headphones like this back in 1971,” you should know the WorkTunes also have an audio jack that allows you to plug your phone or MP3 player into the hearing protector. Plugging into the audio jack automatically interrupts radio playback and removing the audio jack will jump right back to radio play — a very nice feature. It works very well, but I found that the volume control on the headphones doesn’t work when the headset is plugged into a phone, MP3 player, or laptop. You have to rely on the volume control of those devices.

My one complaint is that it would be nice to have a power light to show if the headphones are powered. When I’m working in my shop, I tend to take hearing protection on and off as needed and a visual indicator of the hearing protector’s status would be welcomed. But, after two projects and some yard work with the WorkTunes on, I really grew to like them a lot. While I was nervous I would fall into the same problem as my Walkman all those years ago, I found I didn’t really need to listen to music very loud because the WorkTunes did a good job of blocking out surrounding noise and didn’t allow overly loud sounds anyway.

The hearing protectors carry a retail price of $59.95, which is in the sweet spot of similar hearing protectors, if not cheaper than others in the space. The Tekk Protection WorkTunes Hearing Protectors are available now from Lowe’s, Menards, Walmart, and Northern Tool, as well as other retailers.