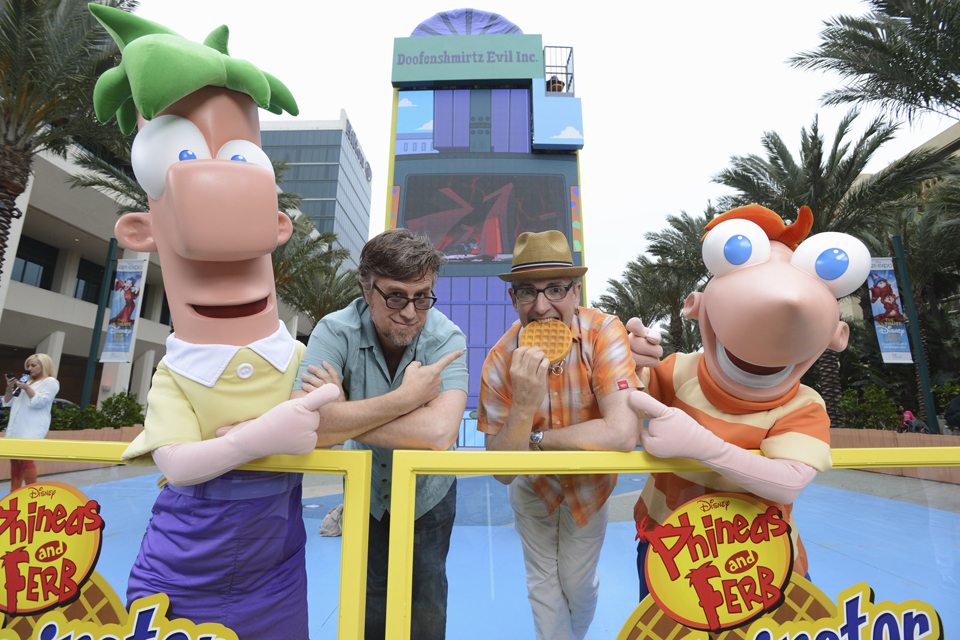 It hasn’t quite been 104 days of summer vacation, but it has been four years for Disney’s hit series, Phineas and Ferb. In other words, it’s time for a crossover show!

These days, the House of Mouse has a slew of super-cool guest stars to choose from. However, the network’s dynamic duo has decided to invite Marvel to pay a little visit to the Tri-State area. Can you blame them? They’ve got all of the best superheroes!

In the one-hour special, “Phineas and Ferb: Mission Marvel,” an encounter with Dr. Doofenshmirtz’s power-draining “inator” leaves superheroes Spider-Man, the Hulk, Iron Man and Thor not feeling all that super. It sounds like Phineas and Ferb know what they’re going to do today.

I got the chance to chat with creators Dan Povenmire and Jeff “Swampy” Marsh about the special, their superpowers of choice, and what it’s like to use waffles as a weapon.

GeekMom [Rachel]: I know this is the show’s fourth season. Is this the first crossover episode?

Dan: I believe this is.

Swampy: Indeed it is; it’s the first one and it’s also the first Disney Channel show that’s done a Marvel crossover since the merger.

GeekMom: So why are you doing a crossover episode? Why now?

Dan: Because they’re letting us. They said, ok — sure.

GeekMom: I think you’re letting them.

Dan: Actually, it was something that we didn’t even think to ask, because we didn’t think we’d be able to do it. Then Disney asked us if we’d be willing to do it and we were like, “Um… yesss. We would love to do that.”

Swampy: The Marvel superheroes? We’ve been dying to play with those toys!

Dan: We have been playing with those guys in our brains for years, but we just never had any outlet for it.

GeekMom: The episode is funny — like, really funny. Besides the voices, how much input did the Marvel people have in this episode?

Dan: We wrote it and pitched it to them at several different points in the process and they sort of kept us on track of what you can and can’t do in the Marvel universe. That whole conversation [in the episode] between Iron Man and Thor about how you hold the hammer; it came from us originally having Iron Man pick up the hammer and they said, “Actually, you can’t do that because that’s about worthiness. It’s not about power.” We had a whole conversation with them and we were like:

“He can fly, but only with the hammer.”

That’s almost word for word our conversation with the Marvel execs. We put it in and they thought it was hilarious.

GeekMom: I remember a lot of crossover episodes as a kid, like the Harlem Globetrotters meeting Scooby Doo and even the Laff-A-Lympics. Some collaborations definitely work better than others. Is it harder to write for characters that are not your own creation?

Dan: Oh yeah, even though we’re all familiar with them. Like, I was never so far into Thor that I understood all of the workings there. As much as I collected Spider-Man comics, it’s suddenly a new muscle that you have to sort of work with to try to figure out how to write in this character’s voice and still keep it funny and still keep the characters true to who they are.

Swampy: You have to think differently and you have to solve problems differently. We have our toolbox full of tools that help us solve issues and things with our characters.

Dan: He means that literally. We a plot screwdriver and a gag wrench. [Group laughs.]

Swampy: It’s weird, you have a lot more moments where you’re staring off blankly into space for two or three minutes going, “uuuhhh.”

Dan: Swampy already has a lot of those, as you can imagine.

GeekMom: [Laughs] So, how did Stan Lee get involved?

Dan: We just said that we had to have Stan do a cameo, because he’s done a cameo in all of the Marvel movies. It’s something that, as comic book fans, when you go to the Marvel movies now, you look for Stan’s cameo. You’re waiting for it and when it comes on, there’s always like 10 percent of the audience that cheers. And everybody looks at them and says, “Why are they cheering for that old man?”

Swampy: Doing a Marvel thing without Stan, I think, is a crime in many states.

Dan: It’s not a capital crime. We only would have had a little bit of jail time.

Dan: He’s fun and he was wearing the same outfit that Swampy was when he came in. Swampy likes to brag about it, but I always say, he is like 80 years old. [Stan Lee is actually 90!]

Swampy: Yeah, but he’s Stan Lee. I’ve got a picture of me dressed the same as Stan.

GeekMom: What was the outfit?

GeekMom: [Laughs] You mentioned comic books, you guys have been reading since you were kids?

Dan: I had a whole great collection of Spider-Man stuff when I was 10 or something that my mom threw away once when she was cleaning my room. She was like, “Well, he’s read all of this.”

Swampy: He’s never forgiven her. She no longer gets Christmas cards from Dan just for that.

GeekMom: So are you still reading today? Did you feel like you needed to study up for this episode?

Dan: Well, no. I’m fairly familiar with all that stuff, but I do still read. I’ve been collecting — well, not collecting, but I buy the “collections of.” I don’t get them every month, but when they put together the bound collections. There’s a whole new series called Ultimate Spider-Man that has taken Spider-Man back to the very beginning and sort of re-told the whole arc and I’ve been getting those as they come out. I think it’s really nicely written and the art is fantastic.

Swampy: I’m going through the joy now of my son, who’s 12 and discovering comics. Thanks to giving all of my comics to my little brother at one point in my life, I now have all of those old comics coming back into my life, because every time my son visits him, he gives him some of my old comics. So this has been really cool: I’m sitting here, reading my old comics with my son. It’s been great.

GeekMom: So, you’re both familiar with all of the various superheroes. If you could swipe someone’s superpowers, who would it be and why?

Dan: I think I’d want to fly. I am ambivalent about carrying around a large, heavy hammer during that flight.

Swampy: Just the possibility, though. I don’t know, I think I like just the fact that Tony Stark is just incredibly smart and he can invent ways to do lots of things. I found that I actually have a superpower, it’s just a really, really stupid one.

GeekMom: And that’s what exactly?

GeekMom: I wonder if you could somehow manipulate that into a Mr. Freeze situation.

Swampy: But then I’d have to eat him. [Laughs.]

Dan: It would take some doing. You probably couldn’t do it in one sitting. [Group laughs.]

GeekMom: I just have one more question and I hope I’m not giving away anything in the episode by asking this… but what is it like to be pelted by waffles?

Swampy: I certainly wouldn’t mind giving it a try.

Dan: It gets sticky after a while. [In Doofenshmirtz’s voice] What doesn’t kill you, makes you stickier. That’s what Doofenshmirtz would say. 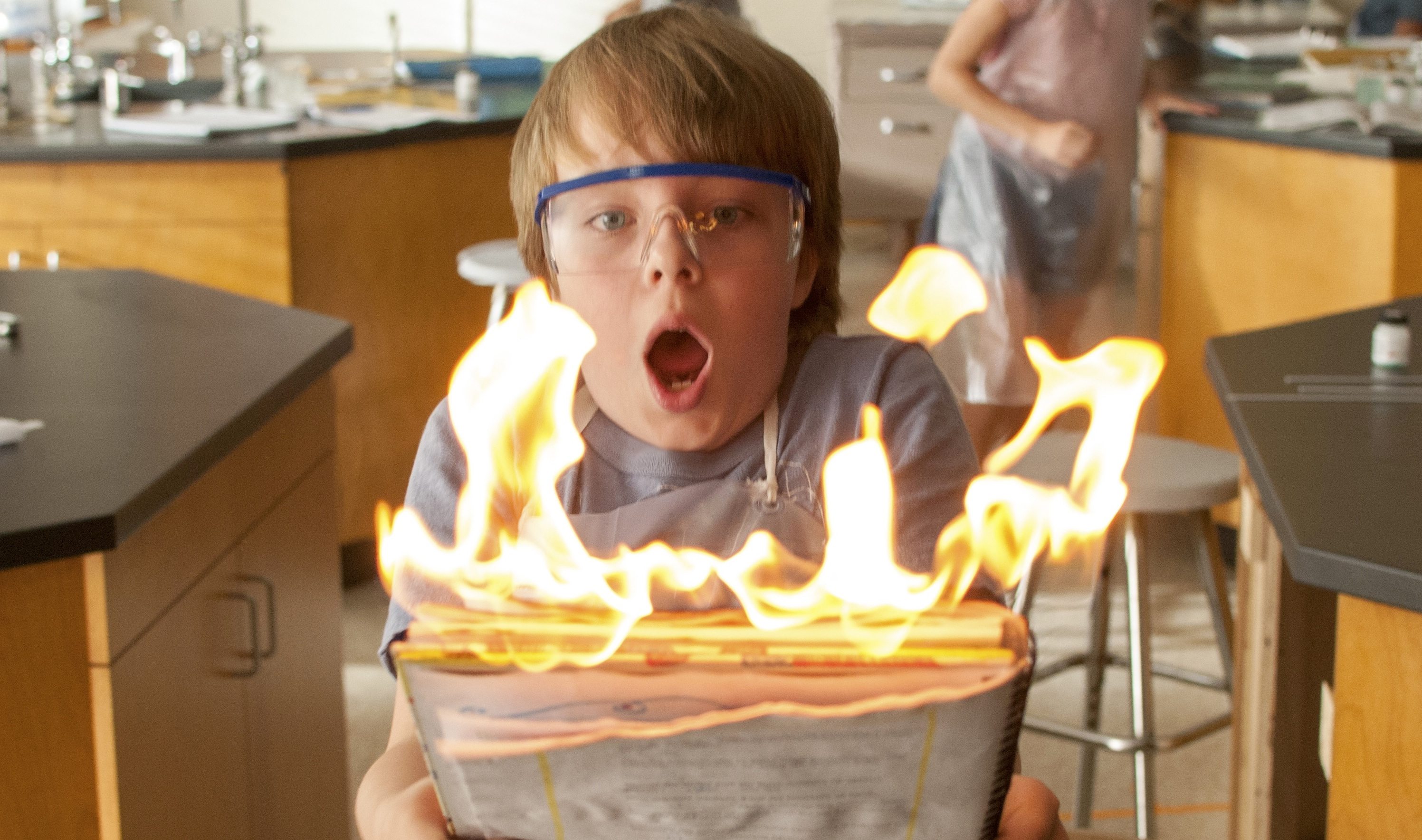