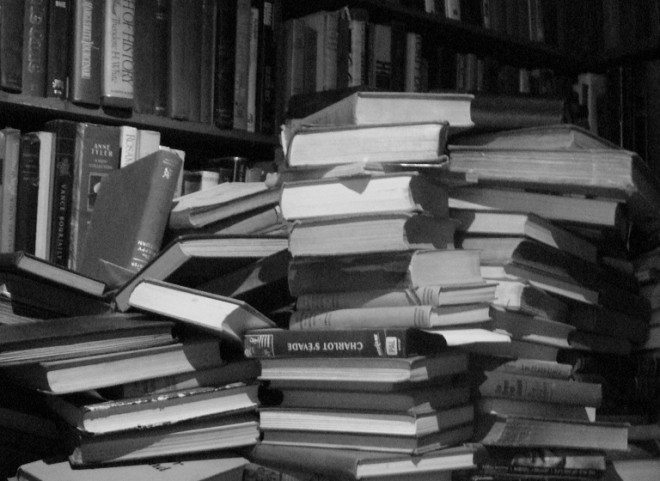 This month, the GeekMoms are reading about zombies, Shakespeare, art, gardening, and peculiar children. What’s on your bookshelf?

Rebecca (along with her family) is currently enjoying The Impossible Museum: The Best Art You’ll Never See

by Celine Delavaux. It’s a great book to flip through and wonder about. The sections are “disappeared,” “transformed,” “destroyed,” “hidden,” and “stolen.” The “destroyed” chapter is the hardest to look at, since most of these amazing pieces of art were ruined on purpose through war, like the Buddhas of Bamiyan. The “hidden” chapter is so interesting; it showcases works that are hidden for their protection (like the Cave Paintings at Lascaux) and works that private collectors just keep to themselves. Rebecca highly recommends it!

Do you remember reading those Choose Your Own Adventure books as a kid? Cindy White does, and she is having a blast working her way through all the different paths in To Be Or Not To Be, a new novel by Ryan North written in the Choose Your Own Adventure style. The book gained notoriety after it became the most funded publishing project in Kickstarter history (North was seeking $20,000 and got more than half a million) and Cindy is happy to report that it’s just as awesome as advertised. As the title implies, the story is based on Shakespeare’s Hamlet, and would be a great introduction to the Bard for teen or tween readers. It’s written in modern, irreverent language and lets you “play” as Hamlet, following the original play, or you can branch out into new territory as Ophelia, or even Hamlet Sr. There are also fun illustrations by notable artists from animation and web comics. But probably the best thing about it is that it’s never the same book twice.

Lisa is likely the last person to ever want to read, much less thoroughly enjoy, a paranormal romance, but she likes a good zombie story. Warm Bodies by Issac Marion, although dark, somber, and at times gag-inducing, actually melted her icy heart. When a young (or maybe not so young; he really isn’t so sure) undead man encounters the girlfriend of a man he just killed, his longing to become a feeling, living being is slowly rekindled. Those who enjoyed the movie version should be warned: This book isn’t the quirky “zom-rom-com” of its film companion. R, however, is much more philosophical and “alive” inside. Plus, the zombie culture is much more organized. There are zombie-versions of schools, marriages, church, hierarchies, and even sadly-lacking attempts at sexual relations between the undead. It’s the evolving relationship between R and Julie, and R’s internal battle with himself that helps Marion’s slim novel maintain its status as a page-turner throughout.

Fran is reading 17 & Gone by Nova Ren Suma, after hearing the author read from the book last week. She says, “Nova’s voice sweeps you up and carries you along the lives of her characters like a river. The reading was so amazing, and I hadn’t read this one of hers yet, so I snapped it up. I’m loving it.” She is also re-reading The Price of the Stars, by Debra Doyle and James D. Macdonald. She loves space opera and this one, recently re-issued as an ebook, is a longtime friend. Fierce female characters, things going pear-shaped when you least expect them. Oh yes. She’s also finishing up her nonfiction read from last month, Margalit Fox’s The Riddle of the Labyrinth: The Quest to Crack an Ancient Code, and confesses to crying in the bathtub at one point. Over nonfiction.

Laura has been reading enticingly magical novels lately and can heartily recommend three. Neil Gaiman’s Ocean at the End of the Lane is told by a seven-year-old boy whose childhood is changed by his neighbor’s supernatural secret. It’s a poignant tale of true friendship and discovery. Wisp of a Thing by Alex Bledsoe takes us along with a young musician as he searches for a legendary song that might heal his grief. The source, he’s told, lies in a mountainous area among a dark-haired people called the Tufa. Their hidden knowledge is much more than a song. For a real feast, Laura suggests Patrick Rothfuss’ 672 page book, The Name of the Wind. It’s the first part of an extraordinary new trilogy, taking the reader deep into a wizard’s mind. Reviewers are calling it “profound,” “riveting,” and “an unrivaled masterpiece.”

Kris picked up Miss Peregrine’s Home for Peculiar Children by Ransom Riggs, finished it quickly, and passed it on to her son. Well-written and captivating, the story was a bit creepier than she expected—actually, it was nothing like she expected—but she and her son both enjoyed it. The photos interspersed with the story are from several collections and include some seriously quirky, slightly disturbing shots. The question: Which came first, the story or the images? Kris also started reading The Resilient Gardener: Food Production and Self-Reliance in Uncertain Times. The title may sound a bit apocalyptic, but this is by far one of the best, easiest to read books about growing food that she’s picked up. The author really delves into the details, explaining why one method works better than another, and walks readers through the processes that have worked successfully in her own garden for years.

MOOV Street Kit: What a Legacy Toy Looks Like