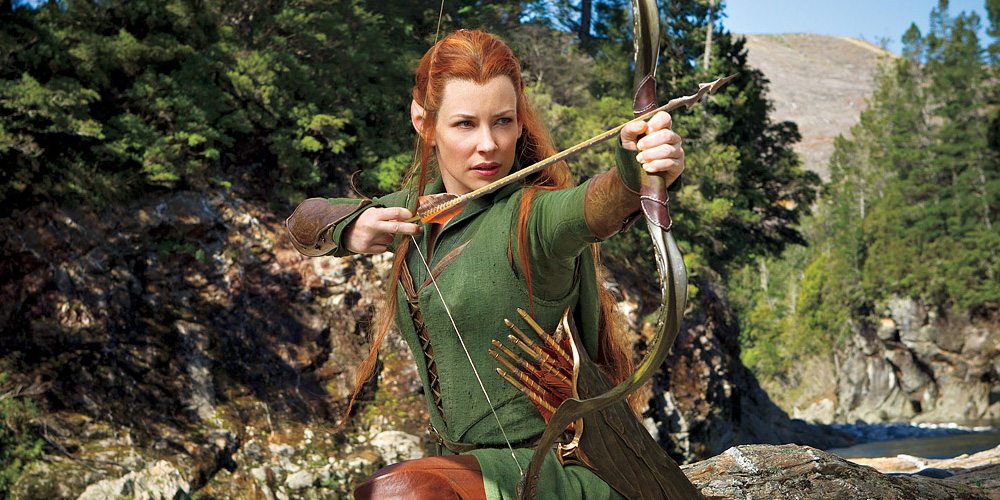 Ever since I wrote those articles about the archery in Brave, The Hunger Games and Avengers (sorry, I won’t link to them on the old site and haven’t copied them to the new one yet; I’m sure your Google-Fu is sufficient to find them), I get random email, Twitter and Facebook messages from people pointing out archery in other movies, TV shows, comics, cartoons and videogames and asking what I think (since you asked, the archery in Assassin’s Creed, the new Tomb Raider game, and the animated Epic all display an impressive lack of any attempt at research), and the latest to cross my screen is a note inquiring about the new elf character played by Evangeline Lilly in the second installment of the Hobbit epic trilogy. (I hope that when the films are all done, somebody will create a special “Contracted Edition” that removes everything that’s not in the book; it will most likely clock in at about 105 minutes and be a fantastic movie. But I digress.)

So, on the basis of one publicity photo and about two seconds of video in the trailer (watch for it at about the 45-second mark), here’s what I think: 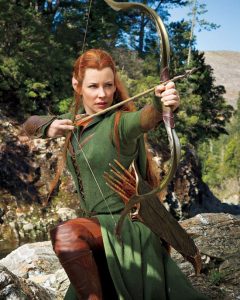 The only thing I see that bothers me is that her quiver is on the wrong side; it should be on the side away from the bow so as to avoid accidentally getting arrows tangled in the bow-string. Aside from that, everything I can see here has more to do with an exotic form of archery rather than the typical English longbow form as demonstrated (mostly adequately) by Legolas.

Tauriel is using a bow that looks a lot like the ones used by horseback archers in Mongolia, Hungary and elsewhere; it’s a deep reflex-deflex bow with very thick limbs, and such bows are usually shot with the arrow on the outside of the bow as Tauriel is doing here. The reason is that if the arrow were on the other side of the bow (the traditional English method) it would fall off the bow whenever the archer tried to shoot to the left from horseback; with the arrow on the outside, the wind pushes the arrow against the bow and keeps the shot in line.

It’s a little weird that she’s drawing the bow with only two fingers, given how heavy these bows usually are, but that’s a quibble. Normally horseman-archers would either use all four fingers on the string or use a thumb-ring to draw and release.

If you go back and look at that short snippet of the trailer showing her shooting on the run, you may think it looks a bit familiar. When I saw it, I immediately thought of this:

You may notice that Iza Privezenceva, the archer in this video, uses a back-hand release that’s common among eastern archers of many countries; it’s the same release used by the blue guys in Avatar. This technique favors speed over accuracy; when you have a couple of hundred guys on horseback raining arrows on the enemy like this, it doesn’t really matter where they’re going. The English longbow style that we know today developed after the invention of guns, when archery transitioned from weapon of war to recreational activity, and accuracy became the goal. It makes sense that a warrior-elf like Tauriel, especially one from outside Elrond’s rarified neighborhood, would favor the more pragmatic form.

All told, I give Tauriel a B+ in archery. Move the quiver to the right hip and it would go to an A.

8 thoughts on “The Hobbit: The Desolation of Smaug – Tauriel the Elven Archer”