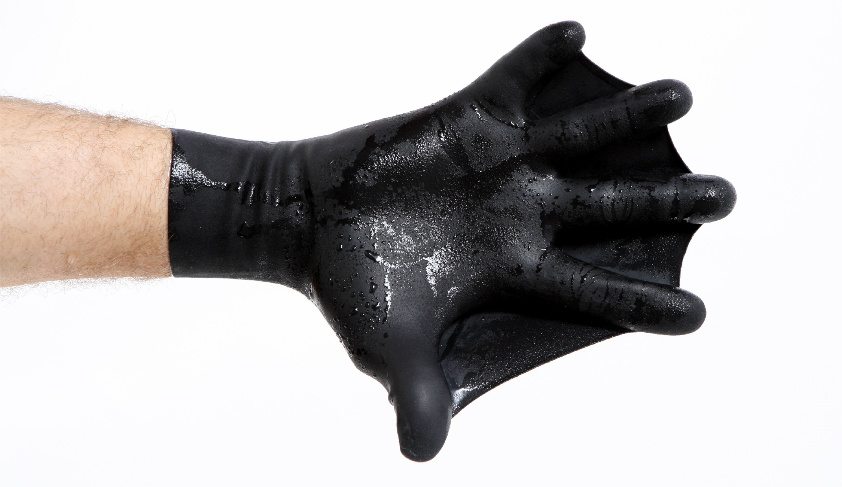 It hardly seems fair. Plenty of creatures including ducks, frogs, turtles, beavers, and kangaroos have webbed feet. The webbing enables them to to force more water behind them with each stroke so they can swim faster. And plenty of sci fi creatures have webbing between their digits as well. Far more awesome than claws.

The gloves come regular or thermal, tan or black, in 12 sizes, with a contoured shape allowing hands to assume a natural resting position.  They’re made from natural latex rubber for flexibility, with a cotton flocked surface for better grip. They’re seamless, with no adhesives used, so the bonding is permanent. And these gloves have a backstory. GeekMom interviewed co-owner Colleen Wallace to find out more.

GeekMom: Is the name you use, “Black Lagoon products,” chosen because of the old monster movie? Can you elaborate a bit about the name?
Colleen Wallace: Yes, we did in fact choose the name Black Lagoon because of the movie but mostly because we thought it was humorous. Most people when they see the Darkfin gloves automatically say, “Cool, reminds me of the Creature from The Black Lagoon.”

GM: Can you tell us what inspired the company’s founders and how they came up with the product itself?
CW: The inspiration for these gloves actually came about in the mid 80’s. First, I want to mention that is a family business; my dad and I are co-owners of the company. In the mid 80’s we were living in Santee, California and my dad got involved—like many Californians—with surfing, bodyboarding, snorkeling, and scuba diving.  That’s where his inspiration came about. At that time no webbed glove had ever been introduced to the market. So he took to the process of trying to figure out how to make the gloves and after a few years he had a business up and running and was producing and selling the gloves. They were called T.F.L power gloves. As young children, me and my two sisters spent countless hours in the shop helping with little tasks like packaging and labeling.

Fast forward a few years.  He got cancer at age 33 and was forced to shut down. He recovered from cancer but since we had moved to Indiana (our hometown) after the medical bills came in he had get capital to start the business back up. In 2005 my dad and I partnered in a different business after we relocated to Knoxville, TN. In 2008 he approached me about bringing back the webbed gloves because he had an ever better vision and design for the gloves. Thus became Darkfin!

GM: Any details you can provide about how Darkfin gloves enhance performance?
CW: As far as enhancing performance goes, Darkfin gloves are amazing!  This time around we put the webbing on the back of the glove instead of the front like we did in the past. This increased the surface area tremendously thus increasing the paddle power. In the past we also used flat 2-D aluminum molds. Now we have 3-D ceramic molds, so the fit is extremely comfortable. One of best features of the gloves is the grip! There are a few other webbed gloves on the market that came out right after they saw our gloves in the 80’s. However, most use neoprene or silicone to make their gloves. The disadvantage to that is neither can boast any grip. The silicone ones are extremely slippery.  We use a cotton flocking on the surface of the latex to provide that amazing grip. Lastly, the gloves are so flexible that you you can do most anything while wearing them. I recently took a kayaking trip and not only did I never touch my paddle and just used my hands but I was able to operate my camera with ease. Scuba Divers report they can handle all their equipment without having to take the gloves off.

GM: This is off the wall, but what non-human is the hand most like in a Darkfin glove?
CW: I would have to say it would be a platypus!

GM: What are some of the oddest uses you’ve heard for the gloves?
CW: Apparently a few bloggers on fetish websites reported how they would love to have these on their night stand! I am not sure what for, but I guess your imagination could go wild on that one!
Other than that, I have had a few people buy them for a costume. One girl painted hers and did herself up as mermaid for a play she was involved in.  Another guy in Vegas used them for a live show he does in a tank with marine animals.

GeekMom: Space Junk On the Rise: Cleaning Up Our Act