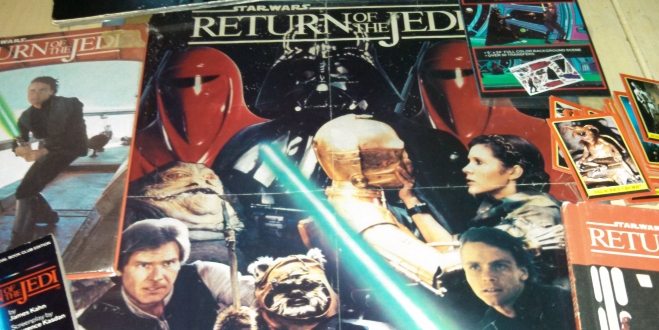 Editor’s note: This is part two of an edited version of the chapter “What You Take With You,” from John’s book Collect All 21! Memoirs of a Star Wars Geek. Part one appeared on GeekDad yesterday in anticipation of the 30th anniversary of the release of Star War Episode VI: Return of the Jedi, which hit theaters May 25, 1983. As this post opens, 12-year-old John and his family are at Mellett Mall, three hours before showtime on opening night.

No advance ticket sales here, this was good old-fashioned get in line, tickets go on sale maybe an hour, tops, before a showing, wait your turn and have a friend hold your spot if you have to pee.

Mom, Dad, Nick, Adam, Mike and I parked ourselves at the end. (People piled in behind us pretty steadily, so we weren’t at the end long.) Mike and I ran up to the front of the line to look at the movie posters and the accompanying photos in their lit-up glass frame, pointing and wondering and yammering about how cool this was and how great it was to be there.

We ate dinner in two shifts: Clutching some money from Mom and Dad, we ran down to the hot dog shop — it might have been called Carousel — and the Orange Julius next door. (That was, I’m pretty sure, all the food choices Mellett Mall had to offer. Food courts wouldn’t reach Canton for another few years.) It felt neat, being 12 years old and kind of on our own. Sure, my family was right down the mall, but these were pre-cell phone days, and there was a sort of freedom in the air as we ordered our own food, found a place to sit, talking and joking while we ate.

Then we held the spot in line when Mom and Dad took my little brothers for dinner.

It’s funny how much of the next few hours I don’t remember from that May evening in 1983.

I don’t remember the line eventually creeping forward, or the moment our tickets came spitting up through the little slot in the counter, or finding our seats, or the lights going down, or the previews.

I don’t remember the tense anticipation brought on by the 20th Century Fox fanfare or the chills on the back of my neck at the blast of sound when the Star Wars logo slammed onto the screen.

What I really remember is a feeling.

I’ve never seen a movie in an atmosphere like that again. Packed houses on opening nights with hardcore fans, sure, but never again like this one.

All of us were there in the Tatooine desert, screaming and whooping when Artoo launched Luke’s lightsaber through the hot, wavering air. We were in the cramped, firelit hut when Yoda confirmed Vader’s secret. Yes, we even joined the Ewoks’ battle cries, feeling the ground shake under the thundering fall of an Imperial Scout Walker.

I was so excited to go to school the next day, because this time, it was me who’d gotten to go see the next Star Wars movie first, and I couldn’t wait to talk about it and see if anyone else had been to opening night. Funny thing is, nobody had. Not only that, nobody seemed as caught up in the whole thing, at least, not the way they’d been a couple years before about Empire. Guess that’s what three years, especially those between third and sixth grade, will do.

Somewhere in the years after Jedi, it became cool to sell the movie short, mostly because of the Ewoks, but also because of the whole Luke/Leia-brother/sister coincidence, and the flip dialogue, and the re-hashing of the Death Star battle. And even though a lot of us first-generation fans recognize those things, I’d bet very few of us felt that way right after seeing it. Weakest of the original trilogy? No doubt — but I don’t remember a single person coming out of that theater disappointed.

Because what I remember most vividly about that night is the moment of triumph when Vader is turned at the last, swooping the Emperor up in those armored arms as John Williams’ score assaulted our ears. A wave of awestruck adrenaline rushed through the theater, and the audience actually stood in unison and cheered, caught up in the climax.

I’ve never seen that happen at any other movie screening.

That’s my favorite movie scene ever. Even three decades and a thousand watches later, it still manages to spark whatever cells hold the faintly-vibrating echoes of that night. For the shortest of blinks, things around me go dark, and I taste hot dogs and Orange Julius and popcorn and Coke and then my throat and guts do a Jell-O shiver and Mom and Dad and Nick and Adam and Mike are there beside me and we’re in a crowd that’s wide-eyed and applauding and grinning in the movie screen’s flicker.

It always passes more quickly than I hope, but as long as those seconds still happen, somewhere I still get to be twelve.

Collect All 21! is available in paperback and in an Expanded Electronic Edition. 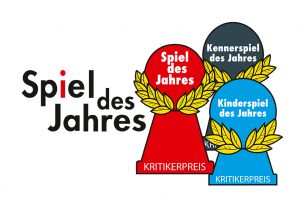