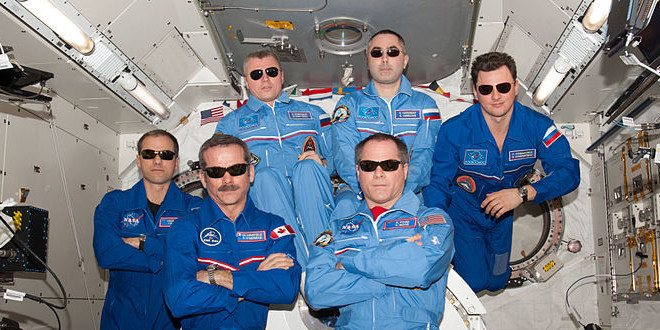 Today, May 23rd, from 3-4 PM EDT, you can join a NASA hosted Google+ hangout with three of the former International Space Station (ISS) astronauts. NASA astronauts Kevin Ford and Tom Marshburn and Chris Hadfield of the Canadian Space Agency are back home in Houston, Texas, and undergoing physical rehabilitation after their recent return from their extended time in the nearly weightless environment.

The three are prepared to answer questions about their daily life on the orbiting outpost. As part of their normal onboard operations, the three were involved in scientific experiments, spacewalks, and normal maintenance.

Google+ Hangouts allow as many as 10 people or groups to chat face-to-face, while thousands more can watch the conversation live on Google+ or YouTube. The hangout also will be carried live on NASA Television and the agency’s website.

If you have a specific question that you would like to ask, submit it on twitter to the NASA social media team! Simply include #askAstro as part of your tweet, and it will be added to the pool of questions that will be answered. Just before the hangout begins, NASA will also be opening a discussion on its Facebook page for questions to be asked. Remember the more original and unique the question the more likely it is to be chosen.

Fantastic Mr. Fox: An Interactive Puppetry Experience You Can Really Get Into!

GeekMom: Between the Bookends: 8 Books We Read in January 2021