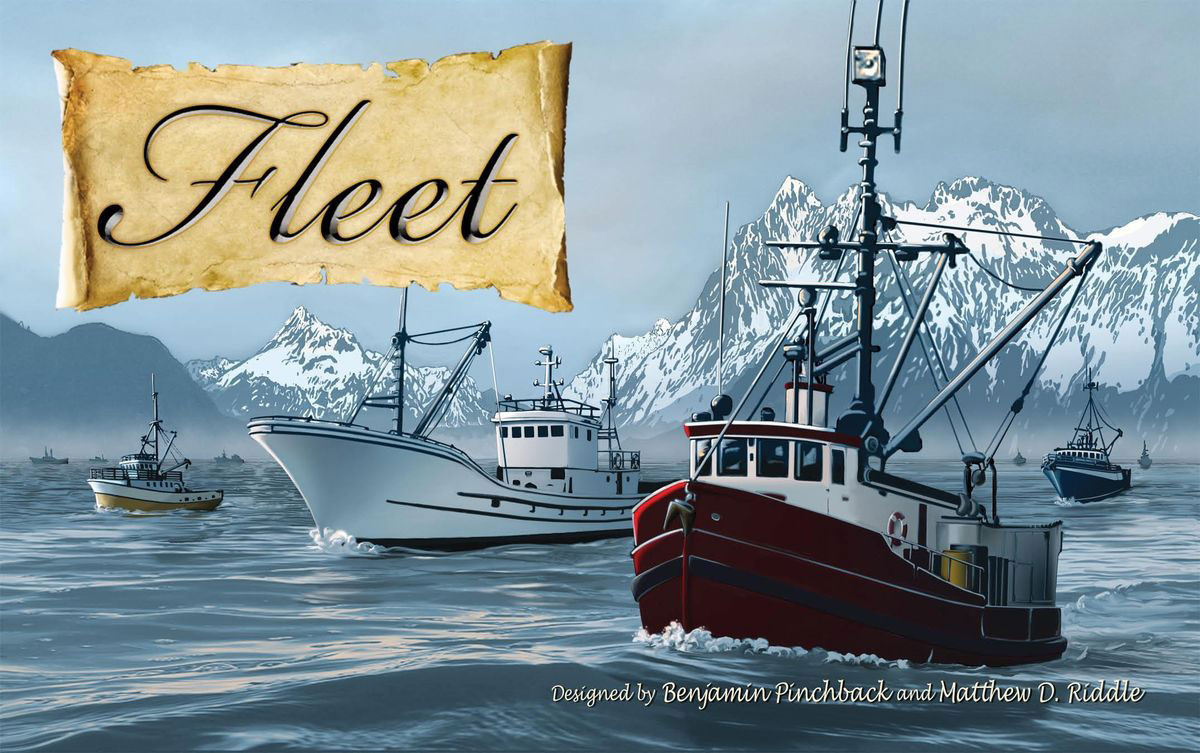 OVERVIEW: You and your opponents are engaged in a high-stakes race — to build a fishing fleet. Wait, hear me out. Fleet is a game about acquiring the right licenses so you can launch boats and profit from this little-known bay. That might sound a little dry, but just wait until you get outbid on that shrimp license you were banking on…

Rating: A nice catch, but better with more players.

Who Will Like It? You don’t have to like fishing to enjoy Fleet, though maybe there’s an added appeal for commercial fishermen. It’s good for gamers who like something that requires a bit of thought and planning, but won’t put too much strain on your brain. And if you like auctions in games, that’s a key part of Fleet.

That said, I can’t tell you how closely Fleet matches an actual fishing operation, but I’m going to wager a guess that the game is simpler. There are limited licenses available each round, which are auctioned, and these are what allow you to launch particular boats, process crates of fish, and so on. However, although the boats have different victory point values, each one catches the same amount of fish each turn, which in turn are worth the same amount. Somehow I find it hard to believe that a crate of shrimp and a crate of king crab are equal in value.

But in this case, since I’m not invested in the verisimilitude of commercial fishing boats, it doesn’t really matter to me as much that the gameplay may not totally line up thematically. It’s close enough for me to enjoy the game.

The licenses are oversized cards, about 3″x4″, making them easy to separate from the boat cards, and they have a lot of different information on them: license type, minimum cost, victory points, and various bonuses you get for having the license. It can be a little tricky to decipher some of the bonuses, particularly the Lobster license, which grants you bonus cards depending on the number of Lobster licenses you have and the number of captained boats you have. The way it’s spelled out on the license makes sense once you know what it means, but tends to make everyone scratch their heads until they’ve looked it up in the rulebook.

The boat cards are pretty straightforward: a picture of the boat in the center, with the type of boat, cost to launch it, victory point value, and some coins at the bottom. The coins show how much that card is worth if you spend it as money instead of using it as a boat. The backs of the cards have a ship’s wheel, which has added meaning when you realize that face-down cards act as captains for boats.

Overall the component quality is fine (and hurray for a small box that is actually sized for the game!), though my boat cards were a little curved and don’t seem to want to flatten out.

Every player starts with one of each of the six types of boat cards as a starting hand, and the rest of the boat cards are shuffled to form a draw pile. Depending on the number of players, you’ll use some number of the standard and premium licenses, shuffled together but set up so that the top of the deck only contains standard licenses. Also, you’ll use 25 fish crates per player in the supply; the rest are set aside.

The object of the game is to get the most victory points, which are earned by buying licenses, launching boats, and catching fish. King Crab licenses also provide some additional bonus points — for instance, for having captains on boats or lots of fish crates. The game will end either when you run out of licenses to purchase or when the supply of fish crates is exhausted.

You pick a starting player and give them the yellow boat token. Each round of the game has 5 phases: Auction, Launch/Hire, Fish, Process/Trade, Draw.

Auction: You set out as many licenses as there are players, and players take turns auctioning licenses off, until each player has had an opportunity to buy one license or decides not to. (Nobody is allowed to buy more than one.) You pay for licenses using cards from your hand (the coin value). Later, you may also have discounts if you have a Shrimp license, or you can use processed fish crates as money if you have a Processing Vessel license. Purchased licenses simply go on the table in front of you. New licenses replace the ones that were purchased; if nobody bought a license this round, then all of them are discarded and replaced.

Launch: Each player may launch a single boat. You must have a license for the type of boat you’re launching (but with a single license you may launch as many of those boats as you want), and you must pay the cost for launching the boat. Then, you may hire one captain by placing a card from your hand face-down on the boat.

Process/Trade: If you have a Processing Vessel license, you may take up to one crate from each boat and place it on the license. These crates may now be used as coins for transactions. You may also trade in one crate from your license for a card. Note that crates which are spent from a Processing Vessel license (for a coin or cards) are discarded from the game, rather than put back into the supply.

Draw: Draw two cards, keep one and discard the other.

Then the starting player token is passed to the left, and a new round begins.

The game ends when there are not enough licenses or when you run out of crates. The player with the most victory points wins. Fish crates are worth 1 point each, but processed fish (those on the Processing Vessel license) don’t count.

So far the rules are pretty straightforward. What makes thing interesting is that each of the licenses grants some sort of bonus, and for most of them the bonuses increase if you have multiple copies of the license:

I missed Fleet somehow during its Kickstarter campaign last spring, but it raised over $37k on a $6,000 goal, so that was pretty impressive. And after it shipped, I heard some great things about it; notably, it was Dice Hate Me’s pick for Game of the Year. So I was glad to finally get a chance to play it.

The basic gameplay mechanic is pretty simple, although I felt that the rulebook didn’t always explain things in the most concise or easy-to-understand manner. You get licenses, you launch boats, you captain your boats, and then you get fish. So far, so good.

What makes the game interesting, though, is that all of the licenses offer different bonuses. Since cards function as boats, captains, and money, you’re always looking for ways to get more cards. On the other hand, since you can only launch one boat per turn (and they’re worth points), if you try to hoard cards instead of launching them, then you’ll fall behind. Each phase you feel the tension in trying to decide how to use the cards you have: spend them to outbid somebody for a coveted license? Save them to launch as boats? Use one as a captain, or save it for money for the next round?

And since the license bonuses can stack, it makes every auction matter. Just because your opponent already has a Shrimp license doesn’t mean she won’t buy another one out from under you — and then she has a two-coin discount on every transaction instead of one. But if you buy this Cod license instead, you can launch a bunch more boats, which will be worth points at the end.

In fact, I think the auction mechanic is what makes the game most interesting — that’s where the player interaction really occurs. Managing your fleet, fishing, drawing cards — none of those things really affects the other players directly. But since the next round’s licenses are sitting there throughout the round, you’ll know how much money you want to set aside for bidding the next time around. Even if you have no intention of buying something, the auction mechanic lets you hike up the price that your opponent has to pay; the question is whether they’ll bow out and leave you stuck paying a bunch for a license you didn’t really want.

The drawback is that I didn’t find the two-player game quite as interesting. In a two-player game, there are only two licenses up for sale each round; you know that whatever you do, the second player will be able to buy the second license at its minimum cost. If it happens that there are two premium licenses out and neither of you can afford it this round, then they’re discarded and you’ll never have a chance to buy them. Because so much of the game’s interactivity depends on the auction mechanic, the first few times I played Fleet (as two-player games), I wasn’t really impressed.

With a four-player game, there’s much more variability. First off, sometimes a premium license will sit there for several rounds until somebody works up enough money to buy it, as long as at least one license gets purchased that round. Also, in a four-player game, at least you know that it’s not guaranteed that the license you don’t buy will automatically go to one particular opponent. This can lead to a lot more kibbitzing, as people try to convince others to bid on something, simply because you can’t let that guy get it. Once I got to play the four-player game, I saw the real appeal of Fleet.

It’s not for everyone, but I think Fleet hits a nice sweet spot: it does allow for some great strategic thinking and has a great social aspect in the auction mechanics, but the overall gameplay is easy enough that you can introduce it to more casual or inexperienced gamers. The theme might not be a big draw for everyone, but for fans of resource management it’s a pretty cool spin. Learning to manage the various license bonuses and to balance the values and costs of different boats will take some time to master.

Tired: Not as great with just 2 players; rulebook can be confusing. 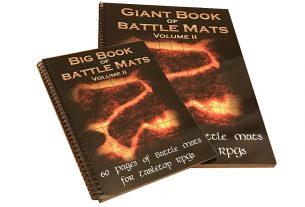