Couture fashion designers and movie costume designers don’t often cross sides. They’re both about making a look, but they’re different fields. That doesn’t mean it never happens. Some characters, because of who they are, need to be dressed in designer labels. The Devil Wears Prada wouldn’t be the same with made-up designers. Carrie Bradshaw wouldn’t be the same without her Manolos and Jimmy Choos. And sometimes, even the geek-appealing shows and movies get characters dressed in high fashion names. Here are a few examples:

Jean-Paul Gaultier is an exception to the seldom-crossover rule, having actually done costume design for many movies, including The Fifth Element. This year he had the honor of being a member of the Cannes jury, only the second costume designer to do so, the other being the late Eiko Ishioka.

In The Hunger Games, the look of those from The Capitol in particular was a huge part of the costume designer’s job description, and Judianna Makovsky created gobs of beautiful costumes, Effie Trinket’s bright garb, taking inspiration most notably from Italian designer Elsa Schiaparelli and her famous pink. But Effie’s feet were dressed in another inspiring designer’s footwear–Alexander McQueen. And to bring it full circle, Alexander McQueen once turned to the geek world for a fashion show, echoing the chess game from Harry Potter and the Sorceror’s Stone (which Makovsky was also costume designer on) in a 2005 show.

In Sofia Coppola’s 2006 Marie Antoinette, the clothes are by costume designer Milena Canonero, but the shoes are Manolo Blahniks. Blahnik studied 18th-century shoes in London and Paris, which made his designs perfect for the film.

What’s Bruce Wayne without a billionaire’s look? In The Dark Knight and The Dark Knight Rises, Christian Bale was dressed (quite well!) in Giorgio Armani. Armani worked with the movie’s costume designer, Lindy Hemming (who also did Harry Potter and the Chamber of Secrets), to create custom suits under a Giorgio Armani for Bruce Wayne label. Bale got two for The Dark Knight Rises, but co-stars Michael Caine, Gary Oldman, and Joseph Gordon-Levitt got their own, and Anne Hathaway’s Catwoman got accessories out of the deal.

Once you start to recognize Christian Louboutin‘s red-soled shoes, you’ll see them everywhere. Start with Pepper Potts in Iron Man. But note that not all red soles are Louboutin, and Valentino and Yves Saint Laurent claim to have done it long before Louboutin. A recently ended lawsuit concluded by giving Louboutin the right to protect its red soles when the rest of the shoe is a different color, but YSL will be able to continue making its all-red shoes.

In the latest Bond film, Skyfall, James Bond is again dashingly dressed, of course. This time Daniel Craig is in Tom Ford, as he was in Quantum of Solace. But other Bonds have had other designers, so I’ll just hit a few:

And naturally this list would be incomplete without the most glamorous swine of the screen, Miss Piggy. In the 2011 film The Muppets, she wore Chanel to play the fashion editor of the French Vogue. And for this year’s Oscars, she appeared wearing Zac Posen with accessories by Fred Leighton.

It’s not always so simple, though. Amy Westcott was the costume designer for Black Swan, and she won quite a few awards for it. Designers Kate and Laura Mulleavy, whose label is Rodarte, are credited for Natalie Portman’s white gown, one of her tutus, and the Swan Lake costumes in the movie. But controversy arose over who actually created some of the designs. And while you might think the gentlemen of Inception are wearing designer suits, each one of them was individually created specifically for the character by costume designer Jeffrey Kurland.

As a final note, a little fashion trivia. Although I did use the word “couture” at the beginning of this post, I did so in the more generic sense. The designers I mentioned are not actually all officially haute couture, which is a term defined and protected by the Chambre do commerce et d’industrie de Paris, a regulatory group that declares which fashion houses are truly haute couture and can thus advertise themselves as such.

Late to the Game: The Settlers of Catan 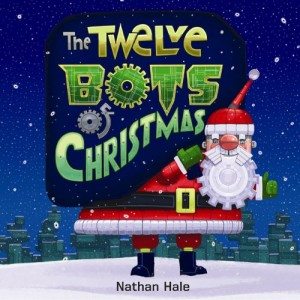 Don’t Miss This Great Robot Christmas Book! The Twelve Bots of Christmas (And A Funny Interview with Nathan Hale)