1. Dr. Leonard McCoy from the first six Star Trek movies – He uses the technology, just like everyone else in the main cast, but he grumbles about it—especially about the transporter, which, really, has to be pretty close to warp drive on the usefulness scale. If he ever came out with one of Trek‘s trademark technobabble lines, I don’t remember it, and I honestly can’t think of another major character that could be said about. 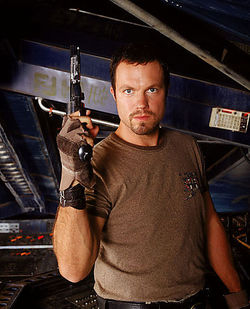 2. Jayne Cobb from Serenity – He’d sooner shoot you than talk with you about anything intellectual, and that’s not hyperbole. He doesn’t care what anyone thinks about him, doesn’t take crap from anyone, and would rather solve any problem by hitting it, shooting it, or blowing it up.

3. Bill Lumbergh from Office Space – “So, Peter, what’s happening?” He’s a complete dork, but not a geek. He’s just too deadly dull to be a real geek. And no geek could tell a group of coworkers about next Friday being Hawaiian Shirt Day. 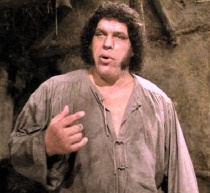 4. Fezzik from The Princess Bride – As he himself says, it’s not his fault he’s a giant. He’s a great friend to Inigo, a genuinely friendly guy who doesn’t want to hurt anyone, and only does because Vizzini threatens him with abandonment. This is not to say that a geek can’t also be a nice person, of course, but Fezzik is a very simple person, not used to thinking for himself.

5. Prof. Jerry Hathaway from Real Genius – Yes, he’s a scientist. Yes, he’s the one in charge of the whole group of geeks. And yes, he’s a college professor. But, in my opinion, nobody who hates popcorn can be considered a geek, so he makes the list. Besides, he’s a great villain and, really, there’s no other character in the movie who could be considered mainstream at all, and how could this movie not be on the list? 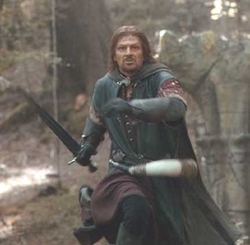 6. Boromir from The Lord of the Rings: The Fellowship of the Ring
– He’s basically a jock who doesn’t really understand the power of the ring. Even so, he is an integral part of the fellowship until he falls under the ring’s spell and tries to take it from Frodo. He dies heroically saving the hobbits, still not really understanding what it is he’s dying for.

7. Winston Zeddmore from Ghostbusters – He only takes the job as a Ghostbuster because he needs the paycheck. He’s more a man of faith than of science, unlike the other three members of the team. And of course he has one of the best lines of the film: “Ray, when someone asks you if you’re a god, you say ‘YES!'”…not that that’s really relevant to the discussion, but I had to mention it.

8. Carter Burke from Aliens – The company man who seems to care about Ripley until it serves his own selfish interests better to betray her. He clearly has never seen a single science fiction movie, because otherwise he would’ve realized that the aliens were going to get him, so how much of a geek could he be? 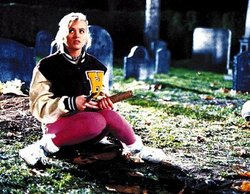 9. Buffy Summers from Buffy the Vampire Slayer – In the TV show, she (pretty much) embraces the role of Slayer, so she’s pretty much lost her mainstream status. But she starts the movie as your basic cheerleader character, and only later accepts that she’s the only hope for winning the fight against the vampires, and even then she does it in her own way.

10. Sam Lowry from Brazil – He’s a low-level bureaucrat caught in a system that doesn’t care at all for him, escaping only through fantasies imagining himself as a romantic hero. In this unsubtle satire, Lowry doesn’t even realize he has any option but conformity until his dream girl enters the picture. This is probably the only geek movie in which, really, none of the characters is a geek—the society they live in simply wouldn’t allow it.

GeekDad Goes from Wired.com to the AP Wire!