Liu: I know you have four daughters — is Zita (or another character) anything like them? Do their personalities appear in your work as characters?

Hatke: Zita’s probably got a little bit of all my girls in her, but she really tends to be a lot like a pint-sized version of my wife, Anna. I think all my girls influence the story in different ways with their personalities. There is a race of cloak-wearing chicken creatures, for instance, that I put in the stories entirely to entertain my daughter Angelica. She has her own flock of chickens and loves them more than any other animal.

Liu: Are there are any references or “Easter eggs” that we should look for in this book?

Hatke: Yes! First off, my two older girls each were allowed to draw a creature for the book. I Photoshop their creatures into the backgrounds. In Legends one of the creatures is on Piper’s ship and the other is on a poster. There’s also an orange pom-pom hat that bears a resemblance to Jayne’s hat (from Firefly), another poster in one of the backgrounds shows my 9-year-old daughter’s character “Star Chicken.” And, very small in the background of page 129, you can see two superhero figures. Those are based on costumes my friend Denver and I made and wore years ago … back when we were superheroes.

Liu: Awesome! I’ll have to go back and look for those. Where can I get my hands on a copy of Gilliam’s Big Book of Robots and Automata (which appears in the comic)?

Hatke: Now that’s a good question! Unfortunately, it’s out of print which is why only serious collectors like Piper seem to have copies of Gilliam’s books. Gilliam’s Guide to Sentient Species and Gilliam’s Big Book of Robots and Automata are both interesting books, but they’re full of factual errors. And that’s probably why they’re out of print. Liu: I noticed you mention in the “About the Author” that you like “rolling 20-sided dice.” What games do you play, and do you game with your kids as well?

Hatke: I meet with my D&D friends about every week. We play a lot of different games but mostly Dungeons and Dragons 3.5 edition and different GURPS campaigns. Sometimes, for very goofy, “holiday special” type games we use a simple system called RISUS. Strong Strong in a spacesuit by Ben Hatke

GURPS (Generic Universal Role Playing System) is a lot of fun for building any kind of game you want. I ran a 1950s paranormal game for awhile, which was my first experience as a Game Master. It’s a great storytelling exercise, and involves a lot of thinking on your feet.

I also periodically play with my kids. We play a game called Faeries Tale (from Firefly Games). It’s a wonderfully simple introduction to role playing, and even my 4-year-old plays. I highly recommend it! One of my friends has the Mouse Guard RPG and I’d like to borrow that for the next time I run a game for the girls. We love the Mouse Guard books, so I am guessing the RPG will be pretty popular at our house.

Liu: I’ve actually been trying out the Mouse Guard RPG with some friends. I have very little experience with RPGs but I love Mouse Guard and this seemed like a good way to try it out. I’ve been enjoying it so far!

One last question: I know that it takes a while between the time you finish the artwork and the time the book actually hits shelves. What is that waiting time like? Do you feel distanced from the book once it’s actually ready? Hatke: Honestly it’s not the easiest thing. It’s hard to be patient! When I finish a book I am just chomping at the bit to share it with people. I want to see what real readers think about the story. But then it goes into production limbo for a while — almost a year, and by the time it arrives in readers’ hands I’ve already moved on to the next thing.

I get my dose of instant feedback by making web comics. Currently I’m doing a little series of Robot comics and that helps fill that desire for instant feedback that you don’t get with the larger projects.

Liu: Thanks for sharing your sketches and for taking the time to answer some questions!

Legends of Zita the Spacegirl is available now in hardcover or paperback. Zita and friends by Ben Hatke 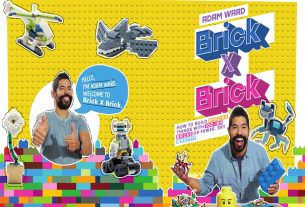