Despite the well-known saying “Less is more,” I’ll admit that — most of the time — for me, more is more. I try to curb my spending, I do my best to curb my consumerist impulses, but the fact is: I like stuff. It’s hard to avoid, particularly in the US, even in the middle of a recession.

Well, maybe it’s too late for me, but at least I can start encouraging my kids to consider the idea. Here are three (new and upcoming) picture books that illustrate the principle “Less is more.” The first is a pretty straightforward illustration of having too much; the second deals specifically with our addiction to screens; and the third is a little more abstracted but I think serves as a nice illustration of the idea.

We’ll start with More, written by I. C. Springman and illustrated by Brian Lies. The book features a magpie finding treasures for his nest: a marble, a Lego brick, a coin. But as he collects more and more things (and deposits them in an increasing number of nests), his mouse friend begins to worry that he’s gone from some to lots to plenty to much too much. It takes the mouse and his friends to dig out the magpie from the stuff he’s collected, at which point he learns (at least for now) to be satisfied with enough.

The text in More is pretty sparse: just a few phrases scattered across the pages: “Nothing. Something. A few, several, more and more and more.” The main attraction is the artwork by Lies, who also created a series of fantastic bat books: Bats at the Beach, Bats at the Library, Bats at the Ballgame. (My favorite of those is the library, which features a bat imagining itself in a variety of classic children’s books.) The magpie is beautifully rendered, with lots of detail and plenty of attitude. The mouse friend is expressive — and somewhat reminiscent of Lies’ bats, actually.

One fun detail about the book is that a lot of the clutter illustrated in the book actually came from Lies himself: he dug into bins and boxes and his own collections of things, and found things like an Austrian shilling that he got on a trip during high school, or his great-grandfather’s harmonica. Illustrating the book (and finding all these things to illustrate) pushed Lies toward the realization that his own house could use a little de-cluttering.

It’s a beautiful book, and one that I’m going to leave in a conspicuous location for my kids, in the hopes that maybe they’ll be encouraged to get rid of some of their unused toys. More will be available in March, but is available for pre-order now. Next up is Goodnight iPad, by the pseudonymous Ann Droyd. It’s a parody of the classic Goodnight Moon, of course. But in this room instead of a telephone and a red balloon, there’s “an iPad and a kid playing Doom.” There are ebooks and Angry Birds and 3D HDTVs and YouTube clips … “and a fed-up old woman who was trying to sleep.”

So then she gets up and starts collecting all the gizmos and gadgets. Goodnight iPad. Goodnight Doom. All of the things go out the window as everyone — both kids and parents — look on in horror. But then she gets all the lights turned out and all the bunnies tucked into their beds, and they all go to sleep … except for one little bunny who gets out his flashlight to read a (paper) copy of his own classic bedtime story.

Goodnight iPad probably won’t suddenly make your kids give up their Nintendo DS (or you give up your smartphone), but it’s a funny reminder that maybe sometimes we spend a little too much time in front of screens. I do think it would have been fun to see the artwork done in Clement Hurd’s style, but at least the text is done in the same vein as Margaret Wise Brown’s poem, with the same rhythm and pacing. Goodnight iPad was released in October and is available in bookstores and on Amazon.

Last up is Green by Laura Vaccaro Seeger. Now, Green isn’t really about getting rid of stuff or uncluttering your life, but it is itself an example of how less can be more. The book is a celebration of green: forest green, sea green, pea green, glow green. Each page is just the name of some type of green, accompanied by a two-page spread showing one of Seeger’s paintings.

And, like her Caldecott Honor Book First the Egg, each page has cut-outs that allow the painting on the next page to show through, in fun little ways. Two leaves on a tree in the forest become two fish swimming in the sea on the next page. A luna moth becomes the center of a flower. It’s a very cool effect, and even though there’s not much text to the book it can be a slow, contemplative journey through the various shades of green.

You can see a few sample images from the book on Macmillan’s website — just scroll down to the “interior view” section. Green will be published late March, but you can place pre-orders now. 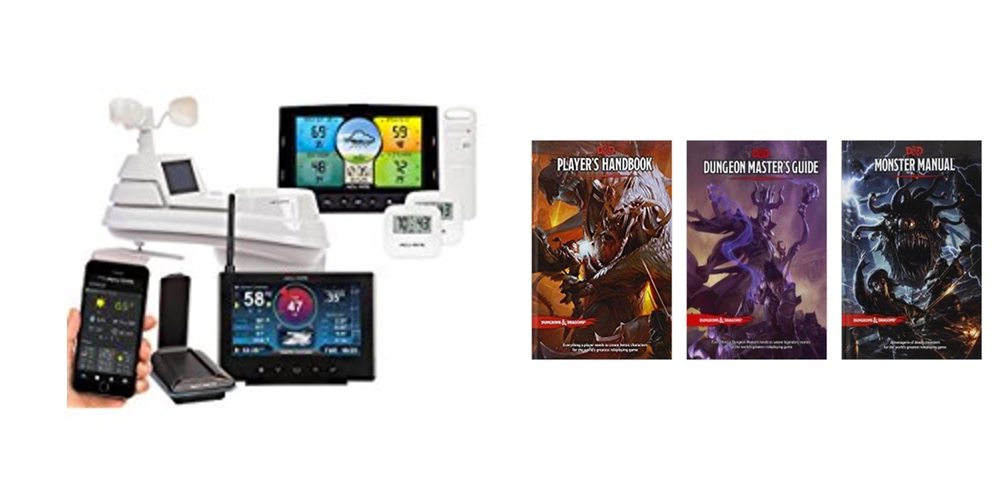 Save on AcuRite Weather Stations, Get All Your D&D Books On Sale – Check Out the Daily Deals!