I have several friends who are the moms of toddlers and preschoolers. I offer them my sympathy on a regular basis. My youngest child is ten. I loved the years that my kids were small, but I have not forgotten how incredibly hard and overwhelming they were either.

These days I’m thrilled that the only thing stopping me from getting a full eight hours of sleep is my cell phone beeping with a text that one of my teens will be home a bit late. I have no high chairs to sweep around. There are no loaded diaper bags at my front door. And, thank the heavens, it’s been years since anyone had a potty accident on my carpet.

In fact, my sister always says she’ll never buy a house from someone who has potty trained a child or a puppy there. Too much potential for mystery stains to emerge from every room of carpet in the house. We’ve all been there. Pee pee happens.

Since I have successfully (eventually) potty trained four children, my friends with little ones sometimes ask my opinion on the matter. I start with my disclaimer: “This worked for me. It may or may not work for you. Don’t see that as failure on your part, or genius parenting on my part. I just lucked out and found the right thing for our family.”

Next, I default to my mother’s sage wisdom. She raised all five of her own children, countless foster babies, and then years of baby sitting charges. The woman now sits in the special part of heaven where only Gold Member potty trainers get to go.

When it came to potty training, she said it was the key. Her philosophy was that paper diapers pulled too much of the wetness away from the toddler’s body. It wasn’t uncomfortable. There was no incentive to not wet. Walking around with a heavy, wet piece of cloth between your legs was really motivating to not wet again.

I tried this with my kids. I bought plastic diaper covers (the old fashioned kind, they were the most versatile) and hooked up the cloth diaper to my 2-3 year old. It worked well for most of them. One of my sons was just hard headed enough that it was worth winning to him, on principle alone.

Then, once my oldest was potty trained, I stumbled upon another way to potty train her younger siblings, when it became their turns. I used that magic trick called peer pressure.

I bought  huge bag of M&Ms and poured them in a glass bowl. Then I cleared a shelf in the top of the cabinet, where they could see it, but could not reach it.

The rules went like this: If potty training recruit went potty in the toilet , he got three M&Ms and his big sister got two. If he pooped. they each got an extra.

This set up a system where *I* wasn’t the one constantly asking, “Do you need to potty?”, his sister was. She had a driving motivation to get him to let go in the right place. She not only related to him more effectively, she rejoiced with him more energetically, since she actually got a reward too. He never realized her claps, cheers and hugs were more about her sweet tooth, than his accomplishment.

As their younger brothers were born, and took their turns, the system remained in place. We definitely went through more M&Ms in the later years,  but it was worth every bright one of them.

I feel for those of you headed into this fun new world of knowing where every toilet is in every store you shop. I won’t blame you, if you buy Pull Ups for long car trips and use any kind of bribe that matters to your kid, to get the job done. It’s tough enough being in charge of little people, 24 hours a day. Sometimes adding the job of making them civilized just seems downright cruel. 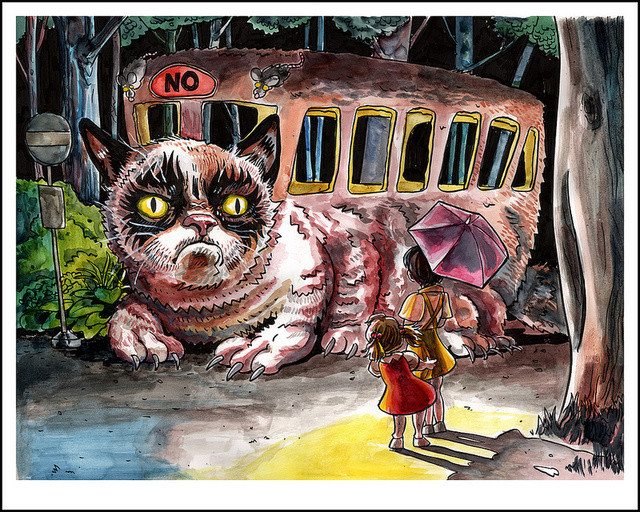 Grumpy Catbus is Out of Service

5 thoughts on “Potty Training: How I Ended Up With Four Dry Teenagers.”