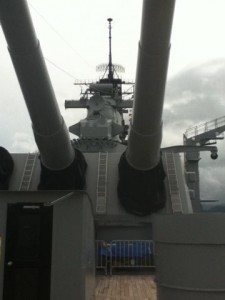 Following our harrowing day of bus rides in Honolulu, we set out early to spend the entire day at the Pearl Harbor Historic Sites. A recent renovation makes it super easy to maneuver all four of the sites. Two of the featured sites–the USS Missouri and the Pacific Aviation Museum–are actually located on Ford Island, an active military base in the middle of Pearl Harbor. We pick up our tickets and head for the free shuttle bus that will take us there.

First stop: the USS Missouri. This was the site that Carson really wanted to see during his visit and it didn’t disappoint.

Our tour guide walked us around the deck of the ship, pointing out various details and sharing factoids about the ship itself and the history of the USS Missouri. While the ship sits in Pearl Harbor today, the USS Missouri wasn’t actually there on the “day of infamy”–she was still in production in New York. The Missouri, an Iowa class battleship, joined World War II in the final months and participated in several critical battles, including the Allied invasion of Iwo Jima. (In later years, Missouri participated in the Korean War and Operation Desert Storm.)

It’s the battle history and the firepower of the USS Missouri that enthrall the boys. They listen intently as our guide tells us that the barrel of the 16″ guns on deck weigh as much as the Space Shuttle and the projectiles weigh as much as a Ford Mustang. (How does this ship stay afloat? I wonder.) They are astounded to hear that three barrels can fire a round as far as twenty miles every 60 seconds. And they are humbled to stand on the spot where World War II came to an end.

Our guide tells us in detail about the 23 minute ceremony in which the Japanese surrendered, thus ending World War II. On board the Missouri, representatives of Japan, General Douglas MacArthur, and other Allied representatives signed the Instrument of Surrender on September 2, 1945 in Tokyo Bay. General MacArthur used six different pens to sign his name, giving them as souvenirs of the historic event to several key players in the war – and one to his wife. The technology of the day: the ceremony was filmed in 16mm and then sent to movie theaters. Anyone who wanted to see details of this historic event paid admission at their local movie house.

Below decks, we take a self-guided tour of the maze of rooms. We maneuver with the aid of marked arrows, but wonder how anyone can ever find their way around. Carson stops to test out a bunk, but I’m more interested in the various rooms set aside for food preparation. There’s a kitchen, a bakery, and even a vegetable preparation room. On display is a Christmas menu that includes turkey, ham, and duck along with side dishes like sweet mixed pickles, raisin sauce, stuffed celery, and fried rice.

During our visit, Fely Sunio was on board. She was ten years old when the Japanese attacked Pearl Harbor and remembers it vividly. She had taken her two younger brothers out crabbing, even though there was a lot of noise coming from Pearl Harbor. Standing at water’s edge, she saw two Japanese fighters approaching, flying slow and low along the coastline. One of the pilots waved at the children as he approached. “Wave back, maybe he won’t shoot us!” she told her brothers. Shortly thereafter, her father came to tell them they must come home to safety.

Hearing this personal account from someone who was actually near Pearl Harbor during the attack was like touching history for the boys, who up until now had only read about the attack or heard second-hand stories.

We enjoyed our time aboard courtesy of the USS Missouri.