, in all the colors of the rainbow and more, and it just happened to jump into our basket. On the way home the little lady was telling us about all the things she was going to make with it, and I had the idea to bring it to life, just like Wallace & Gromit

. She found the idea amazing, “How can you do that Daddy?” she asked, “Are you magic?”
“Of course”, I replied, I just need a bit of help from my trusty old iPhone to make the magic work.

Read on to find out how the magic works!

Whilst the ladies prepared the cast members, props and sets, my job as Director of Photography involved cobbling together a way to hold the iPhone steady on the tripod. The Glif isn’t quite ready for prime time yet, so I had to improvise using the standard tripod mount, securing the iPhone to the rubber base with two elastic bands. In order to get the angle of the shot correct, I ended up having to put the screen of the iPhone against the base as otherwise parts of the tripod where visible in the frame. Obviously this made it tricky to see what we were shooting so I used two erasers to hold it away from the base.

To do the actual recording I used the 99 cent iTimeLapse app. It has great controls over every aspect of the recording process, from selecting the capture resolution (all the way up to the iPhone’s highest) and time interval (from manual to one shot a day, or even sound activated), to when to start and stop capturing (after a certain number of frames, on a certain date, or after a set amount of time etc). For this project I chose to use manual capture and 1600×1200 resolution – which is enough pixels to make a 720p HD movie from the results.

With everything set up and ready to go, I consulted with my Director on what the action was going to be and started shooting. I took about 20 shots before moving any of the actors to allow for a bit of lead in time and then the painstaking process of moving the actors and props a few millimetres at a time could commence.
First, two balls rolled into the scene, followed by the two dogs. The dogs then picked up their balls and brought them forward to the viewer and dropped them. Then there was an urgent call of nature – kids are never too young for toilet humour. Feeling refreshed, one of the dogs spots a bone and the requisite chase ensues.
It was at this point that the Director wanted to introduce a new character – a little mouse and her cheese. Rather than having to make the mouse walk into the shot, I decided to swap the two balls for her and her cheese as the running dogs obscured them. Finally the mouse eats the cheese and exits stage left.

iTimeLapse has a built in renderer which stitches all the frames together into a movie which you can instantly share on Facebook, Vimeo and YouTube or you can send the video to the iPhone’s camera roll or email it directly to the Hollywood talent scouts. However, I wanted a bit more control over the export so I used the Export Frames option, which places every frame into your camera roll, ready to be imported into the computer.
Once they were all safely on the iMac, I went through the 400 or so photos and removed a couple where I’d been a bit to eager with the shutter release and my hand was still in the shot and then imported them into QuickTime 7 using the ‘Open Image Sequence’ command, and set it to 12 frames per second. This again stitches all the shots into a movie file which was then exported to a .mov using the highest possible quality settings.

The resulting file was about 3GB and in a 4:3 ratio, so to make it more manageable I opened up Handbrake and set it as the source, as Handbrake has much finer control over the cropping and ratio of its output. In Handbrake’s Picture Settings window I set the width and height to 1280×720 and cropped 20 pixels from the left and right and 80 from the top and bottom. These settings where obviously specific to my movie, yours may need to be different. After selecting the H.264 codec and setting the quality to maximum I exported the movie once again. This file was now down to a more manageable 200MB and perfect to be drag ‘n’ dropped into Garageband to have a soundtrack added. I gathered the ‘crew’ around the computer and we dubbed the vocal track over the video live using the internal mic. We did two takes in the end and I chopped them up a bit to sync a bit better then added a tweeting birds background sound and a little music track.
When a Garageband project has a video track, the ‘Export to Disk’ option can generate a movie right there for you and has a setting for the Apple TV, so I chose that and the final file was only 20MB in size. Time to grab the popcorn while the movie copies across to the Apple TV.

I don’t think Nick Park really has anything to worry about, but it was a great way to spend a rainy afternoon. When I think back to my college days (over 15 years ago – eek) and the equipment I used then – the Beta tape recorder was about the size of two tower computers a weighed a tonne – it’s amazing that you can now do it with just a phone!

Let me know on twitter, @GeekDadNath if you have a go yourself. 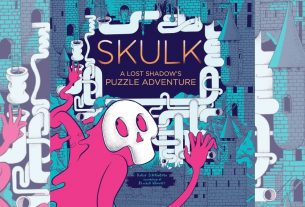