Though my kids are mostly too young to stay up for Saturday Night Live, we occasionally watch parts of the show online. Currently, their favorite is the Timecrowave sketch. They love it, not the least of which because of the Nazis, the giant cat at the end, and the talk about danger to the space/time continuum.

Their interest in the sketch started me thinking about alternate history stories in general.

I’ve always been fascinated by the idea that one change, large or small, can forever alter our world. I got hooked on alternate history stories in my teens after reading number of great stories in Asimov’s Science Fiction magazine and many of them have stayed with me. When I started to write my novel, Dinah of Seneca, it quickly morphed from a fantasy tale based on several different cultures into an alternate history where the Roman Empire and Vikings have established colonies in North America. It just seemed more fun that way.

So, inspired by the SNL sketch, I compiled a list of my favorite alternate history stories, with input from my kids and the geek husband. Obviously, these stories stayed in my mind, given that they’re about the Roman Empire ruling North America. The hero of the story is Aquila, a Lakota warrior. The narrator of the stories is the befuddled Roman in charge, who keeps talking about how backward the barbarians are but never quite seems to win in any encounter with Aquila. The writer also had a series of stories about a time detective whose time machine is a garbage can and from the looks of some of the descriptions of his books that are now available, he’s apparently tied these two series together.

They’re wryly funny and incredibly imaginative. Sucharitkul, as I discovered while doing research for this article, is also a composer and is currently the artistic director of the Bangkok Opera.

I mentioned this book in an earlier post about novels I wish had sequels. Like many alternate history stories, it revolves around a key point in English history. This time, it’s Richard III and his succession to the English throne. Part alternate history, part horror, this brooding story adds vampires to the mystery of who killed the Princes in the Tower.

I also mentioned this collection in a previous post. Unlike many alternate English histories, which tend to hinge around the Tudor era, this one goes all the way back to Richard I’s death in 1199. Richard died young and without a direct heir, leading to his brother John inheriting the throne. In this history, Richard recovers from the arrow wound that killed him in reality and is later succeeded by his nephew, Arthur. This not only leads to England’s continual rule by the Plantagenets but the discovery and shaping of magic as science. The hero of the stories is Lord Darcy, a Sherlock Holmes analogue, assisted by his Watson, a forensic sorcerer.

Nazis are another popular staple of alternate history and it seemed wrong to put together a list without one. In this world, they Nazis won and the story is set in 1964 in a world where Adolf Hitler is still alive and America and Germany are involved in a Cold War. The main character is a German police investigator who tries to solve a simple murder that, of course, leads to a conspiracy at the highest levels.

5. Guns of the South by Harry Turtledove

Turtledove has written many alternate history novels but this one, where the South wins the Civil War, is my husband’s favorite. White supremacists from the future go back in time and supply the South with AK-47s. Thus armed, Lee has the victory. Subsequent events, however, do not shake out the way the time travelers wish as Lee turns out to have a conscience.

The alternate history is intriguing and I can see why my husband, who enjoys non-fiction about the Civil War, would like it. But I do have to say that I think making Lee into a hero might be doing history a disservice, as he did fight for a system that supported slavery and he was well aware of this fact. I’m not certain at all that victory would have changed his mind about it, as he does in the book.

6. Bring Me the Head of Anne Boleyn edited by the late Martin H. Greenberg

The rise and fall of Anne Boleyn seems to be not only of continual interest to historians and fodder for many movies and televisions shows but also draws science fiction writers into its web. I blame Asimov’s yet again for this entry because I first read one of the stories in this collection, about time travelers collecting Anne Boleyn so she would die as she does in all the chronicles, in the magazine.

7. Murder by Magic, Twenty Tales of Crime and the Supernatural

The Tudors again play a key role in my favorite story from this collection, “The Necromancer’s Apprentice” by Lillian Stewart Carl. Robsart is a fairly obscure name as far as Tudor histories go but if you recognize it, then you’ll know what the story is about. During the early reign of Elizabeth I, it was widely rumored that she might make Robert Dudley her consort. The only problem was that Dudley was married, to one Amy Robsart. Amy, however, perished by falling down the stairs at her home. It was supposed that Dudley murdered his wife so he could marry Queen Elizabeth. However, the resulting scandal scotched any talk of marriage and Elizabeth remained the Virgin Queen. 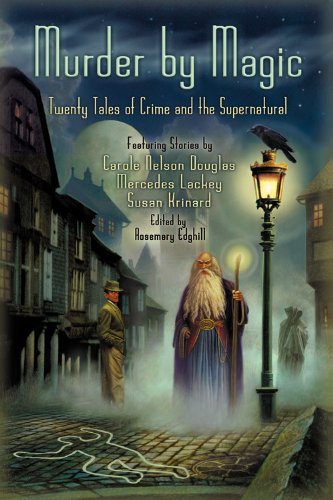 My kids get the credit for this entry. This series, available in both manga and anime, is set in a world ruled by three main empires: The Holy Britannian Empire, the Chinese Federation, and the Euro Universe. The turning point is way back in history, when Caesar’s conquest of Britain was thwarted by the banding together of the Celtic tribes under one leader. This led to a tradition of absolute monarchy in Britain.

But that’s all in the distant past so far as the main story — set in 2010 — is concerned. Japan’s been conquered by the Holy Britannian Empire and its citizens are held in utter thrall to their new overlord. But then the discarded heir to the Empire is determined to fight against his family and takes command of the Japanese resistance. My youngest son said the plotting was as “complicated as Harry Potter’s worldbuilding.” In any case, three of the four kids in the house are addicted to the show and the manga.

9. The End of Eternity by Isaac Asimov

I couldn’t resist putting in a book by Asimov. This is one of his earlier stories, first published in 1955. It concerns the actions of an agency outside time that has responsibility for something called Reality Change. The books explores a number of different timelines but the central clue to the mystery of the book is the inclusion of the image of a mushroom cloud — an atomic explosion — in a magazine in 1932. This leads to the time travelers affecting the decisions that eventually led to the creation of the atomic bomb.

10. The Difference Engine by William Gibson and Bruce Sterling

This doesn’t exactly fit my favorite type of alternate history stories, which is having an event already known unfold in a different way. Instead, this alternate history is based on the invention of a type of computer in the Victorian Age. But I had to include this book because it’s one of the first steampunk novels that I’ve ever read and I love the juxtaposition of Victorian Society with more advanced technology.