As I’ve heard, it’s always nice to have a distraction. And, judging by the number of answers this week, quite a few of you enjoyed this cryptogram. A big thanks to everyone who turned in an answer to this week’s puzzle, my first as co-puzzle master. As quite a few of you pointed out, there was a minor mistake in one of the conjunctions used in the quote. Nevertheless, after looking at all the correct answers and randomly picking one with the cast of several dice (which were not speaking to me), the winner of this weeks $50.00 Thinkgeek Gift Certificate is Robin Bjorklund!

Nearing the end of a marathon gaming session, Dan was feeling pretty tired. With each roll, he began to notice a pattern — he began to think the dice were talking to him. So Dan began keeping track of his rolls and, sure enough, there was a message hidden in the dice. After a bit of trying, he figured out the cipher and he ended up with a very geeky quote. Can you figure out what the dice were telling Dan? This cryptogram solution is a substitution cipher, known as the Caesar or shift cipher. Once converting the numbers in the puzzle to letters where A=1, B=2 and so on (note the combinations of 20 + 2 or 4 and no die totaling more than 26), we’re left with a message of utter gibberish:

But, if we note on the fifth line of the puzzle, there is a single letter word, suggesting one of the most common one letter words “A” or “I”. If we shift the letters to solve for “A”, where A=24, B=25, C=26, D=1, etc., we have our solution, a quote from the first Ghostbusters movie:

RAY, IF SOMEONE ASKS YOU IF YOU’RE A GOD, YOU SAY YES!

Tune in next week as the other Dave, Dave Giancaspro, tweaks your gray matter with another fun puzzle. 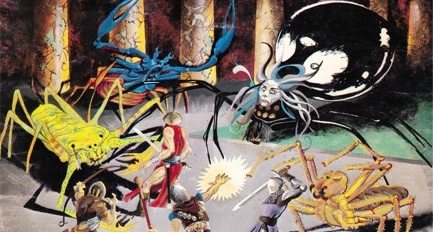 The 10 Best Classic D&D Modules I Ever Played #7: My Spidey Sense is Tingling