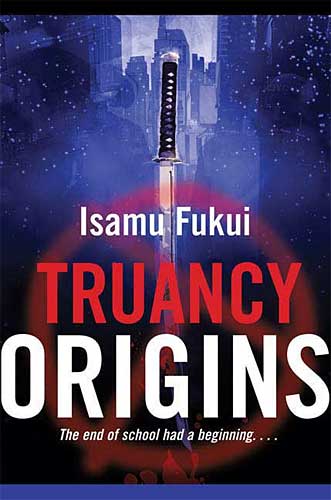 Last year GeekDad John Baichtal wrote a review of an alternate reality novel by a 15-year-old Stuyvesant High School student which said some readers might find the writer’s "promise as an author and the novel’s back-story far more compelling than any tale of teenage angst."  I beg to differ. I thought Truancy, by Isamu Fukui, was an amazing, compelling work that was not only a good read but one with a unique voice and point of view. And I say that as someone who does not read a lot of books heavily influenced by Kung Fu movies.

While Truancy got a generally good reception, I was amused at how many reviewers argued with the author’s premise that school is really, really bad. One interviewer — whose sister attended the same elite public high school in New York City as Fukui — even tried to make the argument that students in other parts of the world would love to have the opportunities Fukui did. (A variation on the "children are starving in Europe" defense, which as far as I know never convinced anyone to eat their peas.) Having lived through 13 years of public school, I can report that for many people institutionalized education is indeed really, really bad — so bad that we go to great lengths to keep our own kids out of it. To minimize that negative experience because the sufferer is young, or talented, or even socially privileged, is a mistake, in my opinion. And I applaud Fukui and his family for having the courage to make that message known.

Fukui, who is now 19 and a student at New York University, has just come out with a new book, Truancy Origins, that lays the groundwork for the first story. My GeekTeen John volunteered to write a review of the new book. Here it is:

Truancy is about a city that uses school as a way of controlling the population by making the students obedient. It follows a student named Tack who joins an underground student militia called the Truancy run by a kid named Zyid (whose name is later found out to be Zen). Tack also meets Zyid’s pacifist brother Umasi , who guides him through the book. [Mom’s Note: As my younger son pointed out, Umasi is the author’s name backwards.] In Truancy Origins, Fukui tells about Zen and Umasi’s history — starting with them finding out about what the mayor is doing to the students, and how they deal with the problem in their own ways.

Even though I didn’t relate personally to Truancy Origins (I’m homeschooled), I did understand and enjoyed the book a lot. Fukui repeats his message from the first book – which is that schools are severely flawed. He describes how schools expect students to  memorize facts but don’t reward them for other kinds of learning.

I enjoyed how Fukui took minor details about the history mentioned in the first book and made them main plot points in the sequel. Going on a little rant here, a lot has been said how unrealistic his characters act, and I agree. But the book doesn’t need realistic characters to work. It’s not a realistic book in the first place.

This book is not for younger kids, not only because of the content (there is a lot of violence and swearing) but because they won’t understand the message. I would recommend this book for 13 and up. Fukui is at work on the last book in the trilogy, Truancy City. I’m looking forward to it.