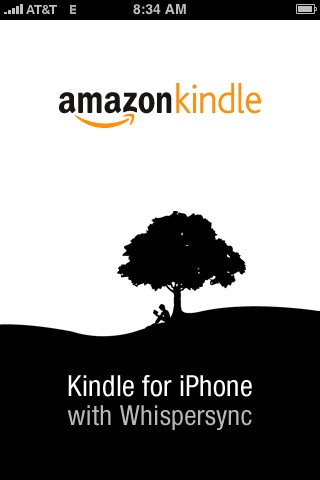 Amazon dropped the other shoe in their Kindle-fest this month by releasing (or finally having approved) a book-reader application for the iPhone/iPod Touch, allowing users to choose from tens-of-thousands of titles to download and read on their handsets.

We’ve reviewed dozens of kid-focused iPhone/iPod Touch apps and games, many of them focused on early language development, and centered around the idea that since parents are going to hand their iPhones to their kids as a distraction in the car, in line at the store and so forth,  why not make the distraction educational as well?  And though there’s the ubiquitous browsing capability on all smartphones, and RSS is a great way to get news, there hasn’t been a great and well-supplied book reader until now.

With
Kindle on the iPhone books are a click away from the palm if your (or your kid’s) hand.  And because of the aggressiveness with which Amazon is getting books into the Kindle format and making them available, the list of titles is growing by leaps and bounds every day.

The reader is simplicity itself, coming across in usability just like the iPod app native to the iPhone/iPod Touch.  You buy a book on Amazon, either from your desktop computer or even through Safari on the iPhone/Touch itself (though not yet through the Amazon iPhone app, but you have to assume that’s coming), and in seconds it is delivered to the Kindle app, ready to be read. 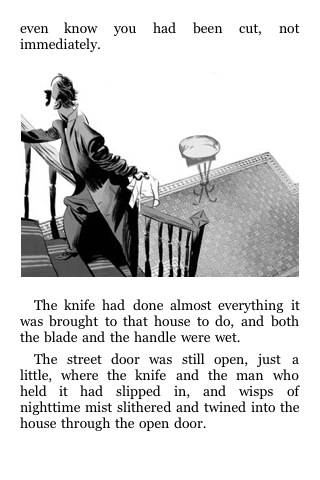 Paging through the books is exactly like viewing a pdf, with simple flicks of the finger enough to change pages, and more complex commands accessed through on-screen buttons that will appear with a tap.  And while the screen is significantly smaller than the
hardware-version of the Kindle, where the iPhone beats the pants off e-ink technology is in contrast and readability.  Rather than 16 levels of gray text on a gray background, the iPhone is full color. Text is coal-black on paper-white, and font sizes are adjustable, making the reading experience highly functional. Plus illustrations and pictures really pop.  Of course, this comes at a huge trade-off with respect to battery life, but if you’re an iPhone owner, you already know how to manage your power requirements, and probably have chargers in your car and on your desk at work already to feed your handset.

As I browsed the Kindle book store on Amazon, I got more and more excited by the number and quality of titles available, especially for kids.  However, one disappointment (and confusion) I hit was when I tried to purchase and load the current issue of Analog magazine (obviously a big geek temptation), for which the Buy Now button clearly says I can purchase and send to my iPhone.  While I had already been able to sync other book choices to my iPhone, 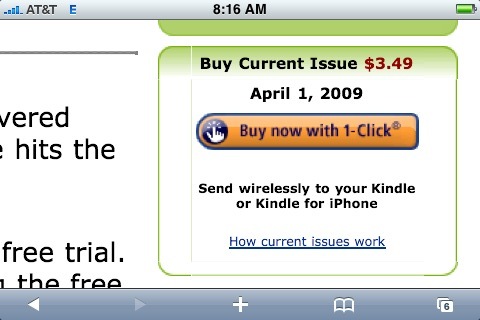 Amazon suddenly acted as if I didn’t have a device registered for the service. It took a little hunting around the help pages to find out that magazine and newspapers aren’t currently supported on Kindle for the iPhone. I’m not sure this is simply something they haven’t developed yet, or it’s a feature they’ve killed because of some aspect of their business model or a rights issue
(either for Amazon or Apple).
If it’s the latter, that’s a real shame, because the ability to subscribe to magazines and newspapers has huge appeal.  Hopefully someone in the know can leave word in the comments as to the real scoop on this, but in any case, the confused message from the Kindle store at Amazon needs to be fixed.

That aside, having a truly robust book reader for the iPhone is a game-changer for publishers and readers alike.  And for geeky parents like us, it’s one more very potent weapon in our arsenal of educational ways to feed our kids’ imaginations.

Wired: Highly-functional reader with a huge supply of available content.

Tired: Small screen, no magazines or newspapers (yet?).