Today I had the chance to play around with Wizards of the Coast’s newly launched Character Builder. Basically this program helps you make and store D&D characters. Big deal, right? Anyone with four 6-siders, a pencil and a paper can do that. Well, maybe not as easily, or as slickly. Read on.

First thing you should know is that Character Creator only works on XP and Vista, and for Vista you have to download an additional service pack. No news on Mac OS and Linux compatible apps, but don’t hold your breath.

Check out the screen shots after the cut, and click on them if you want to see them full size.

So I launched the program and clicked on the button to create a new character. The first thing you do is choose a race. As you can see, the available races include many non-standard ones. I chose Tiefling, an angst-filled and sardonic race of half-demons. 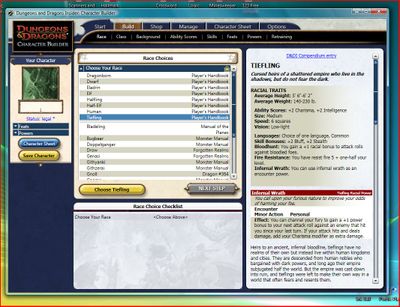 Next, you choose a class. As with race, many semi-official or non-standard races can be chosen. 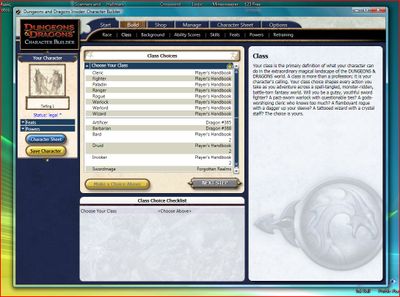 I picked Rogue for my tiefling. When you choose a class, you can also pick what "build" (flavor of that class) you’d like. I wanted a trickster rogue. 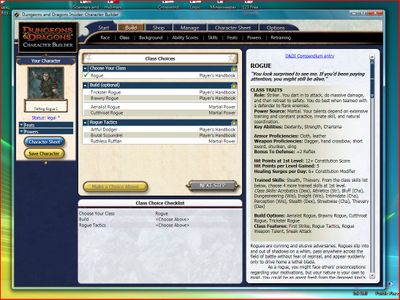 Next you roll up your attributes. You can either build the character up point by point or roll the old fashioned way. You can roll as quickly as you click, so it’s easy to end up with very high attributes. 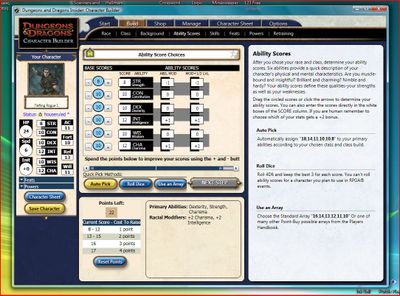 Next, skills. As with the previous choices, Wizards makes it easy for you by only showing you legal choices. Once you make a choice, it quickly moves on to the next category. 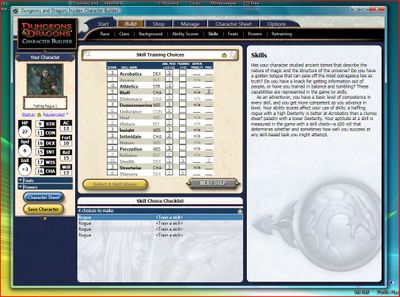 The same with powers, the Character Builder only shows you powers you’re eligible to take. Also, and this applies for previous choices as well, the right-hand column gives you information about the whatever power you’ve highlighted. 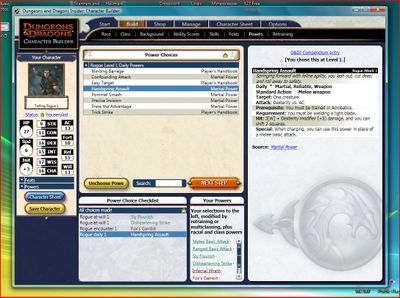 Next, equipment. The power tool on this one is "auto pick" which chooses your equipment for you if you can’t decide how many iron spikes to buy. 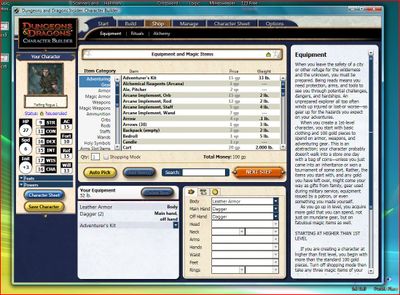 Last, important details like name, gender, age, and so forth. I like how this is the final decision — how often do you evolve your concept of the character throughout the creation process? 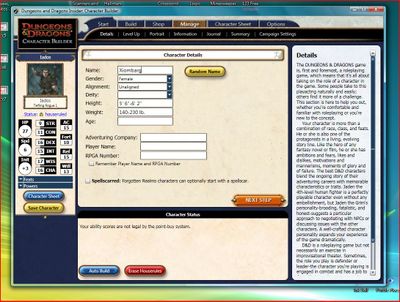 The result: a character sheet! You can print it out duplex every time you play. Not only can’t you lose it, but it can be continually updated as the character gains levels. 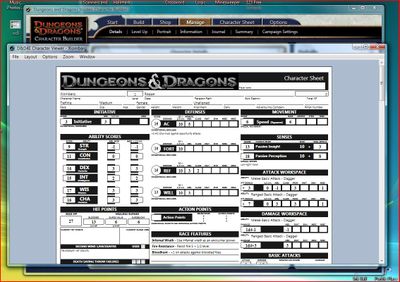 Fine, Character Builder helps you make characters. But there is a tantalizing possibility as well. What would your character look like at 10th or 15th level? What powers would you choose? You can "level up" your PC to whatever you want, in order to visualize how you want him or her to be at that level. Alternatively, DMs could use the program to create NPCs with minimum fuss.

Now for the bad news: the program is free for levels 1-3, but if you want to make advanced characters, you need to fork over some dough. You must be a member of D&D Insider to get the full capability — though currently membership is free, though don’t expect it to stay free forever. Incidentally, Insider membership seems to carry some awesome frills like online access to critical portions of the rules like class and feat details. It’s not a substitute for the rulebooks, but could save your skin if you’re hunting for a particular rule.

I found the Character Builder to be quick to learn, informative, and fun. I suggest you check it out while it’s free!