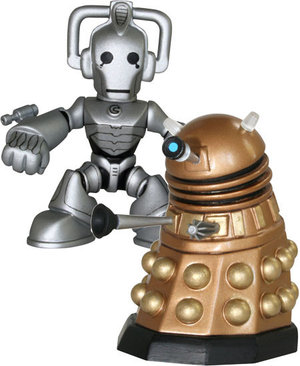 Hasbro’s Star Wars Galactic Heroes minis are versatile little action figures. Their diminutive size and outlandish proportions make them equally suited for dressing up a cubicle or some quality playtime with your own Padawan. They’ve also spawned a positively stunning array of spin-offs, including the Transformers Robot Heroes and Indiana Jones Adventures Heroes toy lines.

This has even lead to a recent influx of imitators. Of particular note is the soon-to-be-released Doctor Who Time Squad series by Underground Toys.

There are 15 detailed figures to collect including characters from Series 1, 2, 3 & 4. You will find the Doctor plus many other familiar characters, enemies and monsters. Each figure is highly detailed and have (sic) different levels of articulation.

There are a number of 2-packs but annoyingly, you are unable to collect all the figures this way:

There are also a number of 5 packs, which contain unique figures:

While not slated for release until February, several online retailers like Forbidden Planet and Entertainment Earth are already taking pre-orders. And though there’s no word on a proper TARDIS collector case in which to store your Ood, Sontarans, and Sycorax, hope springs eternal.

Box of Many Things: A Geeky Monthly Gift Exchange That Anyone Can Join

Fractal Broccoli for the Gardening Geek