Sitting through Quantum of Solace, I was disappointed at the lack of a Q (or R) presence in the movie. Sure, Bond still had great toys to play with, but where were the brains behind them? As a kid – and later as an adult – I loved Bond movies. The guns … the girls … the gadgets! In a series as formulaic as the Bond movies, oftentimes the most exciting part was when Q came into a scene with his impressive arsenal of camouflaged carnage creations and high-tech gadgetry.

The most impressive toys were stars in their own right, getting lots of screen time and playing pivotal roles in helping Bond escape or capture important information. But hidden between the Aston Martins and Rolex Submariners were Q inventions that never made it out of the lab — clever killing conceptions the director used as wallpaper to illustrate the Q branch’s creativity. 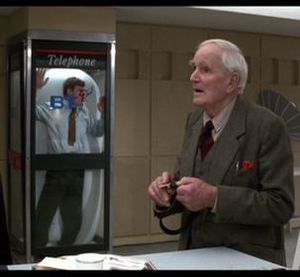 So, as a tribute to the absence of the Q branch’s lab in the last two films, let’s step inside Universal Exports and take a look at the 007 best Q gadgets that never made it out of the lab:

7. Goldeneye – Phone booth trap with airbag. Part of the reason some of these inventions must’ve stayed in the lab was that they were just too cartoony. Can anyone really imagine Goldfinger being trapped in this? (Actually, the idea of that is pretty funny.)

Check out the rest after the jump …

6. Octopussy – Sprung Spike Door. Pity the Q branch mannequins. With a drop of the door knocker, this dummy was diminished to dust as the door slammed open, smashing him against the wall with its many spikes. I need one of these at my house to keep the door-to-door magazine and cookie sales at bay. 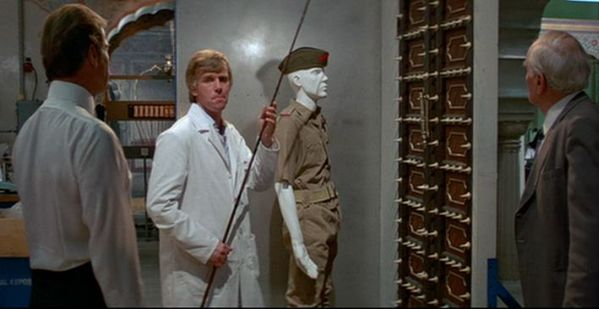 5. On Her Majesty’s Secret Service – Radioactive Lint. Before we ever saw the inside of the Q branch lab, Q appears in M’s office with a box of lint. The lint’s radioactive properties act as a homing device and also are capable of "anti-personnel"
qualities. M is unimpressed. Wouldn’t a sheet of Cling Free defeat this device? 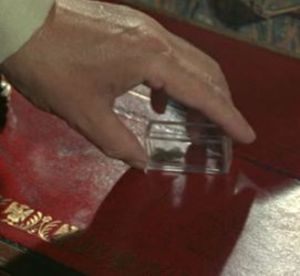 4. The Living Daylights – Rocket Ghetto Blaster. This shoulder carried radio/weapon was being tested for the Americans (which should be obvious by the very stout Q-branch mannequin). This one definitely goes to 11. 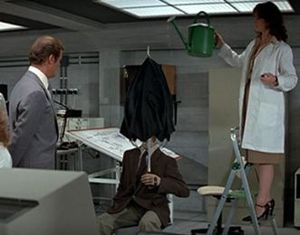 3. For Your Eyes Only – Water Activated Spiked Umbrella. When water hits this open umbrella, spikes shoot out from the end of the umbrella’s ribs and the device closes around the neck of its user. Ouch! 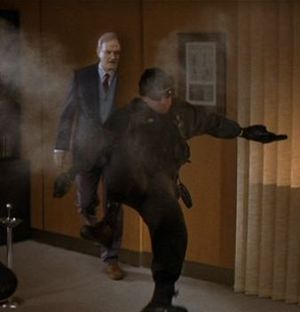 2. Die Another Day – Photo-realistic, 3-D Virtual Reality Training Simulation. What’s this? Bad guys have taken over MI6 headquarters? M has been taken hostage? Bond shoots her? Nope, as R emerges from behind a wall, it’s just a VR training exercise … albeit a very realistic one. (After this scene, R & Bond step into an old storeroom teeming with old mission gadgets — the jet pack from Thunderball, the crocodile dummy from Octopussy, the dagger shoe that was in From Russia with Love …) 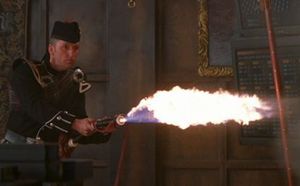 1. The World Is Not Enough – Bagpipes with Automatic Rifle and Flamethrower. Really — what could be more appropriate, in terms of deceptive British weaponry? One minute you’re playing Scotland the Brave, the next you’re punishing a group of tourists who’ve stepped way too close to the crown jewels. In his last film, Q really outdid himself.

So what do you think? Did we miss a great Bond gadget? Do you miss Q (or R)? Let us know in the comments.

Vote for GeekDad to Get a MacArthur Foundation Grant