With a family and life and the stress of the end of the year holidays building, sleep can sometimes be a precious commodity – particularly if you’ve got young ones at home that haven’t (yet) mastered the art of sleeping through the night.  Several weeks ago, I got an evaluation copy of Pzizz to take for a spin.  I tried it out for the family perspective, and put it through its paces at both home and abroad.

Pzizz was getting a lot of buzz last year – Wired’s Michael Calore tried it out and reported on it last summer. He described it as:

binaural beat generation. Two slightly varying tone frequencies are played simultaneously, one in each ear. The out-of-sync peaks of the sound waves produce a pulse below the range of human hearing. Even though the pulse is inaudible, the effect is said by proponents to calm brain activity and quiet the mind. 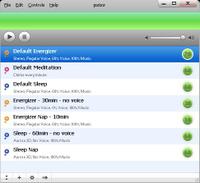 That’s pretty technical stuff…  Taking a purely NON-technical approach, I wondered if it would work at home in those weird times that Moms and Dads find themselves in – up at a strange hour due to a sick child, wanting to grab a quick nap during that precious hour in the afternoon when the little one(s) is(are) down for their own nap, and while traveling… (because I know my entire family sleeps better in their own beds) rather than in a hotel room or distant family bed.

Pzizz comes with two modes: Sleep and Energizer Nap.  One to help settle you in for the night and the other to grab a quick nap during the day.  Each style of nap uses different ambient noise and music to help create this binaural beat generation – from crashing waves, wind chimes, chirping birds, and a man’s voice offering suggestions on how to relax.

I tried it on myself at home – primarily with the Sleep settings.  I found the voice of the guy speaking a bit creepy, so I customized a sleep nap with his voice eliminated.  It produced a sleep nap of ambient noise and relaxing music sans the creepy voice.  I did also try the Energizer nap – on the weekends – and pulled out the voice there as well. 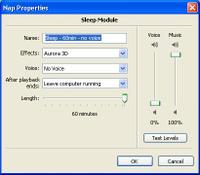 Pzizz allows you to highly customize different aspects of the nap files – selecting a length from as few as 15 minutes to as many as 60, with or without the voice, the mix of voice/music volume, and (if playing from your computer) what the computer should do when the track is done…shut down, hibernate, or go to power-saving mode.  You can also generate and export nap files to MP3 format and have them auto-added to an iTunes playlist if you want.

Pzizz’s offering to auto-load into an iTunes playlist…on the surface, this seemed helpful so I did it.  I found out the next day, however, that I had to go into the meta-data of the nap MP3 files to stop them from showing up in the shuffle.  This had to be repeated each time I changed out the nap files. 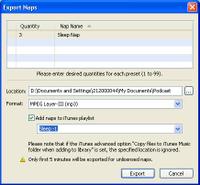 The other thing I found was that I had to create separate playlists if I imported both Energizer and Sleep naps – one night I got woken up as the alarm at the end of an Energizer Nap beeped at me – no fun at 2:30am. This had to be immediately changed the next day to avoid a repeat…

Perhaps a future release of Pzizz should allow you to import your files as a Podcast (instead of a playlist) – this way the nap files are out of the music shuffle, and you can play just the file you want (and not get woken up when you aren’t planning it).

So after several weeks of experimenting, did it help?  I’d say mixed results.

However, traveling to England with a six-hour time change, and not sleeping in my own bed, I would lean to the no category.  There were several times I found myself staring at the ceiling thirty-five or forty-five minutes into an hour-long Sleep nap file
—
@page { size: 8.5in 11in; margin: 0.79in }
P { margin-bottom: 0.08in }
–&amp;amp;amp;gt;

Admittedly, I did not try out several Energizer nap files (my days and weekends just don’t allow it). However, stay at home parents may find the Energizer module exactly what they need during the few precious moments their kids are asleep – provided they don’t have tons of chores they need to complete or catch up on in said few precious moments…

Wired: the custom settings to craft the perfect ambient setting nap for you.
Tired: having to manually change the iTunes meta-data for each upload and having to separate Energizer and Sleep Naps into different playlists.