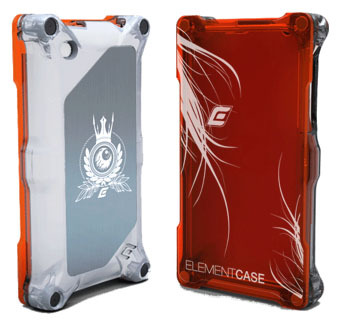 iPhones are pretty dang tough, but in the end, they’re just glass, paper-thin metal, and plastic. And with most iPhone cases offering a dull appearance and mediocre protection, there’s a clear demand for a case with looks and strength. But attractive isn’t enough — you want one that reflects your personal style. You want a case that can be laser etched with a design you create.

Enter the Element Case, a customizable hardshell for your iPhone that protects the goods while looking good. There are two main models: Alloy, machined out of aluminum and meant solely for the 1st generation iPhone, and Liquid, a lighter case built out of high impact polymer that fits both the original and 3G iPhones.

While these cases fit snugly, seem very tough and do look good, what really sets the Element Case apart is their flip lid. A translucent plastic plate covers the front. One would imagine the face plate would flip or slide, but instead it simply pops off — it’s magnetic, and four little button magnets allow the plate to be stored on the back of the case. (Also permitting you to shoot pix through the faceplate for a cool filter effect!) If you need to answer the phone or dial out, you have to remove the flip lid. While inconvenient at times, the plastic of the lid does offer another layer of protection for the phone when it’s not in use.

The inventor of the Element Case, Jeff Sasaki got his start as an industrial designer, creating protective motorcycle gear. After losing six phones (including two iPhones) to a variety of accidents (including four chewed by his dog Sprocket) he resolved to create an iPhone case tough enough to withstand this punishment. Founded in 2007, the company officially debuted this year. Currently operating as a startup, Element is seeking funds to enter mass production.

One of the best aspects of the Element Case is the ability to customize it. The company’s website shows scenes of deejays, tattooed hipsters and snowboarders, along with BMX, dirt bike and 555 racers. However, I think the case has a broader appeal than just the xXx crowd. Most people with iPhones have noticed that this very fabulous phone looks the same as everyone else’s iPhone. Element offers a variety of case colors and materials, along with several colors of flip lids. In addition, you can choose from a number of stock designs which are laser-cut onto the case and/or face plate.

As an added bonus, you can email the company a design or logo and they will laser it onto the case or flip lid for $25 per suface, though more complex and difficult designs can increase the price. In my test drive, I used the company’s template to create a design in Adobe Illustrator, emailed it off, and the next day there was a cool case on my doorstep! Check out the magic in the photo below:

Using the Element Case for about a week, I’m really impressed with the case’s toughness and looks. I know it’s really shallow, but was fun having people check it out and admire it. Everyone thought it was awesome. It’s cool having the option to swap out various flip lids, and you’ll probably want to get extras. At $19, the face plates aren’t cheap, though once they enter production you’re likely to see that price drop.

Speaking of the flip lid, I did have one concern about it. While very sweet, I question how easily it could be removed in a hurry — say, if someone called you in the car. One supposes you could plan ahead by using a Bluetooth (which you should be doing anyway when driving) or by storing the faceplate on the back. Nevertheless, you may not always remember and I gotta say it would be safer to not answer your call than try to steer with your knee while juggling the phone. This was my only concern about the Element Case — I didn’t notice any problems with the magnets near the phone nor the aluminum Alloy case interfering with the signal.

Check out Element’s full line at their website, ElementCase.com.

(Note, we will be giving away GeekDad-branded Element Cases in upcoming contests, so stay tuned!)

Yummy and Apparitiony! Learn How to Make Your Own Ecto-Cooler

Lego Spaceship Designs From A to Z (GeekDad Weekly Rewind)