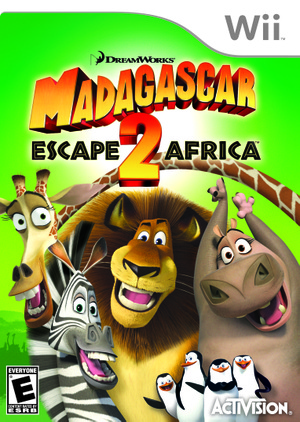 The videogame based on Madagascar: Escape 2 Africa is the first movie tie-in game I’ve played that would actually be fun to play even if weren’t based on a movie. So often movie-based games seem only to exist because every kids’ movie and action movie has to have a videogame, and you can tell they were rushed to market because they’re barely playable. This one, fortunately, doesn’t fit that mold.

There are two ways to play the game: play the story, or go straight for the mini-games. The story starts before the movie does—spending an entire (tutorial) section on preparations for the flight from Madagascar, whereas the movie starts with the plane about to take off. There are quite a few mini-games, all of which (I believe) are incorporated into the game and also available from an "arcade" selection on the game’s main menu. The story game is single-player (with multiple saved games available, so several people can play separately), and includes a lot of basic platforming and puzzle-solving, but also some very creative bits involving the movie’s main characters—from Marty the zebra having to kick suitcases into cargo containers to Melman the giraffe rolling a spherical boulder back and forth to squash scorpions and knock other boulders to cover steam vents. The penguins are handled very well, with a lot of derring-do to find things to repair the plane—I was laughing at both the game and the cut scenes. 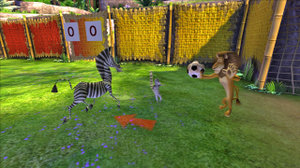 Playing the mini-games from the "arcade" offers the ability to play them in multiplayer mode. My kids and I have had an absolute blast playing diving, soccer, mini golf, and several others. The arcade also offers a Tournament Mode which allows you to play several randomly-picked games head-to-head. The mini-games, like the tutorial section of the story game, are narrated by Julien the lemur. This is usually a lot of fun, but I must say does get a bit annoying (at least for this adult). And some of the things he says are needlessly negative—for example, if you get a bogey in mini golf, he will sometimes tell you that that’s "not good" in a chastising tone. This isn’t a huge deal, but in a game aimed at kids, I don’t understand why they would make it sound like the player did something wrong.

Now, I played the game on the Wii, which is of course noted more for its gameplay than its graphics, but I was a bit disappointed at some of the rendering. The cut scenes looked about as crisp as the movie did on the big screen, but the game had occasional blipping and I was annoyed by the "camera" failing to move logically in many cases. It is really annoying to play a penguin trying to fight a lizard, and to lose a life because your view of the lizard is blocked by a cargo crate. Too often in the game you have to adjust the view manually so you can see what you’re doing, both in the story and in the miniature golf mini-game.
There are also times when you do this, but you end up getting blocked by, say, a plant—why the game doesn’t make the plant temporarily invisible automatically, I can’t imagine. 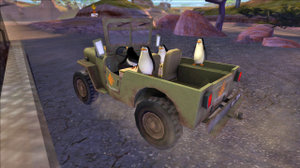 That, and the fact that none of the chief voice talent from the movie reprised their roles for the game (though the guy who did Marty’s voice sounds remarkably like Chris Rock), are my only complaints. For a game aimed mainly at kids, it’s a fair bit of fun for adults. And most kids will probably really enjoy it—my six-year-old daughter loves it, though she mostly likes the mini-games and not so much the story; my son, who’s nearly eight, likes the whole game. They both needed a fair bit of practice to get good at the mini-games, which was occasionally frustrating for them, but I consider that a plus, because too often in videogames such as this the mini-games are so easy most kids don’t bother playing them more than a few times.

I can’t speak for the other versions, but the Wii version did make excellent use of the platform’s peculiar controls. The Wii remote is used for targeting by pointing at the screen in several scenes, and in the diving mini-game you must shake it back and forth to twist in midair. There are other cases where there are ways to play a scene or a mini-game with Wii remote motions or with buttons, allowing you to choose which you’d rather do. 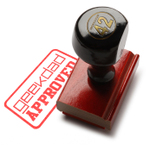 for between $19.99 to about
$49.99 retail price. It’s rated E to E10+ depending on the platform, but the violence is so cartoony and the suggestiveness is so understated, I have to think the only reason anyone would rate it
E10+ is for "simulated gambling," which refers to a slot-machine game.
It’s your call if that bothers you for your kids, of course, but it seemed pretty benign to me. Highly recommended, but not without minor annoyances.

Tired: Camera trouble; none of the movie’s voice actors. 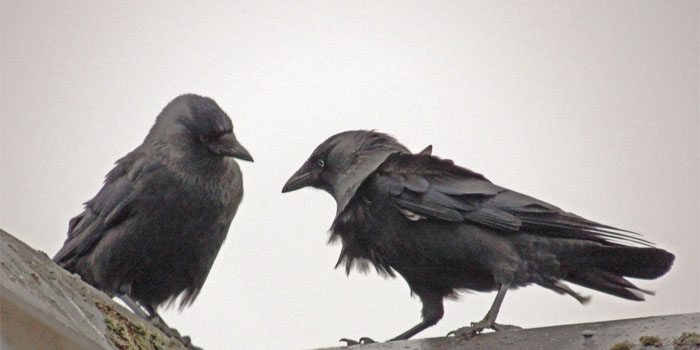