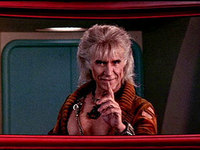 Ricardo Montalban turns 88 today. The star of many geeky movies, GeekDads will of course know him from his one appearance in Star Trek: TOS as Khan Noonien Singh. He reprised that role in Star Trek II: The Wrath of Khan, arguably the best Star Trek movie.

But Montalban has many other credits. Now wheelchair-bound due to an old spinal injury, he continues to work, including a recent stint as Senor Senior Sr. on Kim Possible, as the grandfather on Spy Kids 2 and 3, and voice work as himself on a hilarious 2007 SuperBowl commercial.

So raise a toast to the former Mr. Roarke today while you turn up your speakers and play back this classic clip. And if you’ve seen the movie but you’ve never seen the original, you’re missing one of the best TOS episodes. Grab it on iTunes or watch it online and enjoy Montalban in his prime.

A Google-a-Day Puzzle for August 31