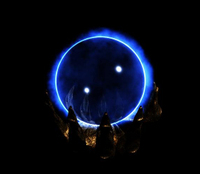 A GeekDad salute to Simeon Bradshaw whose correct answer to this week’s puzzle wins a $50 gift code to ThinkGeek! (And props to many others and their mad SketchUp skillz!) All readers who check out the solution after the jump and receive a gift code for $10 off of your next ThinkGeek purchase of $30 or more.

Little Xerxes awoke in the middle of the night and his brother Yervant asked him what was wrong.

"I had that really weird dream again," he said. "I was shown the glowing Orb of Yazoom, and told that it would bestow wisdom and genius to any who possess it. But the orb was sitting directly ahead of me atop a pillar in the center of a deep square pit. I couldn’t reach it but I knew I had to have it."

"I had nothing with me, no tools, no equipment, or anything. There is nothing around me except for six wooden planks I knew measured 16
feet by 16 inches by 2 inches each. The pit’s sides though are 40 feet long and I calculate the distance from the middle of a side to the pillar to be little more than 19 feet. I sit in despair at the edge of the pit, unable to come up with any way to get the orb. Then I wake up.
[sigh]"

Yervant, who is tired of listening to yet another story of Xerxes’
dream of pits and magic orbs tells him: "Fer cryin’ out loud, I’ll tell you how to get the stupid ball so we can both sleep in peace!"

What does Yervant say? How does Xerxes get the Yazoom Orb?

Yervant tells Xerxes: "Each plank is too short to use by themselves so you need to use them together. The pit’s diagonal is a little more than 56 feet which makes the distance from the corner to the pillar holding the orb about 28 feet. Lay one plank diagonally across the corner making a right isosceles triangle. The plank is the hypotenuse and is thus 8 feet from the center of the hypotenuse to the corner of the pit. It is still 20 feet to the pillar. Continue laying two more planks over the obtuse angles created by the plank/hypotenuse and the edge of the pit. Lay a fourth plank parallel to the first with its ends on the second and third planks. The distance from the center of the fourth plank to the pillar is now under 16 feet. Lay a fifth plank perpendicular to the fourth to the pillar and the sixth plank from the corner of the pit to the fourth continuing the diagonal. Here, let me draw a picture: 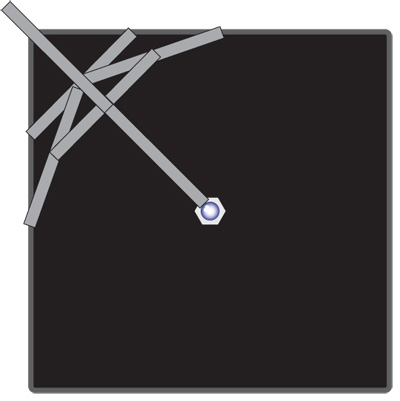 You walk out, pick up the orb, and be careful not to drop it on the way back. Now go back to sleep."

NOTE: You can easily do without the sixth plank and the assembly will still solve the problem. The sixth allows you to traverse the assembly more easily. Several solutions also proposed a similar, equally viable  arrangement that involved creating isosceles triangles at opposing corners of one side and layering the planks in similar fashion to shorten the distance. While it should work, the greater distance spread across 40 feet of a pit side might make the assembly a bit less sturdy than the solution pictured. Another possible solution brings back all the memories of weaving popsicle sticks into tight, throwable exploding weapons of pain. While the "weave" solution will work, it is unlikely one person can achieve such an assembly with planks 2 inches thick.

Coupon code GEEKPUZZLE will get you $10 off of you next purchase of $30 or more at ThinkGeek.