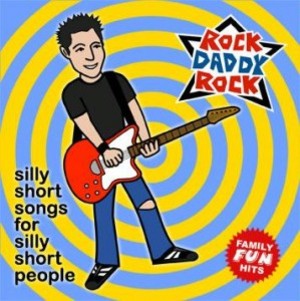 Under the guise of Rock Daddy Rock, Chris Bihuniak writes the songs that kids want to hear. On his full-length solo debut silly short songs for silly short people, he stalks the thematic grounds of children’s music where others fear to tread with tracks about boogers, farts, and warts, thus ably engaging the knee-high portion of his musical audience.

But there is likewise another side to both Rock Daddy Rock and silly short songs in that the project manages to inject the voice of the genuinely interested, genuinely interesting parent. Chris is the father of four young sons – who serve, it must be noted, as both his inspiration and his occasional backup singers – and the dynamic relationship between father and sons is the true power of Rock Daddy Rock.

Originally a series of simple poems written to amuse his kids, the 18 tracks of silly short songs were put to music to great effect by staying true to the edict of the album’s title: keeping things short and silly. The tracks themselves are catchy one to two minute numbers that float from rock to pop to rap to punk. They rely heavily on uncomplicated lyrics and straightforward, if sometimes repetitious, instrumentation. Still, with even the longer songs falling well short of the length of your typical pop radio ditty, this occasional repetition never becomes grating.

The dualistic parent friendly but still kid friendly nature of the release also makes for an interesting listening experience. For every "Where is the Bathroom?" or "Don’t Pass the Gas" that will surely elicit a fit of giggles from your geeklings, there is a song like "The Lecture" or "Because I Care" that can’t help but come across as warm and heartfelt to parents. Perhaps the album’s most important element is that though the songs themselves often tackle well-worn topics like not hitting, eating your vegetables, and cleaning your room, they do so without ever devolving into didactic sermons or outright damnation of bad behavior.

The album also manages to break some new ground by staying explicitly personal to Chris’s own experiences as a father. An excellent example is the song "Diaper," which reflects on the shear terror of being left alone with a new baby for the first time without ever losing Rock Daddy Rock’s trademark sense of humor. And even tracks like "Gun (Peace Sign)," which examines the tendency of young boys to turn any handy object into a pretend gun, ably walks the fine line between useful insight and outright cheesiness by relating personal insights as opposed to dispensing heavy-handed advice.

In the end, silly short songs is an 18-track meditation on the fun of raising young boys that may occasionally sugarcoat this endeavor’s frustrations but refuses to simply whitewash over them. It’s a rocked up celebration of the wonderful, whimsical, wholly disgusting trappings of childhood wrapped in a lo-fi and imminently approachable musical package. Moreover, it’s the latest addition to the GeekDad collection of children’s music that doesn’t suck.

You can learn more about Rock Daddy Rock and check out the album at the official web site, but, before you go, how about a contest?

Chris was nice enough to set aside 2 free copies of silly short songs for silly short people for a pair of lucky GeekDad readers. Simply add a comment to this post to enter, and two winners will be chosen at random next Wednesday, October 29th. Please be sure to include a functional email address in the relevant field so we can contact you should you win, and, until then, keep on rockin’.