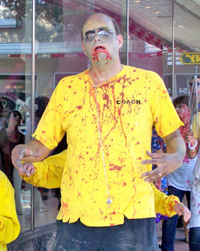 Happy Halloween to monster scorekeeper Marcelo who receives a $50 gift code to ThinkGeek! Thanks to all who submitted answers. Check out the solution after the jump for your $10 off code.

Every Halloween season, the monsters gather for a soccer tournament.
This year the Vampires, the Zombies, and the Werewolves play each other in a series of matches. The prize to the winner: a buffet of captured humans that will delight any of the teams’ particular tastes.

Unfortunately, the scorekeeper, a ghoul named Fred, completely botched the results of the tournament. All that could be read was as follows:

One particularly intelligent zombie named Ralph examined the results and said: "At least reading what’s here, if you knew the total number of goals scored by the Vampires, you would be able to fill in the table and find the score in every match."

Complete the table, find the scores of each match and the winner of the tournament.

The chart is then completed as follows

Fred is dispatched in a most extreme and violent manner and the Vampires enjoy the spoils of their win with voracious enthusiasm!

Coupon code GEEKPUZZLE will get you $10 off of your next purchase of $30 or more at ThinkGeek. Happy Halloween!