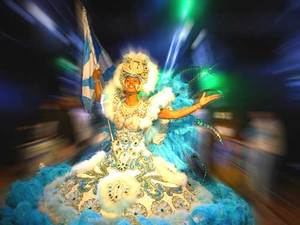 I’ve always had a weak spot for "rhythm action" games. From strutting my Dance Dance Revolution moves or tapping through Elite Beat Agents on my DS to getting down with some Rock Band and Guitar Hero songs, there is something about these games I simply love.

Even more than the simplicity of their play or their bright, happy visuals, these games manage to trick me (the least musical man I know) into feeling like I am creating music. Having been excluded from the music creation fun for my juvenile years, I’m now able to play along with the best of them.

My most recent discovery has been Samba de Amigo for the Nintendo Wii, which, almost miraculously, was able to uncover a modicum of syncopation that I didn’t know I had. The game turns your Wii-mote into a virtual maraca — a brilliant use of the controller.

Here’s my parents’ guide to give you the lowdown on this game: 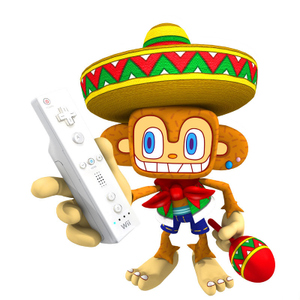 Samba de Amigo is a classic arcade hit from the late ’90s. The game featured novel maraca controllers that enabled the player to shake along with the music to score points. Since then, rhythm action games have had quite a journey, both in public arcades and on home consoles.

Here, Sega brings their much desired game to the Wii, replacing the maracas with the Wii-mote and Nun-chuck.

What Sort of Game Is This?
Rhythm action games combine the enjoyment that comes from creating music with the challenge of videogame scoring. The player is usually tasked with dancing on a mat, tapping a touchscreen, pressing a button, singing into a mic or strumming a fake guitar controller in time with the music.

What Does This Game Add to the Genre?
Samba de Amigo‘s gesture controls were revolutionary when it was launched in arcades and on the Sega Dreamcast. Even in the days of Wii-motes and Nun-chucks it is a rarity to find a rhythm action game that makes good use of movement (Boogie Wii and Eyetoy PS2 being some notable exceptions). The simple fact is that it is a tall order to get the technology to work consistently enough for the accurate demands of making music. Wii-Music shows that even Nintendo’s own developers had to take a looser play-along style, rather than a direct one-to-one control.

In Samba de Amigo, the player uses the Wii-mote and Nun-chuck as they would a pair of maracas. Each track tasks them with making specific down/up and left/right movements in time with the musical markers. This works pretty well and allows two players to play with or against each other without the need for expensive additional peripherals. The best experience, though, is had by one player using two Wii-motes. The absence of the tethering cable and (the perceived) increased sensitivity of the Wii-motes enables more accurate controls and subsequently higher scores — and, of course, more fun.

The game continues its Mexican carnival theme throughout, both graphics and music being styled appropriately. Popular songs (both classic and modern) are rendered in the Calypso carnival style to make them suitable for the maraca percussion. Included in the mix are "Are you Gonna be my Girl" (Jet), "I Want Candy" (Bow Wow Wow) and the party pleasing "Mambo Mambo" (Lou Bega).

Although this all stays true to the original game, players may sense that rhythm-action games have moved on somewhat in the intervening years. Games like Rockband 360 and Elite Beat Agents DS can make Sega’s originally ground-breaking game look a little tired.

What Do People Play This Game to Experience?
Samba de Amigo is a success because it gets players having fun, shaking the virtual maracas with increasing accuracy. Pulling together a string of on-beat maraca hits is no mean feat and, when achieved, gives players a real buzz. Players returning to the game, having played it in the ’90s, will not only enjoy the action, but appreciate how lovingly the game has been brought to the Wii.

How Much Free Time Is Required to Play It?
As with other rhythm action games, you need to allow yourself a good hour for acclimatization. It simply takes a while to get used to the nuances (and foibles) of the gesture controls.

Once you are up to speed, a single song can be completed in just a few minutes. Players are likely to pull this game out as an after-dinner activity — here, it can easily soak up an hour or so.

What Factors Impact on Suitability for Novice/Expert, Young/Old Players?
Younger players — although they will have fun shaking the controllers along with the music — will struggle with the exacting demands of the game’s timing.

Intermediate players are probably best placed to get most value here. The degree of perseverance required soon gives way to enjoyment as accuracy and scores improve. Although this is different from Guitar Hero and Rockband 360, where mistime buttons cause the music to clank and grind — here you simple lose out on score multipliers.

Experts will either revel in revisiting a classic game, or berate developers who have done little to update the title to compete with modern equivalents.