It’s easy to find geeky characters in geeky movies. Here, then, is our list of the ten best characters who we think qualify as geeks, but who appear in movies aimed at (and popular with) the general public, not primarily at geeks. 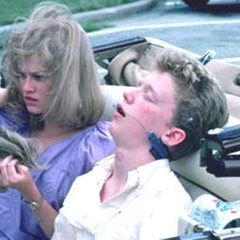 1. The Geek from Sixteen Candles – Yeah, it’s kind of a gimme. I mean, the character is officially billed as "The Geek," and he was played by Anthony Michael Hall, who at that point in his career was pretty much playing only geeks and nerds, and this was really his first such role. He gave some serious, if probably unrealistic, hope to geeks in the ’80s, by ending up with the prom queen.

2. "Doc" Emmett Brown from the Back to the Future movies – He’s an exaggerated geek, of course, as only Christopher Lloyd could play. And he mispronounces "gigawatt," which geeks everywhere cringed at when the first movie came out. But his excitement about his inventions, his habit of naming his dogs after famous scientists, and the way he obsessively builds models in parts I and III, prove his geekiness even if no other evidence existed. He had to be on this list, especially since he ends up as a geek dad himself, even naming his sons "Jules" and "Verne." 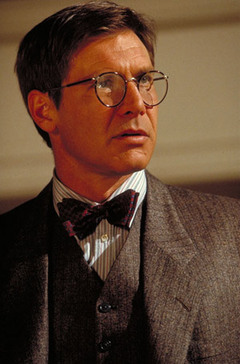 3. Lloyd Dobler from Say Anything… – He’s not the traditional geek, and I’m sure some people will claim he’s not a geek at all. But I identified with him because he’s an outsider, and a sensitive guy, and he admires brains more than anything else. I’d argue that he’d be more of the classic geek if he weren’t written as an underachiever, and yeah, he kickboxes, but really, if you’re going to do sports, that’s about as nonconformist as it gets.

4. Indiana Jones – Obviously he’s a geek who’s not afraid to get his hands dirty. But he’s a college professor, he donates everything he finds to a museum, and he does pretty much everything in an unconventional way. He’s the geekiest action hero there is.

5. Belle from Beauty and the Beast – She has to be one of the top two or three smartest main characters in any Disney animated movie, male or female. She loves books more than anything, helps her father with his inventions, and can’t stand the boorish Gaston who’s handsome but stupid. The sheer joy she feels when the Beast gives her his library is so pure you can feel it, and she falls in love with the Beast despite his appearance. Plus, she’s only momentarily fazed by the talking candlestick, clock, dishware, and furniture. It makes one wonder if the producers of "Beauty and the Geek" realized their unintentional irony. 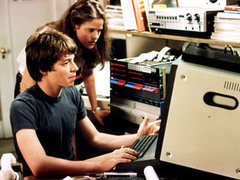 6. David Lightman from WarGames – I don’t think this one needs much justification, seeing as how he’s a hacker, and a great character. I’m sure some might claim the movie isn’t mainstream enough to belong on this list, but I remember when it came out, and it was popular enough that most people who saw it didn’t realize how preposterous most of the plot really was.

7. Gordie Lachance from Stand by Me – If you’ve seen the film you know what I mean. He’s a writer and a storyteller. He’s very sensitive and doesn’t like confrontations, which is why when at the end of the movie he pulls a gun on Ace you know how strongly he feels about what he’s doing. 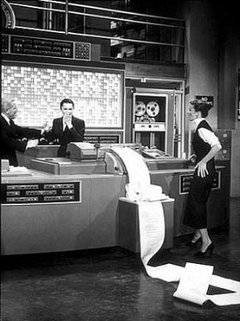 8. Richard Sumner from Desk Set – It’s not a movie everyone reading this will have seen, but it’s such a great film I had to include it. Spencer Tracy’s Sumner is the developer of a new computer that a group of researchers, led by Katharine Hepburn’s character, is afraid will replace them. He loves his computer (which, since the movie came out in 1957, is huge) more than any human being (until, of course, he falls in love with Hepburn’s character), and in one scene sits down in the middle of the library to read a stack of books. If you haven’t seen the movie, you should—it’s great fun, with great acting, and the computer is really amusing to those of under 60.

9. Matt Farrell from Live Free or Die Hard – Yeah, he’s a bit of a cardboard cutout of a hacker, but he’s a lot of fun and works well with John McClane. And without him, there would’ve been no awesome cameo from Kevin Smith. It may be a bit of a stretch to call him a great character, but it’s so cool to see a geek help Bruce Willis save the day that he belongs on the list anyway.

10. Andy Dufresne from The Shawshank Redemption – He enjoys being a banker, loves to read, and broadcasts Mozart throughout the prison. He even carves chess pieces and puts up a poster from One Million Years B.C.
It’s really his geekiness that saves him, since it gets him the job working for the warden, and probably the brains to come up with his plan in the first place.