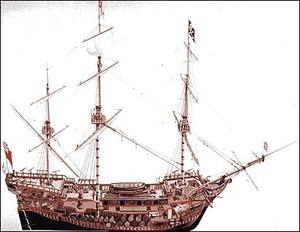 Arrrrr! It be Pirate Week, and we’re casting off with a cargo hold full of pirate websites, including online pirate games, pirate name generators, and links to information on real-life pirates. Among them was John  King, 11 years old and a member of the crew of the Whydah, a slaving ship turned pirate vessel, sunk off the coast of Cape Cod.

The Boston Globe wrote about the discovery of the Whydah and her archeological treasure:

He was a boy, no more than 11, when pirates captured the ship he and his mother were sailing on in the Caribbean. As he watched the pirates haul off the ship’s cargo of sugar and tobacco, John King made a decision: He would leave his mother and join the pirate crew, led by
Captain Sam Bellamy.

Now, 290 years later, King’s remains — his fibula, silk stocking, and shoe — have been identified among the wreck of Bellamy’s ship, the Whydah, 1,500 feet off the coast of Wellfleet.
While teenage pirates were common in the 18th century, King is considered to be the youngest ever identified.

Their find opened a window onto the strange and brief life of a young boy swept up in a lost world of ocean piracy.

“It’s a whole touchstone to a period in history which is often misunderstood or it’s been twisted around by all these novels," said Ken Kinkor, a historian at the Expedition Whydah Sea-Lab and Learning Center in
Provincetown, which made the discovery. “Even though we find treasures, the best treasures aren’t always gold or silver. It’s the knowledge we get from the past."

Kathy Ceceri is the author of Around The World Crafts: Great Activities for Kids who Like History, Math, Art, Science and More!