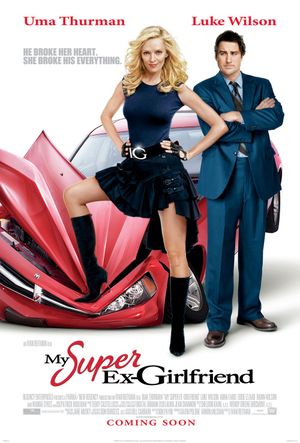 A friend of mine recommended this video to me.  I was leery at first.  I generally don’t like super-hero spoofs.  I can count on one hand the number of them that are actually made well, and even fewer that seem to be made by people who know anything about the genre.  Of all of them, the only one I really like is "Mystery Men".

"Maybe he takes them off when they transform."

"Then he wouldn’t be able to see!"

Classic.  What was I talking about?  Oh right, "My Super Ex-Girlfriend".  While this flick did not really knock me over with any geek-cred, it was entertaining and basically fun.  Honestly, any film that includes Luke Wilson, Uma Thurman, Anna Faris, Rainn Wilson, and Eddie Izzard is worth your time.  And if the Lesser Wayans’ "Scary Movie" franchise makes you averse to Anna Faris, see this movie so you can see her in a nice, likable role.

The story features a likeable guy Matt Saunders (Wilson) who asks out a woman he meets on the subway.  Her name is Jenny Johnson, and Matt is somehow surprised when he finds out she is a super-hero named G-Girl.  I’m not making that up.  She’s called "G-Girl".  Anyway, G-Girl as it turns out is a complete head-case of a girlfriend.  Just imagine all of the horrible head-case girlfriends you’ve had, or heard of, and then give those self-same women super-human powers.  Yeah, it’s that bad.  Rainn Wilson play’s Matt’s friend who gives him all the advice our male friends give us when we’re having troubles in our relationships.  Yeah, it’s that bad.

Around this time, Wilson’s character is approached by G-Girl’s nemesis, Professor Bedlam (Izzard).  At first, Matt demures, but when she throws his car into orbit, he reconsiders.  Don’t mess with the ride, ladies.  Long story short: Matt winds up with Hanna (Faris), G-Girl winds up with Bedlam (I’m not making that up!), and everyone lives happily ever after.  More or less…

And now for the breakdown…

Sex: well, there is some sex.  My daughter is 12.  The friend who recommended this to me has three step-kids, and they are all older than her.  In the film’s defense I will say that the sex is intended to be comedic, and not erotic or raunchy.  Let’s just say that Luke Wilson’s character is introduced to a PG-13, male-version of Niven’s "Man of Steel, Woman of Kleenex"…  When you are done cringing, you may continue reading…  There are also many verbal references to sexual situations that most of you will not consider appropriate for the pre-pre-teen and younger crowd.  Luke Wilson’s bare buttocks also make a brief debut.

Violence: the violence in this film is very low-key.  It would pass as G-rated by itself.

Values: Mrs. Geek and I both felt that the film was more than a little sexist.  G-Girl, who is supposed to be a protector of the world, a hero on par with Superman or Spider-Man, displays a level of pettiness and neuroticism well below that station.  We all know that if Lois left Clark — or when Mary Jane left Peter — that neither of them would behave towards their ex-es the way G-Girl does towards Matt.  While this is presented to us as a result of the pressures of being in such a position, it does seem that a woman such as Jenny/G-Girl is not able to handle the stress of the job the way a milksop — but still male — person like Peter Parker is.  Despite the fact that she uses her powers to protect the Earth, G-Girl is no-one’s idea of a good person.

It was funny, but little kids shouldn’t watch it.