This is it for us.  The final couple days of summer vacation, and the dog days of summer are firmly entrenched…really meaning that the kids are struggling with boredom.  The video games have been mastered, the TV shows are old, and with a bunch of people taking last-minute vacations this weekend there aren’t a lot of kids around the neighborhood right now.  This doesn’t mean, however, that they haven’t gotten creative – especially since our response to “I’m bored” is “Ok. Find something to do.”

Boredom is something a GeekDad made a case for last year, and this year we continue the tradition, believing that creativity is spurred on through boredom.  There have been three specific ways our kids have entertained themselves the last few days that have been priceless –
human foosball, balloon basketball, and cardboard hideaways.

Cardboard Hideaway:  a collaborative project over a couple of days.  Using some of the old boxes from our recent move, lots and lots of tape, and a pair of scissors, the kids have come up with this beauty: 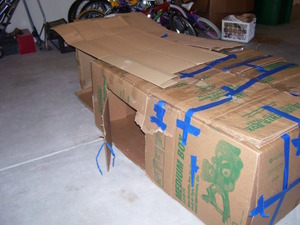 It contains three separate compartments with doors to each and a small covered patio.  They’ve crafted locks for their doors when they aren’t there.

Balloon basketball: something our youngest two came up with early in the morning when they wanted to play something but the older siblings were asleep.  So, they took a small rectangular storage bucket, removed the lid and blew up a balloon.  The object of the game was to be at the bottom of the stairs and get the balloon in the bucket.  They started at the lowest step and when they had mastered it, they’d move the bucket one step higher and repeat the process.  I figured they were learning physics without even knowing what the word means.  Because once they could no longer throw the balloon accurately, they found that with a quick snap at a certain trajectory the balloon made it to the higher steps.

Human foosball:  we have an area of the house with wood floors and open doorways on either side of the room.  Staying on the floor and only being able to face the door that was their “goal” they used tennis balls (which had to stay on the ground) as their foosball.  The game was made more challenging with the dogs who wanted in on the game, only the canine version involved grabbing a tennis ball and running into another room of the house.  It eventually got to the point of needing nearly four tennis balls in play at any one time to keep the dogs occupied and still have enough to try to score a goal.

So, the kids are managing to get creative in an attempt to fill their time in the final days of summer break.  I think they’ve done a decent job, and we’ve got some great examples for them for next summer.

The Legion of Super-Groomsmen (GeekDad POTD)