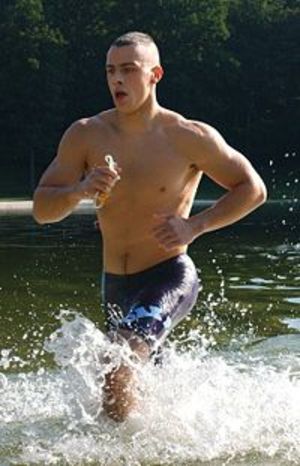 Among geeks, fitness can be a touchy subject. Or perhaps more often an ignored subject. Not that there aren’t fitness geeks out there, but let’s be honest — the stereotype of geeks as fat, or at least flabby, isn’t as far from the truth as we might like it to be.

I should know. Coming into this year, I weighed in at 245, mostly due to the "geek" aspect of my life. A tendency to un-strenuous forms of entertainment, combined with a desk job that, the written requirement that I be able to lift a minimum of 50 pounds notwithstanding, isn’t physically demanding, had given me a profile that was becoming disturbingly convex.

I took a long, hard look at myself, then thought about what I want to see my little girl accomplish, and calculated how likely my current trajectory was to carry me as far as I want to go in this world. The picture wasn’t pretty — I’d like to see my kid get married, at the least, and I figured that on this course, I’d be lucky to see her graduate high school.

I decided it was time to take action.

As any good geek would, I started with the Web. What I eventually discovered was a program that works for me, and I’ll share that momentarily, but I thought it might be worth sharing some of the geek-oriented fitness information I tracked down.

Lots of you are likely familiar with John Walker’s Hacker’s Diet. Walker approaches weight loss as an engineering problem, turning the program he developed into a book and a set of minimalist technological tools to help geeks get with the program. From The Hacker’s Diet: How to lose weight and hair through stress and poor nutrition:

I’m not a doctor.  Nor am I a nutritionist, psychologist, sports hero, gourmet chef, or any of the other vocations that seem to qualify people to tell you how to lose weight.

I’m an engineer by training, a computer programmer by avocation, and an businessman through lack of alternatives.  From grade school in the 1950′s until 1988 I was fat–anywhere from 30 to 80 pounds overweight.  This is a diet book by somebody who spent most of his life fat.

Through all the years of struggling with my weight, the fad diets, the tedious and depressing history most fat people share, I had never, even once, approached controlling my weight the way I’d work on any other problem: a malfunctioning circuit, a buggy program, an ineffective department in my company.

As an engineer, I was trained to solve problems.  As a software developer, I designed tools to help others solve their problems.  As a businessman I survived and succeeded by managing problems.  And yet, all that time, I hadn’t looked at my own health as something to be investigated, managed, and eventually solved in the same way.  I decided to do just that.

This book is a compilation of what I learned.

In addition to Walker’s basic spreadsheets, The Hacker’s Diet has inspired a number of geek-oriented tools, like The Hacker’s Diet Tracker and The Physics Diet. There are also tools for the Palm OS. The program has geek cred in spades, and it follows simple principles. A good option for GeekDads.

If your gadget fixation leaves you short of cash for the gym, or your geeklets leave you short of time for same, consider Leo Babauta (six kids, blogs and writes for a living…yep, geek). Earlier this month, he posted a good piece on creating a minimalist fitness program, designed to go easy on both the fiscal and temporal budget. Leo’s own workout relies heavily on bodyweight exercises, which don’t require any additional equipment, and he provides a list of minimally-equipped exercises as well. He doesn’t stop there, either. Last month he laid out a sample healthy meal plan, and the month before that, five steps to go from sedentary to running. Leo’s a serious geek, and serious about fitness.

Professional geek and fellow Machead Mark Faithfull’s book The Geek Diet is less a diet plan and more a philosophical basis for losing weight. Faithfull focuses primarily on diet, leaving exercise as…well, an exercise for the reader. But his rules are solid, simple and easy to remember, relying heavily on principles of mindfulness and proportion. If you elect to pick up The Geek Diet, you’ll want another source for a serious exercise program. Or you might consider pairing The Geek Diet with a basic fitness program like One Hundred Pushups or The Couch-to-5K Running Plan.

There’s lighter reading to be had in the geek fitness realm as well. Kuro5hin denizen TheophileEscargot offers the short and slightly snarky, but entertaining Fat Bloke’s Guide to Becoming Less Fat. For more amusing motivation, check out Richard Muller’s The Physics Diet. Pro geek Chris Pirillo also has a grab bag of fifty tips for losing weight and getting fit. For more useful data, regardless of which plan you choose, try the calculators at Calories Per Hour and the nutritional statistics at NutritionData. If it’s motivation you need, try the GeekFit blog and podcast.

In the end, all of these plans and tips revolve around this simple fact: to lose weight, you must consume less, and move more. Adding muscle mass is a variation on that theme, but doesn’t change the central fact. Ya gotta burn more calories than you shove in.

So which plan did I pick?

None of the above. None was as comprehensive as I wanted. I was looking for a thoroughly laid-out meal plan, combined with a specific course of exercise that included weight lifting to build muscle mass (for guys, who thanks to biology can typically add muscle pretty easily, this is a handy way to help burn more calories even at rest).

In the end, I opted for a plan created by fitness geek James Orvis, and set forward in his energetic, if sometimes badly edited Weight Lifting Workouts and Diet Plan That Work. Orvis gives the reader simple, clear directions for eating smaller, healthier meals, and he provides serious weight lifting and cardio routines that give enough variation to avoid boredom, and work their way up in difficult over 3 months. That’s enough in and of itself, but Orvis’ writing really make it worthwhile. He believes what he’s talking about, and makes you really want to get up and do the work it takes. In addition to Orvis, I’m also working the One Hundred Pushups program. As I write this, I’m exactly halfway through each.

Has it worked? Yes. In January, I tipped the scales at 245. By mid-June, for a lot of reasons that didn’t involve any actual effort on my part, I’d dropped five from that. In the six weeks I’ve been following my workout regiment and eating more carefully — largely following the Orvis plan, but with a lot of help from Leo at Zen Habits — I’m down a further ten pounds. That’s a safe pace of weight loss that I’m happy with, especially considering that I’m adding muscle mass at the same time. Believe you me, it’s a trip to hear the geeklet exclaim over Daddy’s new "big muscles."

That’s just me. What works for you will be different, but there are lots of options out there, for the full spectrum of GeekDads. You don’t even need equipment — just time, dedication, and motivation. For me, the Dad half of the GeekDad label was motivation enough. The comments are open, so tell us what works for you. What gets you off the couch? What resources help you when the urge to play just a little more Guitar Hero nearly overwhelms the workout schedule? Does Wii Fit actually help? Sound off, and let’s take a little bite out of the "flabby geek" stereotype!

Gonna Do It All: GeekDad Interviews Jaret Reddick