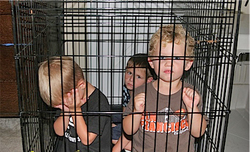 Congratulations to GeekDad reader Michelangelo Grigni who receives a $50 gift code to ThinkGeek! Thanks to all who submitted solutions. Check out the solution after the jump to receive a $10 off your next $30 purchase at ThinkGeek!

BadDad may care a great deal about the kids touching his stuff, but he is generally lax when it comes to dangerous equipment. Xerxes,
Yervant, and Zed were playing with the cool wormhole generator BadDad brought home recently and suddenly found themselves facing a hostile reception on an alien planet. Now they are in prison and must get out as soon as possible before the generator loses its charge.

The prison is surrounded by a courtyard and outer wall.
Heavily-armed guards stand duty. Using their keen powers of observation, the kids have devised a plan to escape through the window of their cell and over the outer wall at X. 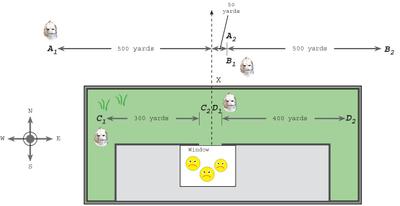 The guards start from points A1, B1, C1, and D1, and march up and down their watch at a regular speed of 100 yards per minute (no need to include turning time).

The kids can only hope to escape unseen if they do it in the dark, one kid at a time, as long as each kid has a clear two minutes with all the guards at least 100 yards away. It is dark enough for their attempt at 9:00 p.m. by their Earth watch. At that time, new guards come on duty.

At what time should Xerxes, Yervant, and Zed escape?

Solution
Find the range of times at which the guards starting from A1, B1, C1, and D1 are out of range (more than 100 yards away).

Xerxes, Yervant, and Zed find the first three periods of two minutes or more that are common to all of these ranges. They are:

They slip out unnoticed, jump back to Earth, and BadDad is none the wiser.

ThinkGeek coupon code PUZZLER will give all readers $10 off their next purchase of $30 or more excluding shipping and taxes. Code expires
10/31/08. Enjoy!

The Geekly Reader: Any Which Wall by Laurel Snyder