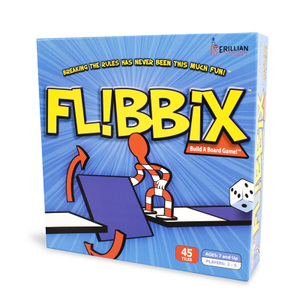 My five-year-old daughter swapped two of the tiles on the game board, moving a "Switch with Opponent" one to right near the Finish tile (which was where the Start tile used to be) because my wife and I were in the lead.  "Remember," she said, an impish grin lighting up her face, "I’m eeeevil!"

We were playing Flibbix, a new family board game from Merillian Games in which you configure the board and the rules before you start, and then change the board around in the middle of the game.  It comes with 45 plastic tiles that snap together magnetically, which helps you both keep the board together and ensures that you orient the tiles correctly when assembling them.

Before you play, you have to create a board, which is a bit of a hassle if you have two kids "helping" you, but fortunately the people at Merillian provide several example layouts in the game guide and more on their website, so you don’t have to think too much about it unless you want to.  Once you’ve set up the board, you have to customize a few rules on a rule sheet (the game comes with a pad, and the website has a PDF you can either fill out on your computer or print out), like how to figure out who goes first, what happens when you land on a Custom Tile, what happens when you land on another player’s space, and so forth.  Once you’ve done that, you can actually play the game, but fortunately it doesn’t take as long as it sounds like it does.

Game play is quick and easy, your basic move-around-the-board-to-the-finish-line game, but with a few cool but easy twists: Sometimes you can flip over tiles, changing what their effects are, or swap tiles as my daughter did, or even completely reverse the board (as had happened before my daughter’s move).  There are also cards that, in a sort of Cranium style, allow you to move ahead if you hum a tune or name animals that start with letters of the alphabet, or that sort of thing.  My kids had an absolute blast playing it, laughing their heads off at the back-and-forth nature of the game.  For a nice change of pace from most kid-friendly board games, my wife and I enjoyed it quite a bit as well, though I think that was largely because the kids loved it.

to anyone with kids—the box says ages 7 and up, but I think many slightly younger kids, like my daughter, will have no problem with it provided someone helps them read the cards and tiles.  I would make a strong suggestion based on my personal experience with the game:  If you’re playing with kids younger than around 10, assemble the board while the kids are elsewhere.  Because otherwise, if your kids are anything like mine, you will feel, as the saying goes, like you’re being pecked to death by ducks.  Older kids will, I suspect, want to assemble the board without your assistance.

In short, it’s not a game you’re likely to pull out at your next grown-up dinner party.  But your kids will almost certainly get a big kick out of it.

Winter Is Coming, But New Game Of Thrones Trailers Are Already Here