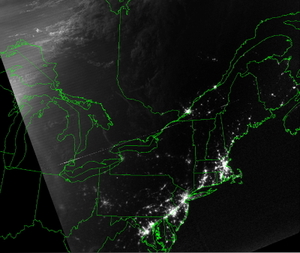 It’s been 5 years to the day since much of the Northeastern United States and the Great Lakes region of Canada lost power during what would quickly become the largest power blackout in North American history.  Residents in 8 US States as well as the Province of Ontario lost power for up to four days in the summer heat.  In all, roughly 50 million people were impacted when the grid began to go down on the afternoon of August 14, 2003, after a series of failures traced back to Ohio.  Have a look at the infamous “7 hours after” picture (courtesy of NASA).  Can you see Detroit on the map?  Toronto?  Me neither…

My blackout experience and more, after the jump.

I was just leaving my company’s downtown Toronto office around 4pm on August 14.  Usually my luck is classified as black, at best, but I was clear of the building (and not in an elevator), out of the parking garage and had hit the highway for my home in London, literally as the downtown of Canada’s largest city became paralyzed in gridlock just behind me.  Oblivious to what was going on, I continued on my way, noting only that highway traffic seemed lighter than normal while there were increasing traffic back-ups at all the major exits (where the offline traffic lights combined with rush hour were playing havoc with city-bound traffic).  Listening to CDs, I never picked up on anything on the radio and even when I pulled into a service station about two hours out of Toronto only to find the gas pumps and restaurant drive-through lanes chained off, I simply wrote that off as an unfortunate fire or maybe a gas leak.

An hour later, I discovered a line of cars stretching for several miles, waiting to exit the highway for London.  No offense to London, but nothing here is interesting enough to generate that kind of volume.  At this point, something strange was obviously going on, so as I sat in the traffic jam slowly inching my way toward home, I finally turned on the radio.

Theories ran rampant at that point.  9/11 was still fresh in peoples’ minds and the idea of the entire Northeast power grid going down seemed all too likely to be a possible terrorist attack.  Reports were coming in from New York, Cleveland, Detroit, Ottawa, Buffalo and Toronto and no-one seemed to have a definitive idea yet as to what had happened and exactly how extensive it was –just that it was “big.”

My cell phone wouldn’t acquire a signal, so I couldn’t call home.  My wife and kids (then a 3 year old and 1 year old twins) had no idea whether I was stuck in Toronto or stuck in traffic.  Sitting in a car in 90 degree heat, moving forward at a snail’s pace while watching that fuel needle start to move closer to red, stewing about what catastrophe might have happened (or just begun) and worrying about everyone at home was one of the more nerve-wracking experiences I’ve ever had.

In the end I made it home.  It took me close to 3 hours to cover the final 3 or 4 miles and 4 traffic lights between the highway and my house.  The next day and a half were a blur of heat, BBQing every meal (not a bad thing), lots of reading and coloring for my daughter, progressively warmer drinks and the challenge of dealing with baby formula without refrigeration or a microwave.  But like many people in the affected areas, I saw many positives as well.  We met more people in our neighborhood that first night than I had seen in the two years we had lived in the house; people were wandering the street with flashlights and bottles of wine, gathering on front porches for impromptu blackout parties.  The skies over the city, free of light pollution, were as star-filled as a northern camping vista.  We learned that people step up in times of emergency and people come together; at every traffic light I had to pass through, there was someone, usually a person in civilian clothing, standing in the middle of the road, calmly directing traffic.  And the drivers were actually following the directions, minimizing the chaos.  Neighbors checked on each other and offered to cook food for those who had no BBQs.

We were lucky and power was restored to our area in under two days, although we were subject to rotating blackouts.  My in-laws were out for close to four days and lost a large freezer packed with a side of beef they had just had delivered the previous day.  My luck may have rubbed off on them.

I suspect the blackout impacted the national psyche (in both Canada and the US) in ways that are still being felt.  In the aftermath, I took advantage of the situation to upgrade most of my camping gear, reasoning that it served the dual purpose of emergency equipment in the event of another blackout.  Five years later, I’m still particular about ensuring that the “battery box” is well stocked and flashlights are handy.  And I think you need look no further than the amount of shelf space gas-powered backup generators still command in many stores (where they used to be specialty items geared toward construction or RV use, if they were stocked at all) to realize that five years later, we’re still not entirely sure we trust the system.

Finally, making light of a dark situation (ouch- bad pun, but it’s getting late), many cities have taken up an annual Blackout Challenge on August 14th.  The anniversary of the event has become a symbol to encourage people to cut down on their electricity use and their reliance on the power grid.