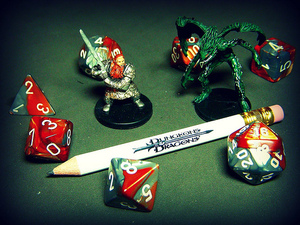 In my ongoing quest to discover new and fun ways to make my new D&D 4E campaign run as smoothly as possible, I’ve run the range from amazing free fan-made supplements to store-bought purchases from my FLGS

After investing a little hard-earned scratch on some of these fun toys, I’ve found a few products that have a permanent place at our gaming table. With just a single session with some of these things, I realized that I’d never go back to playing without ’em. 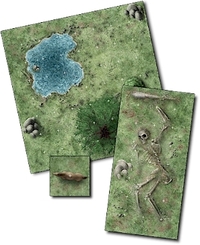 D&D Dungeon Tiles: Most other tables at the store where we play use the super-cool Tact-Tiles, modular dry-erase surfaces that let you build a customizable battle grid. Sadly, Tact-Tiles are no longer for sale, and while you can certainly make your own, I’ve found that using the official D&D Dungeon Tiles work just as well. They’re very heavy duty cardboard tiles that you can pop down on the table for battles. Even better, they’re less than $10 a pop.

Descent: I’ve already written about playing Descent as a stand-alone game, but one of the great benefits of owning a copy of Descent and also running a D&D campaign is that you can use the modular Descent dungeon pieces in both games. I rarely map out rooms in advance. Now, I just think up an encounter, draw a rough sketch, and then plop down tiles to build the room on the fly. It works great, and I can change the layout of the room if necessary. 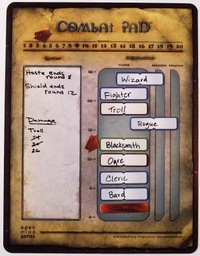 Open Mind Games GameMastery Combat Pad: Of all the things I bought, this one takes the cake. The Combat Pad is a portable wet/dry erasable board with a steel core. It comes with nameplate magnets, so you can easily place all of your combatants in initiative order and keep track of complicated delay or ready actions. Initiative has always been one of my least favorite aspects of Dungeon Master bookkeeping, and I have a bad habit of ignoring players’ turns, but with the Combat Pad on hand, I had no trouble keeping the action moving along.

D&D Miniatures or Reaper Legendary Encounters Miniatures: To be perfectly blunt, I was a little miffed when Wizards started selling their D&D minis in randomized boxes. It may work for the collectible minis game, but as a Dungeon Master, I want control over what I’m buying. Pre-painted is fine, because as much as I enjoy mini-painting, I just can’t keep up with the monsters my group encounters week-to-week. If I know the party is going to run into a group of hobgoblins, I want hobgoblins on the table. And I don’t want to buy fifty booster packs just to get what I need.

The Reaper pre-painted Legendary Encounters sets are good, but the paint jobs are not as classy as the WotC figures. Instead, I’ve been raiding my local gaming store’s loose miniatures shelves.

Most better gaming stores will have a glass case near the checkout with a large assortment of the pre-painted D&D Miniatures. Common figures, including the standard fare in your average heroic tier dungeon, are usually very cheap (I get ’em for $1 a pop at the always-awesome Sci-Fi Genre store where I play), and you can buy the ones you want.

What about you? Any toys at your table that you can’t live without?

You Won’t Need Mother in Order to Decipher Alien Vault