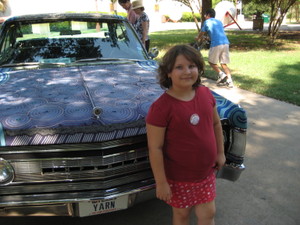 The kids and I spent a great Saturday at the Dallas Museum of Nature and Science for an Afternoon with Maker Faire.

There were about 10 groups setup and I’ll pull together a few posts later this week about them.

Travis’ favorite groups were ArcAttack and the Dallas Personal Robotics Group.  Hannah really liked the Yarn Car.  I liked Arc Attack’s tesla coils, the analog clock, and it was fun to see the and play the cigar box guitar that Sherry and Katie brought with them from the Make headquarters.

We were accompanied by my good friend Ed, and met up with a GeekDad reader, Steve and his family.  We met a lot of cool Makers and had a very good time.

A quick search returns a good Flickr set of the event.   Ed and I both took some photos and I’ll provide links to them in the comments when we get them uploaded.

I’ll have a couple more posts this week when I get the photos and video uploaded to Flickr.

This was a great event, and I seriously hope they do one next year.  I definitely have enough projects running to have 3 or 4 somethings to show.

Here is a link to my Flickr set: 2008 Afternoon with Maker Faire