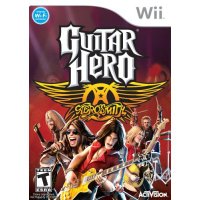 I’ve been wanting a second guitar hero guitar for a while now so the Geeklet and I can rock out together on the Wii.  I stopped by the local game store with the intent of getting a cheap wireless guitar and quickly became distracted by Guitar Hero Aerosmith.

Game play is similar to GH3, but instead of trying to make it as a band, you are following along as Aerosmith tries to make it as a band.
Each set of (4) songs starts out with 2 opening acts from other bands, one
Aerosmith song, and one Aerosmith encore.  Unlike GH3 there aren’t any battles until near the end when Perry wants to take you on head to head.  I don’t think the lack of battles detracts too much, but I had expected more.

I have not beat the game yet, but so far (2/3 done) half the songs are challenging, and fun, the other half I found to be a little boring.
The geeklet, who has never heard any of the GH3 or GH Aerosmith songs thinks they are all great, fun, and challenging.  Time will tell if it holds interest as well as GH3.

I’ll give the game a 5 out of 10, since it isn’t a complete loss.  I am sure we will get plenty of hours of shredding out of the second guitar, and the game is playable and at least half the songs are fun.
Besides, the red and white Aerosmith face plate does look totally awesome hanging next to my TV.

I purchased the Guitar Hero Aerosmith Bundle for Wii, but if you already have two guitars (or want to buy a cheaper third party guitar) you can get the game alone.